Eating like a local:
Regional food specialties
- Indy: More spots where the locals eat at

I was back in Indianapolis a couple times this past Winter and now have a few more rich stops to add to my folder of places worth eating at in the area. You can check Part One of this series HERE. First and foremost is Hank's Smoked Briskets. I will never go to or thru Indy again without stopping in at this place. Every other food stop in town takes a backseat in my pocket guide. 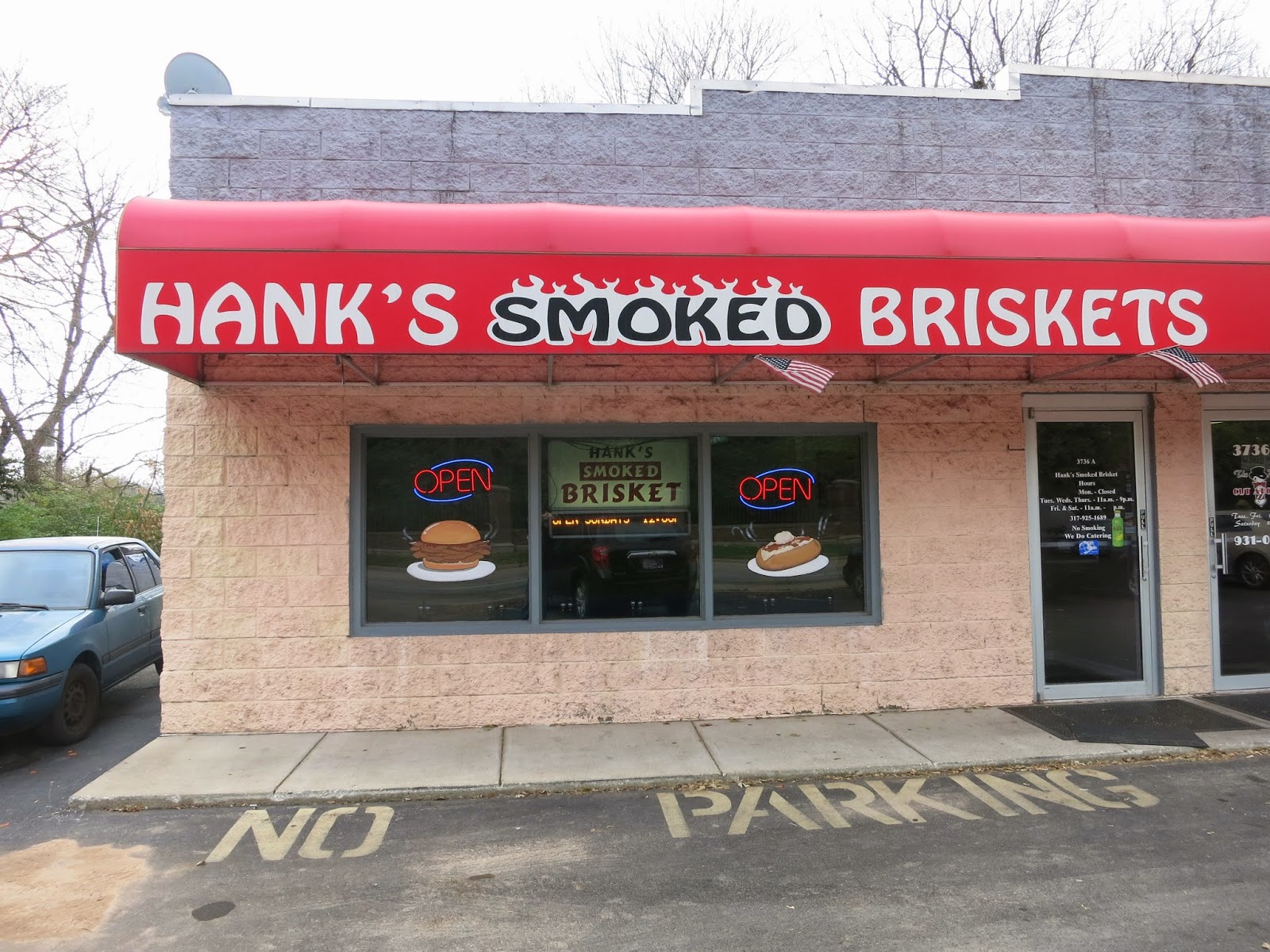 It doesn't matter where in America you are, if you're on an MLK Jr. Drive there's BBQ nearby

In the case of East Indy, there's some top of the line brisket as well as smoked corned beef. Hank's is attached to a popular neighborhood barber shop and basically does takeout. I believe we (Grub Seeker was w/ me) got a 1/2 pound of each, it was taken out to the lot to dine al trunko. Hot Damn! I hate playing the best game but this was the best brisket I've had outside the state of Texas. No question about it. Hell, it was as good as I remember some of the top spots I had on my semi recent trip down there. The corned beef further cements the claim of the Midwest being the King of salt cured beef. They smoke theirs here and that nice hint of it added in makes me wonder if I'll ever fully appreciate corned beef being baked or steamed again. 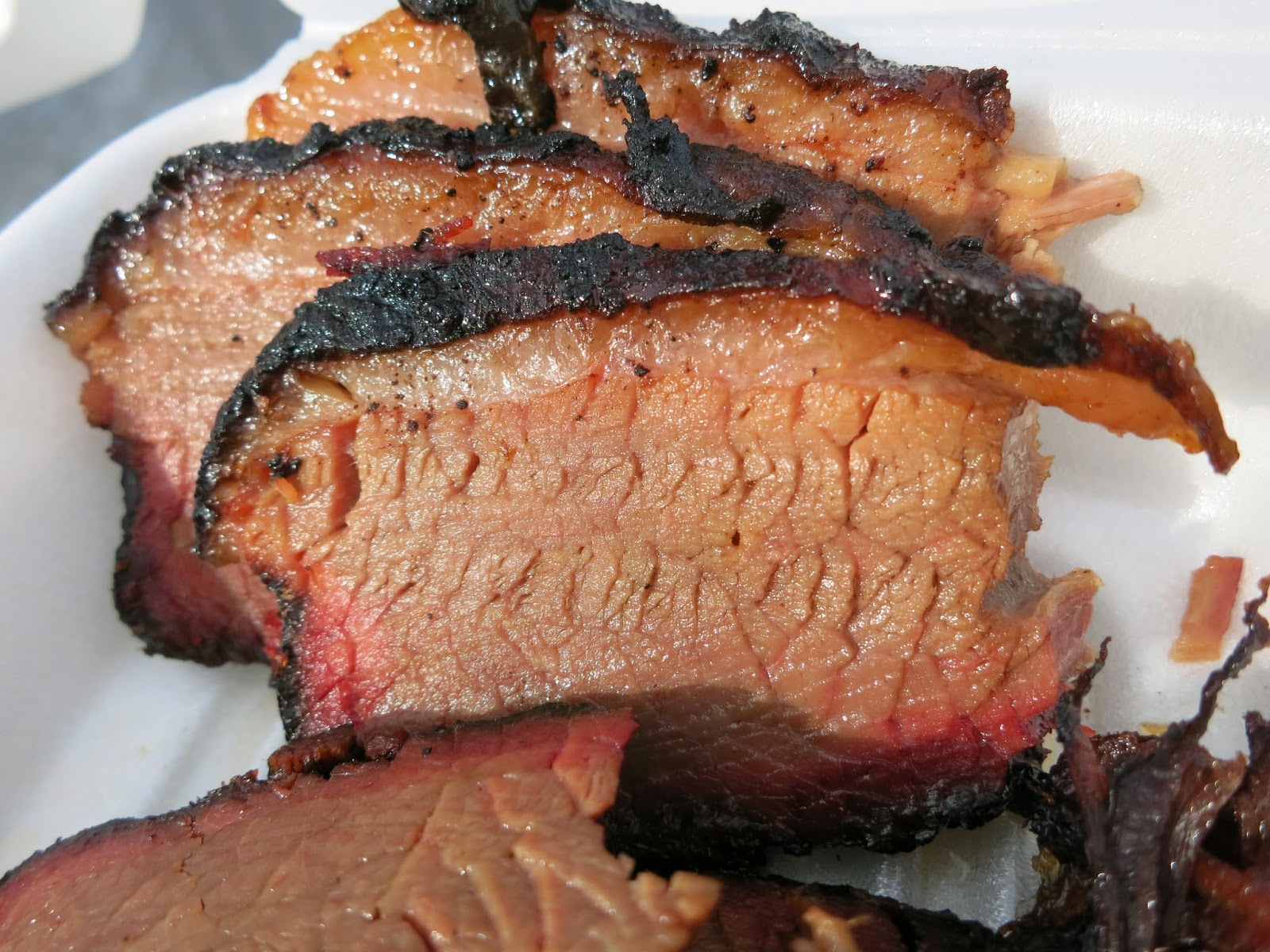 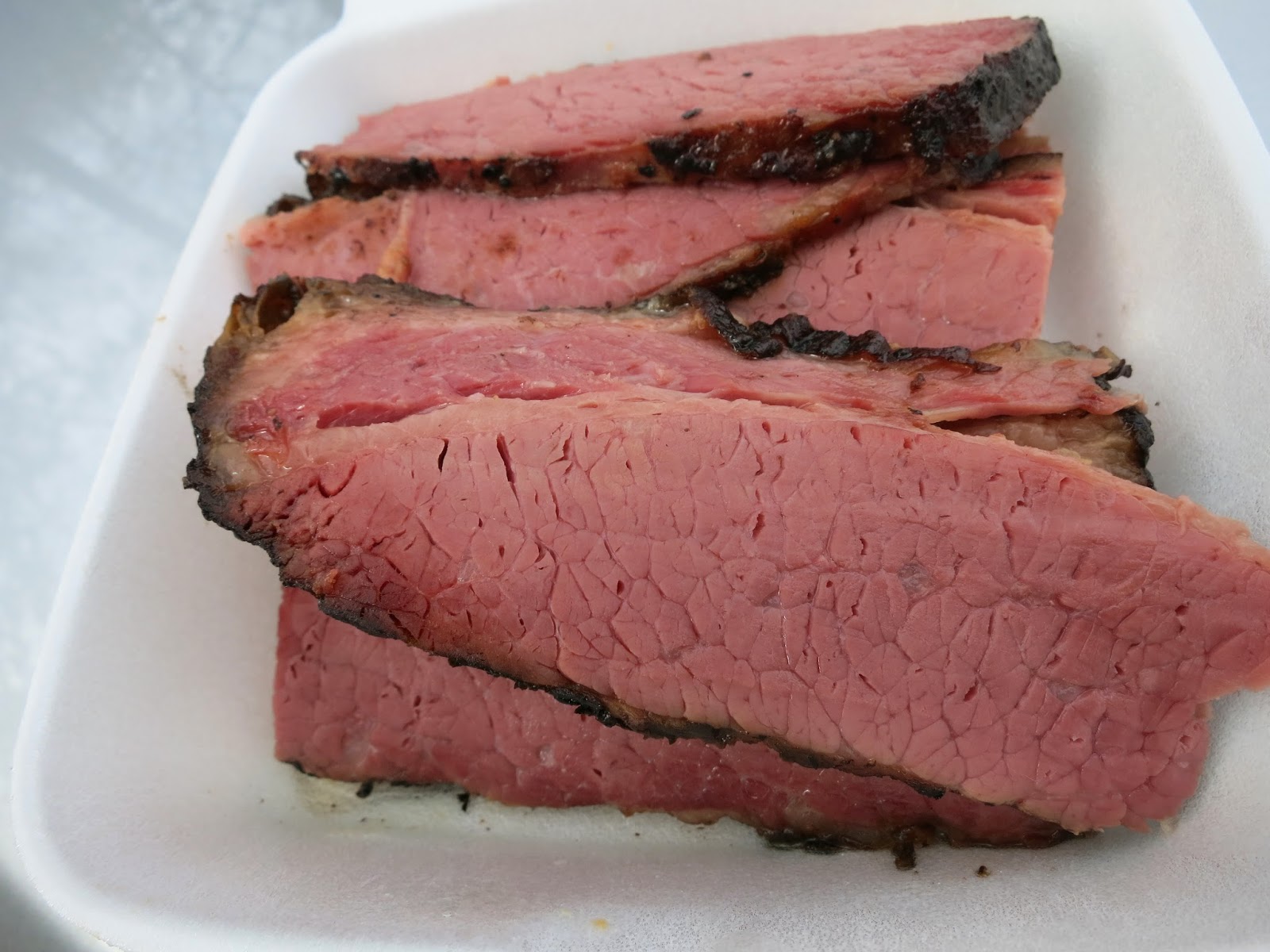 We stopped in for a snack at this Jamaican spot pictured below. It's run by the son of a Chinese-Jamaican, I think Grub Seeker was kind of surprised to see the man with a deep Rastafari voice on the phone was actually a small Chinese guy. Nothing new to me. Many places in the states serving Jamaican food are owned by Chinese people with family roots in Jamaica. The patties here are $1 and change and a little different as far as the dough goes compared to others I've ate. Though they still tasted great. It appeared they sell lots of frozen bags full of them. I'd have a few in my freezer if I was a resident there. 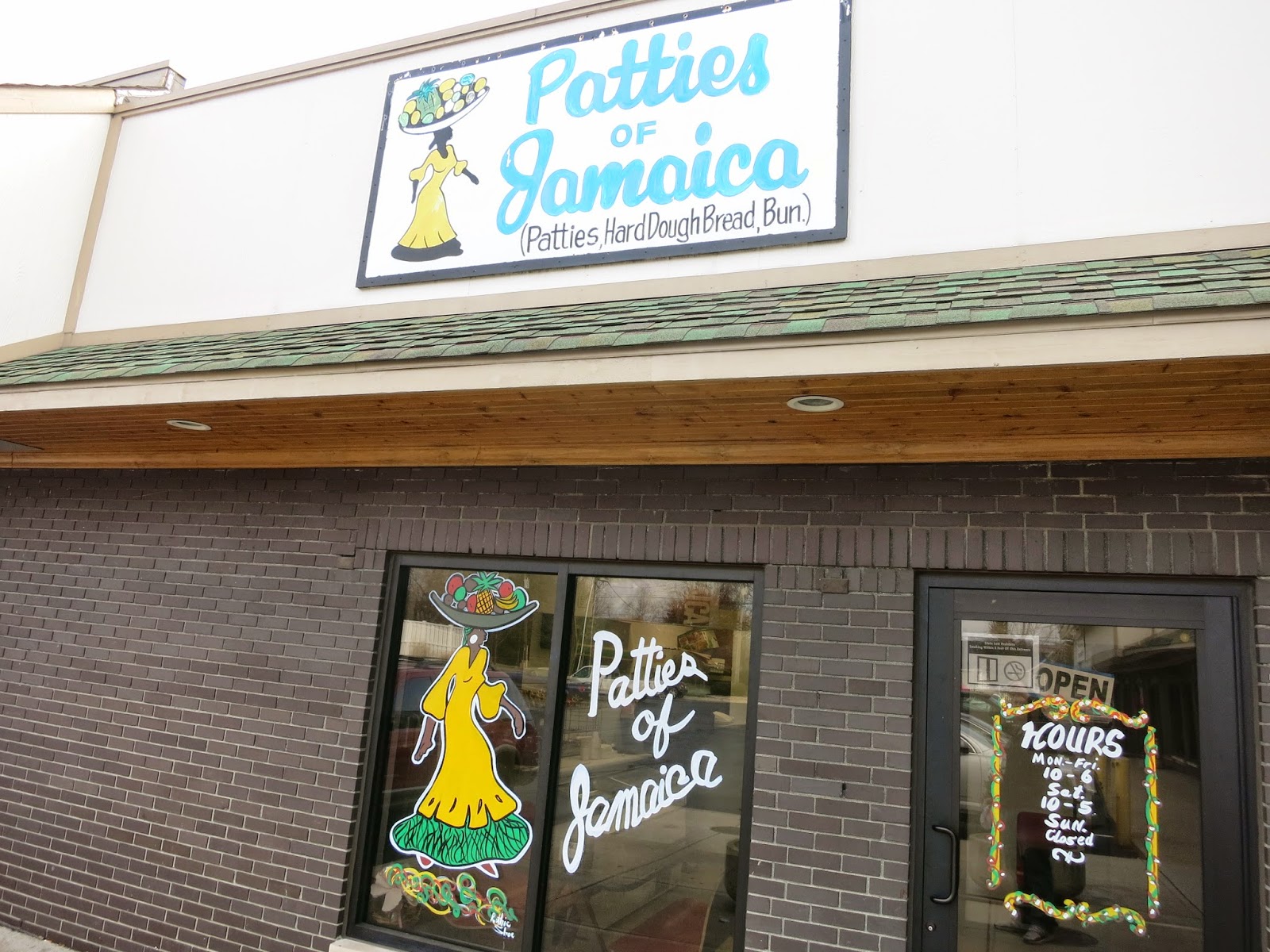 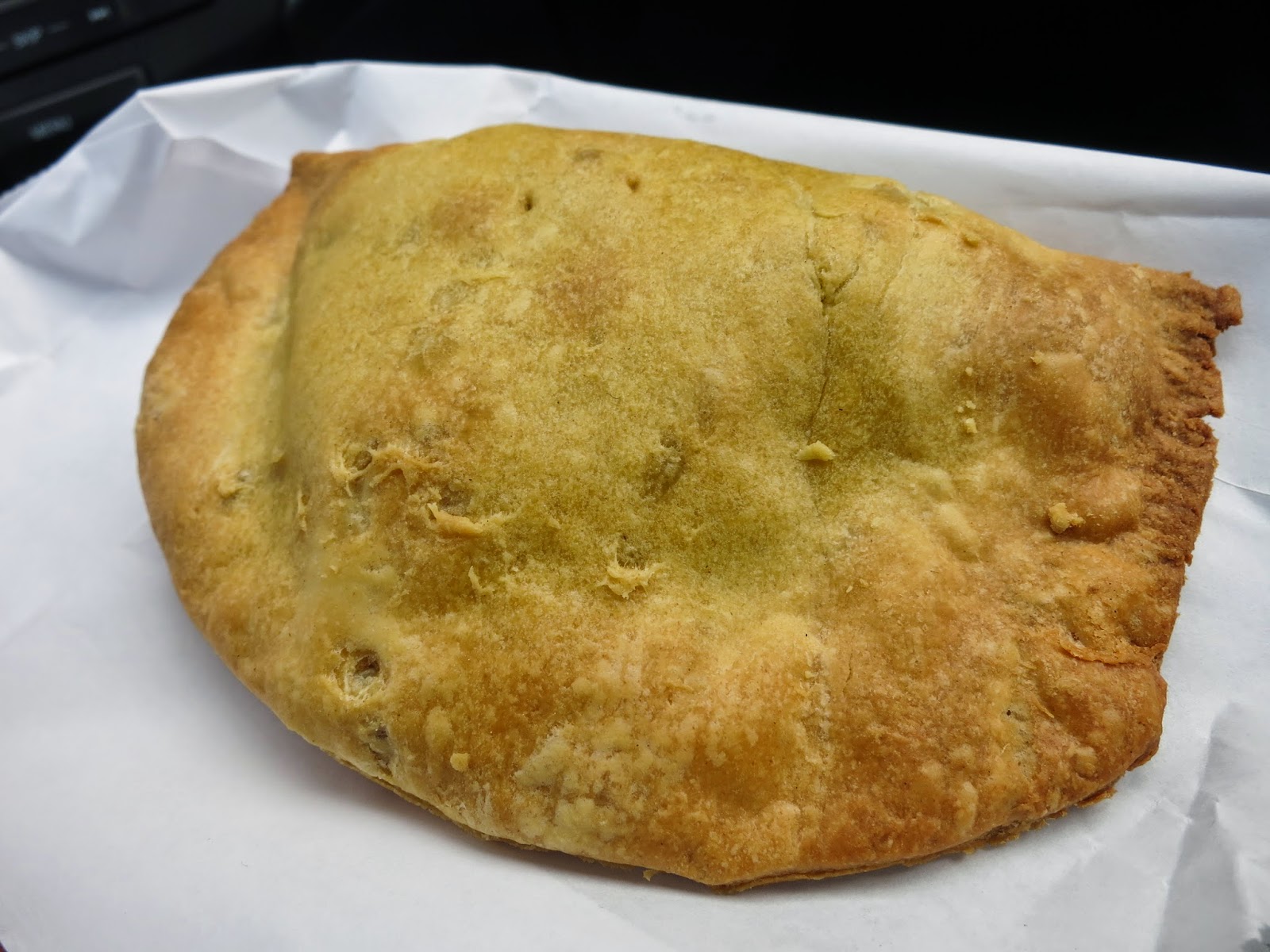 Hidden in a strip mall somewhere

There seems to be a small connection in Indianapolis to New Orleans. I'm not sure why this is but there's a few restaurants and bars down there that cater to the Bourbon street loving crowd. B's Po' Boy's I'd heard was really good and it was. The sandwich anyway. They get their bread shipped in from Leidenheimer Baking Company in New Orleans and the standard crunch that's needed is definitely there as you can see in the picture. The Gulf Shrimp were lightly breaded and the overall balance was spot on. I was just in NOLA, this was as as good as many you'll find down there.The red beans and rice and also the gumbo weren't quite on par with the sandwich as they each seemed to be too heavily seasoned with herbs. 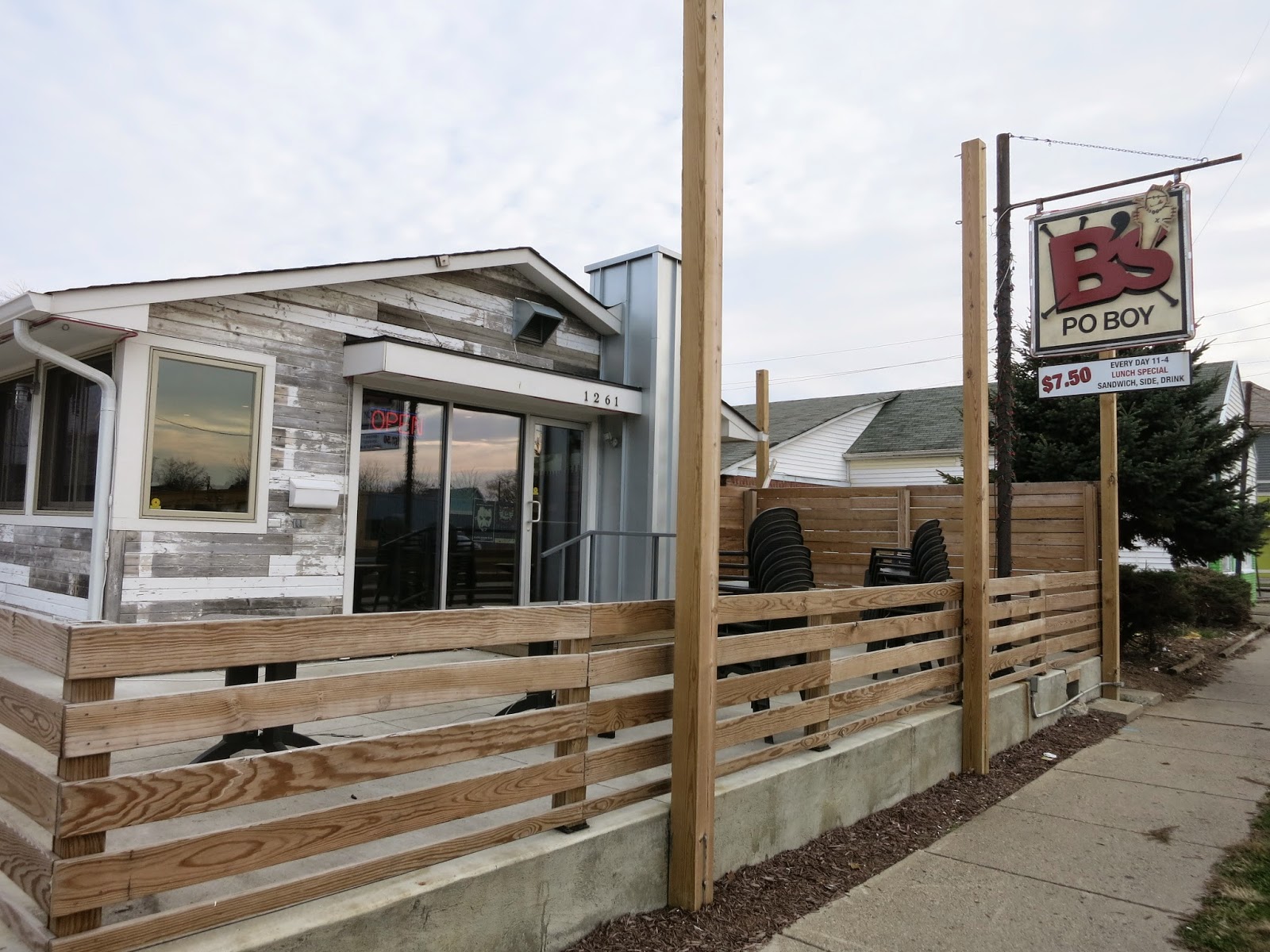 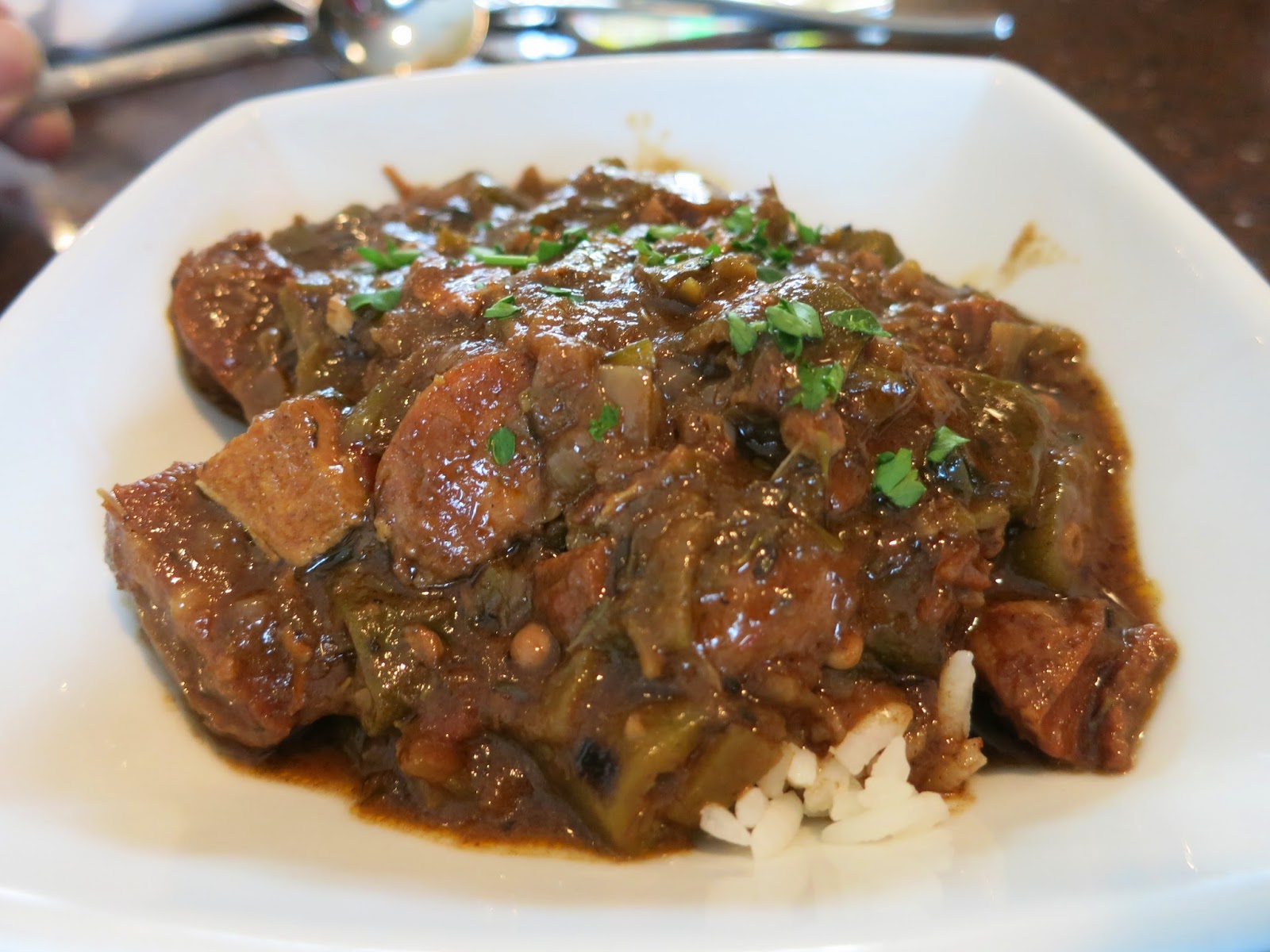 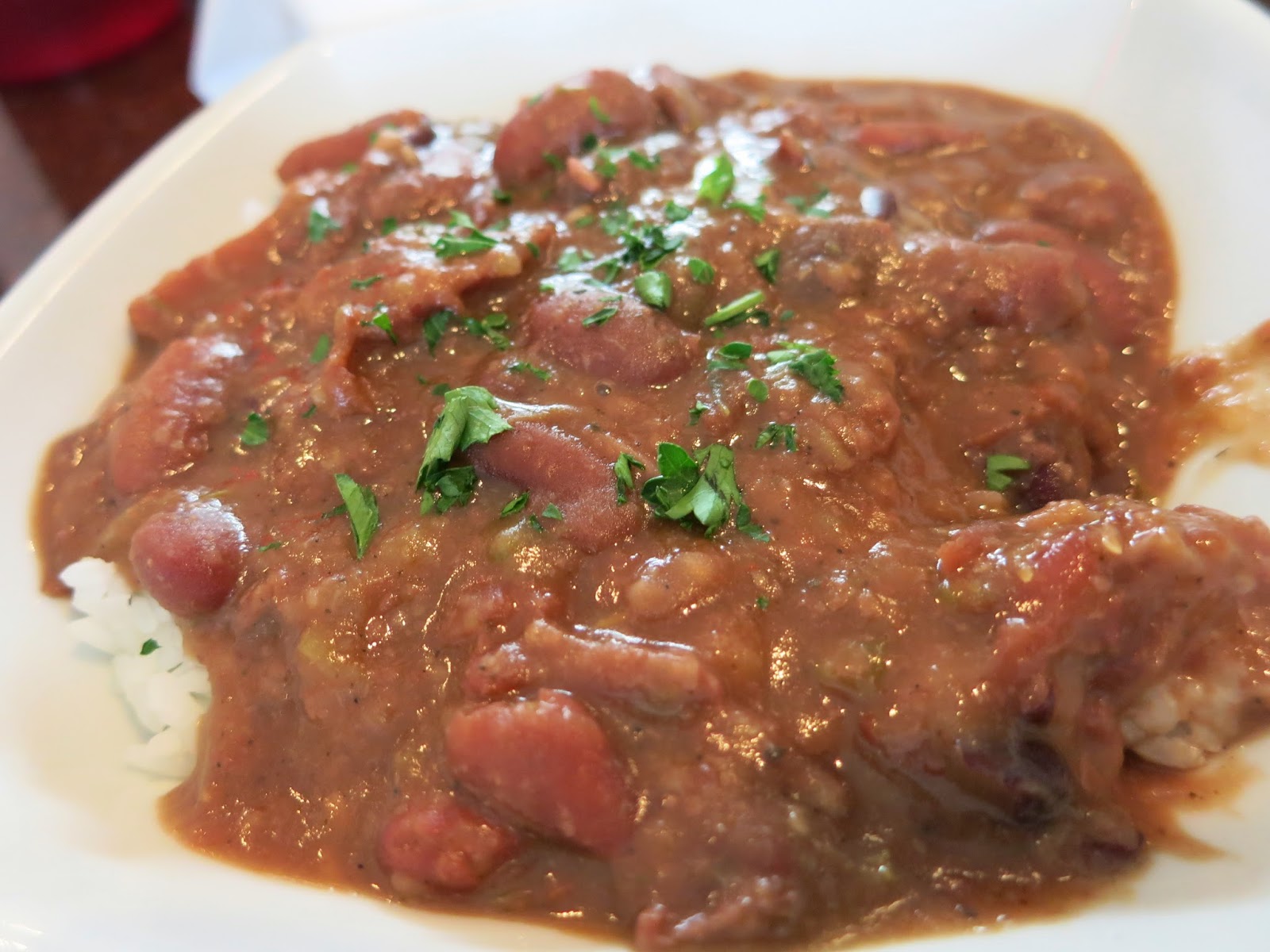 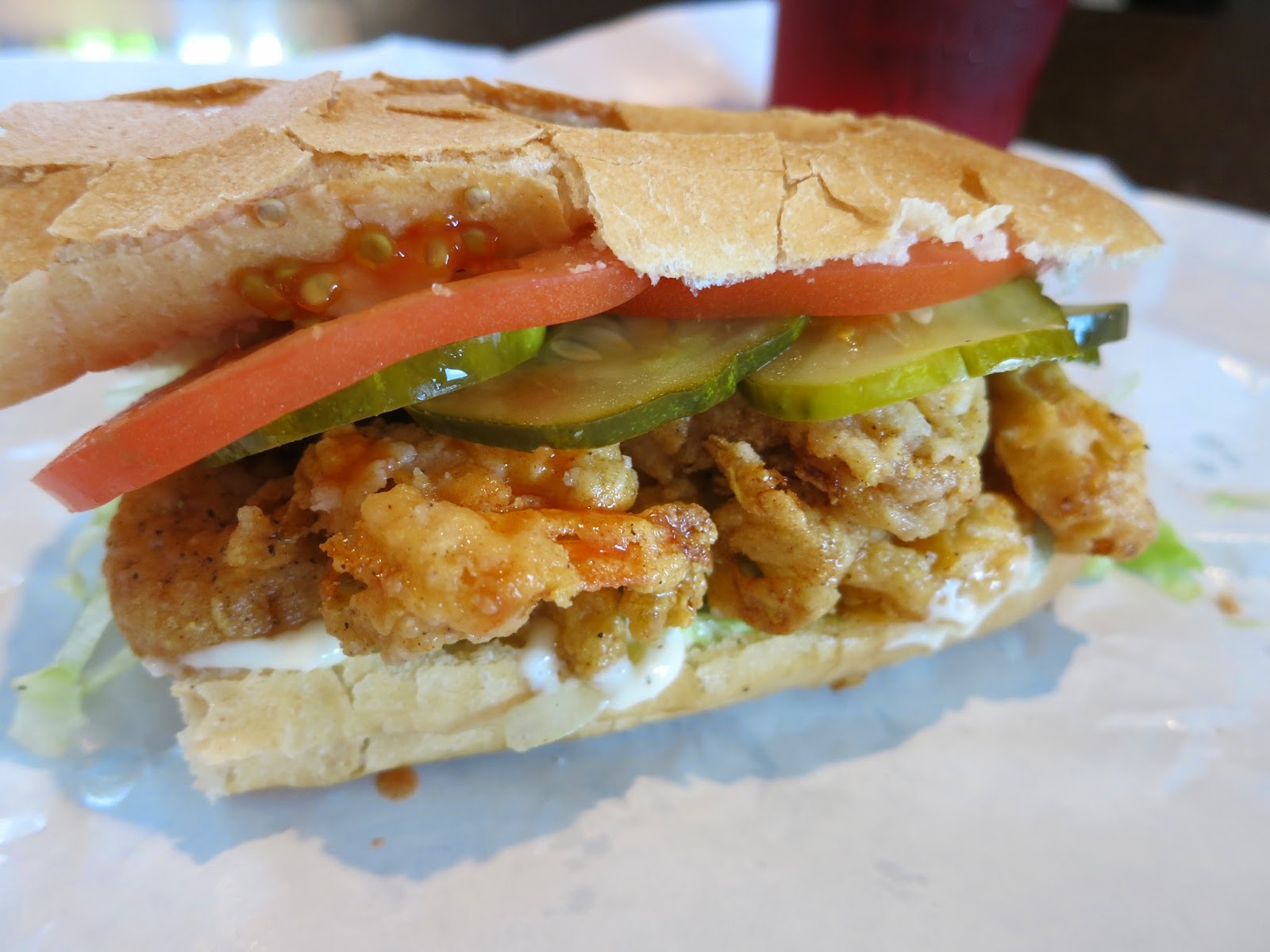 Iaria's is a classic old school Italian-American joint. It was packed on this Saturday night but we manged to squeeze a couple seats at the beautiful bar where the keeper had obviously been working for what seemed like forever. I couldn't resist trying their famous spaghetti and meatballs and they were good for what they were. I can make better but they itched the sudden fix I got for them upon entering. The old school ovens in back were more to the eye than the pizzas coming out of them.

We also ate a couple tenderloins on this trip which would also be the point where I dropped my camera in some water. I still had a crappy iphone cam and was able to snap pics of the ones we ate after the camera went bye bye. Nothing out of this world but I'm not sure they ever are, still I thought the couple we tried were respectable and I enjoy eating them when riding thru both Indiana and Iowa. They're comforting, no doubt about that.We enjoyed some food and drink at a really low key locals place called Ralph's Great Divide. This little neighborhood favorite has been a part of the area since pre-civil war. The east end of the building anyway. 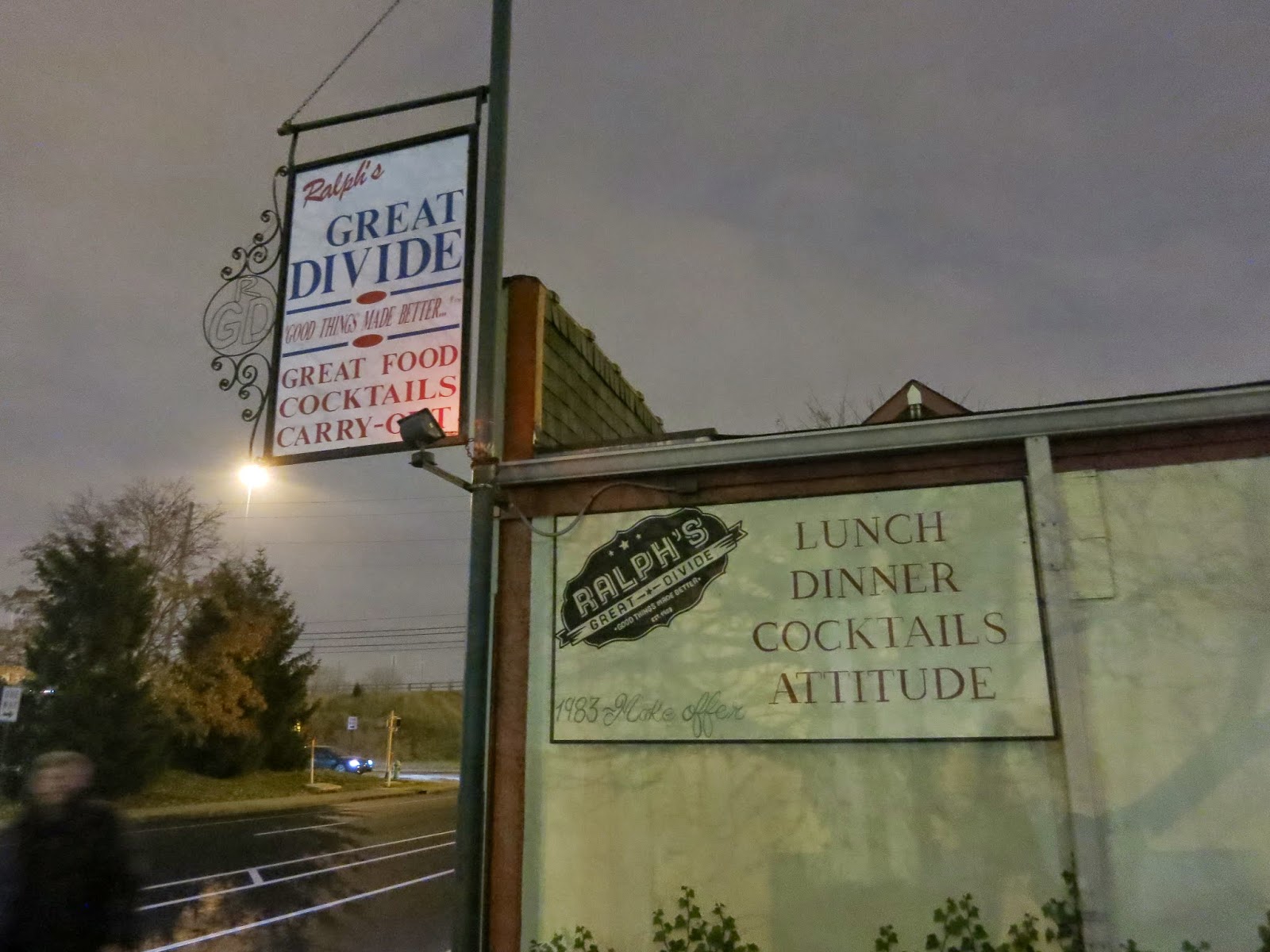 Thru the years it's been a part of a carriage, an auto repair shop and a pub post prohibition. It became Ralph's Great Divide in 1983 and has served their signature bourbon ham sandwich ever since then. While it is a bar, and a very cool one, it's more of a restaurant as far as hours and the reason patrons are there. I remember there being a guy on the piano on our visit as well as plenty of regulars enjoying their Saturday night. The aforementioned bourbon ham is described as "Slow Baked Pit Ham with Bourbon & Spices" and comes served on bread from a local bakery with the works if you want. I guess it's loved by many around here. I didn't love it, but I liked it. 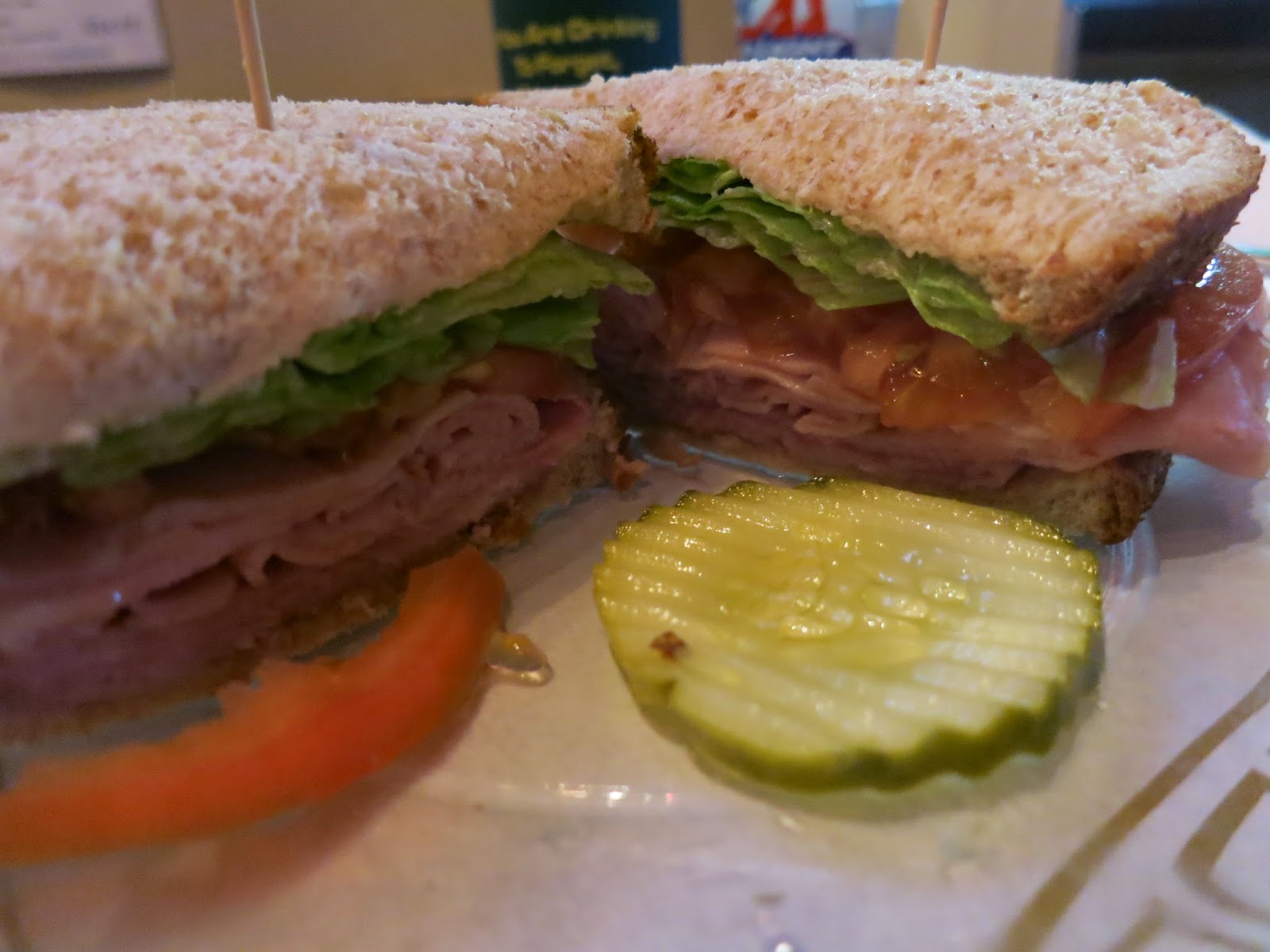 Famous Bourbon Ham Sandwich - "The One and Only"

I also tried an order of their signature German potato Salad (served warm) and got the "Tips and Aug" to go with it. The tips are 6 ounces of skewered tenderloin beef and the aug is their "Hot Pot Aug" which is a cream of potato au gratin soup. The German potato salad was stellar. I would enjoy that often if this place was my neighborhood haunt. The skewer and soup were solid too. Meat was tender and had deep beef taste to it while the soup hit the spot. I think it was like $11 for the combo so not a bad deal by any means. 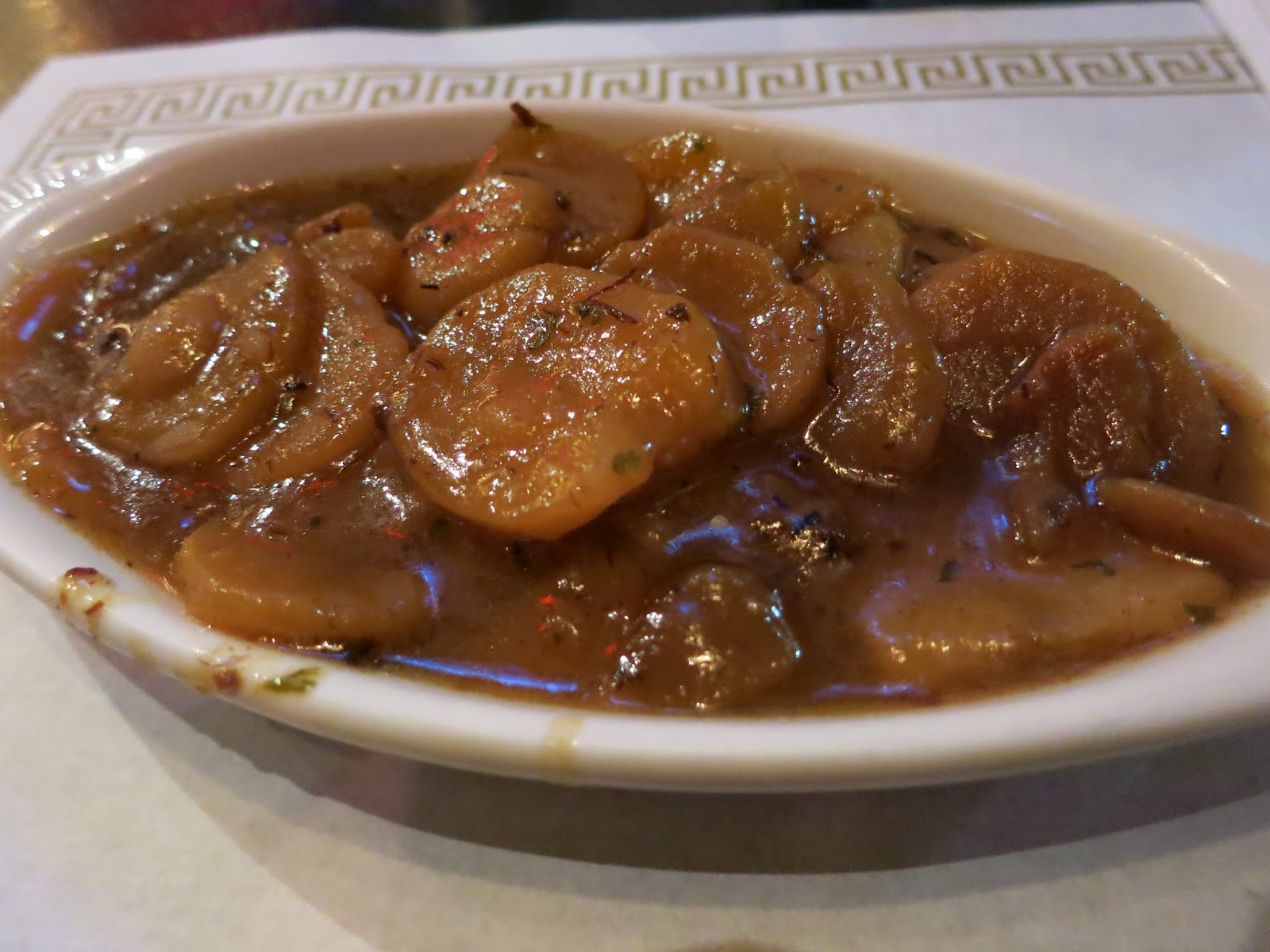 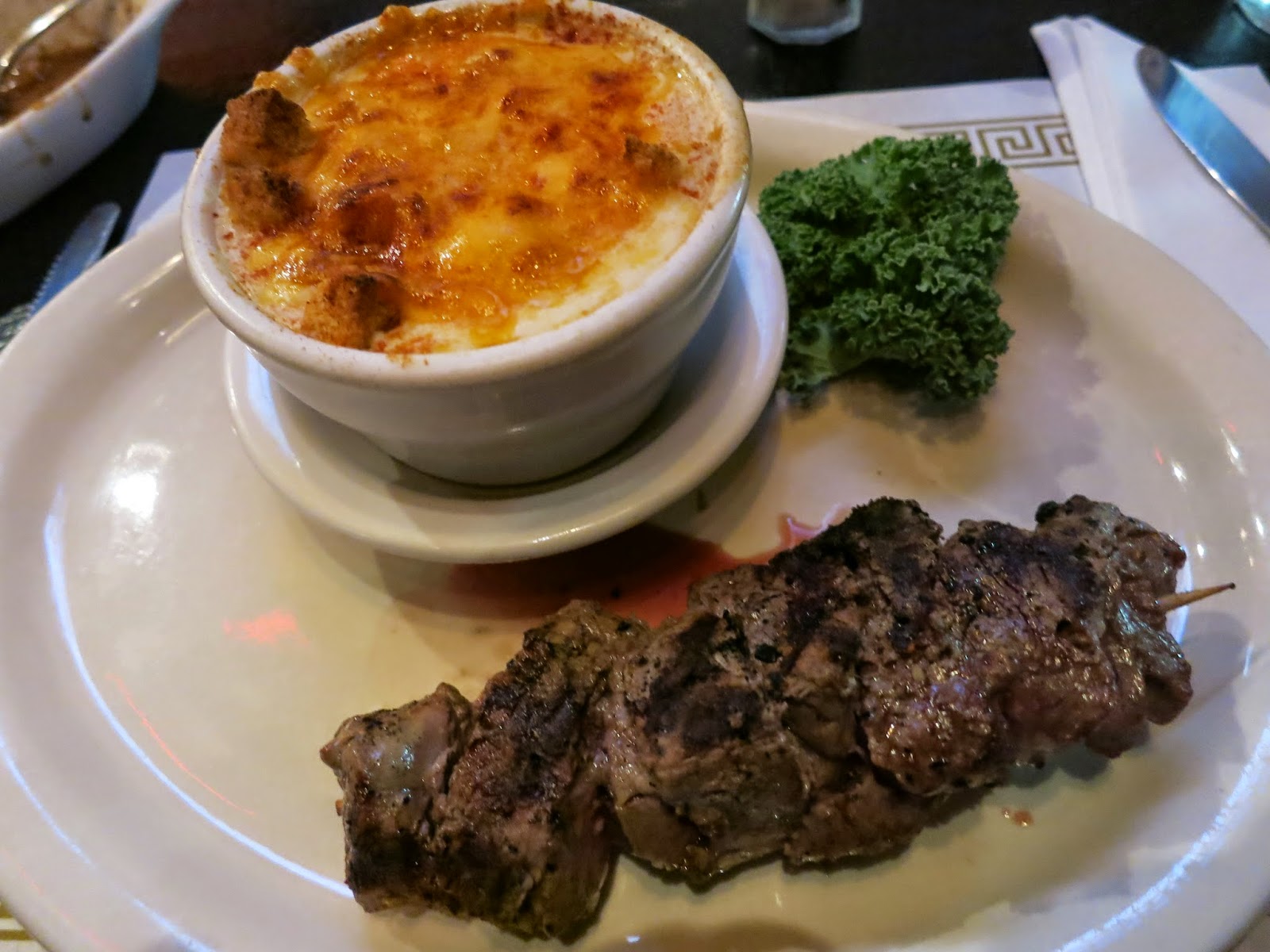 I'm always willing to try a place people will claim makes the best fried chicken in the country. Once you get into the Indianapolis region they start taking this all American eat very seriously. Some say the fried chicken trail starting around there and going further south is the best in the country. It's mostly served family style and seeing as how I was with the Grub Seeker we knew we'd be getting some from somewhere. That option would be this locally loved spot that's still frying their birds in a skillet which is what the restaurant is named after. 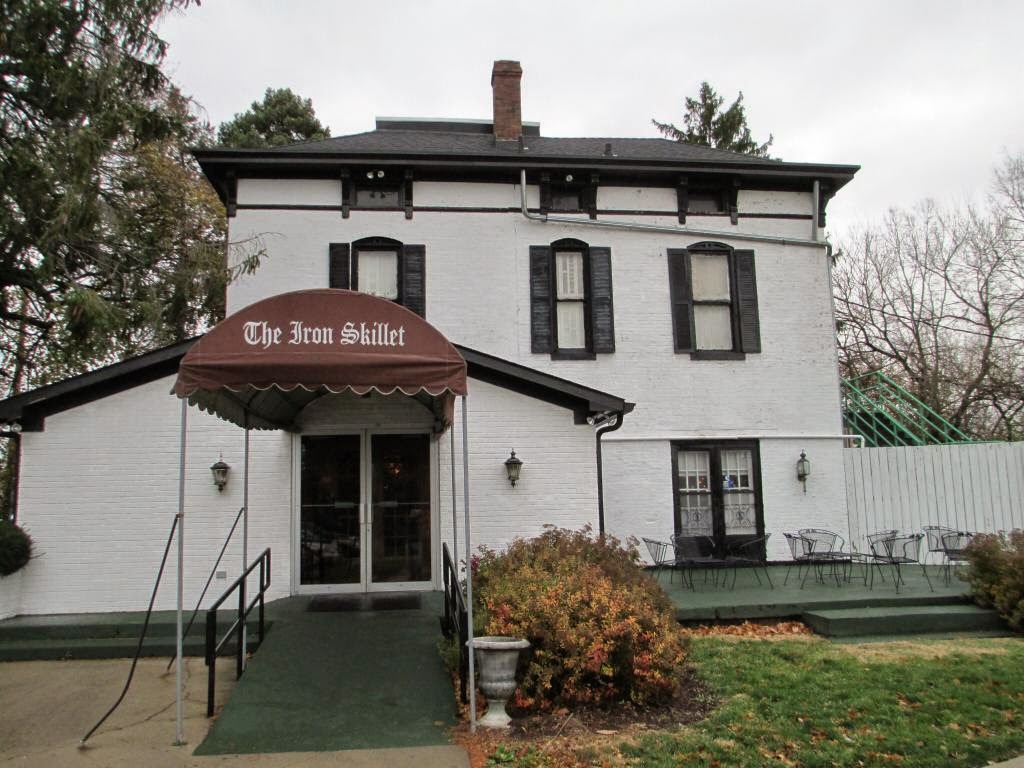 Not to be confused with the attached to a gas station chain restaurant, this place has some cool history. "In 1956 Mr. and Mrs. Charles E. Kelso bought the Wacker home and transformed it into The Iron Skillet Restaurant. Alterations in the structure were held to a minimum so as to retain the original charm which had graced the old home for more than a century. In 1996, Mr. and Mrs. Kelso retired and sold the restaurant to Mr. Ronald Torr." We went in on a Sunday afternoon and family's had just started flocking to eat. We decided to do a 8 piece carry out and both liked the simple style. The breading wasn't heavily seasoned but it was crunchy while the meat inside remained mostly juicy. I quite enjoyed my pieces but wouldn't say this is the best in the game. Then again, I have too many other places to try. Jim aka Grub seeker lives in the uber-rich in fried chicken Illinois Valley Region and like me he very much enjoyed it but wouldn't claim it was King. 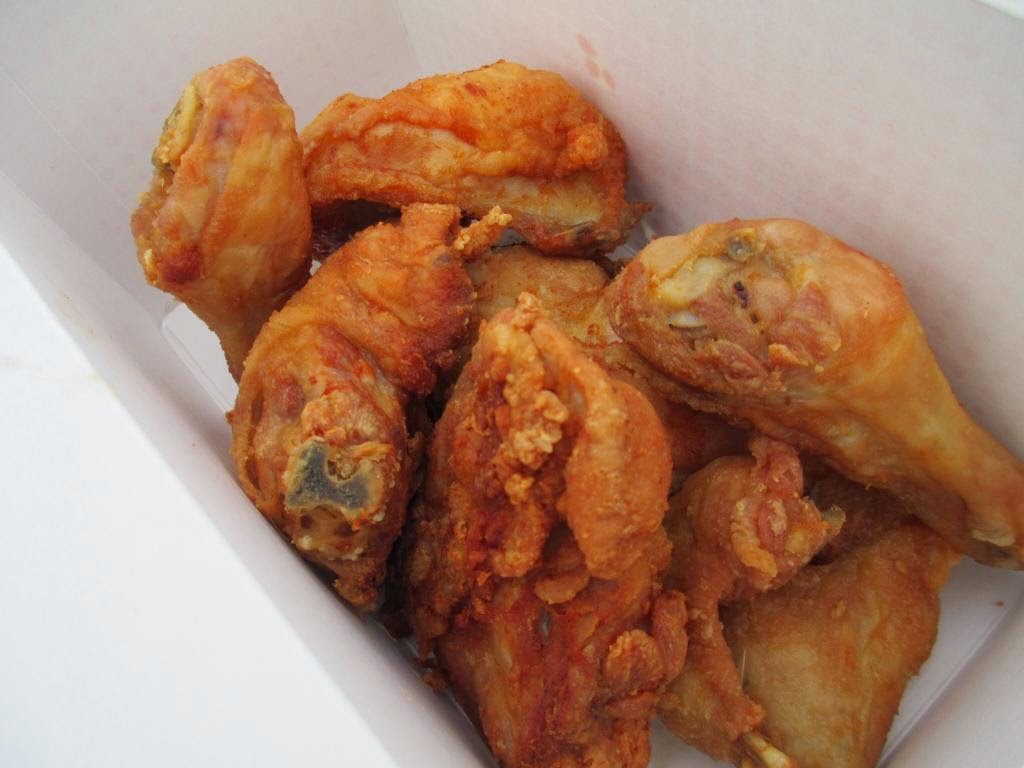 Late one night before hitting the hay we rolled into a place known for their fried seafood and pastries. The Grub Seeker had scouted out this one and these were his words. "Always on the lookout for fried shrimp a visit to Mary's Seafood and Pastries was in the cards: Some good shrimps and a really great piece of caramel cake that lasted me 2 days - anyone who can remember the Sanders Caramel cakes from the Detroit area from back in the day, this is it - sorry no pic". Agreed, the shrimps were really good. Different breading than we're used to here in Chicagoland. 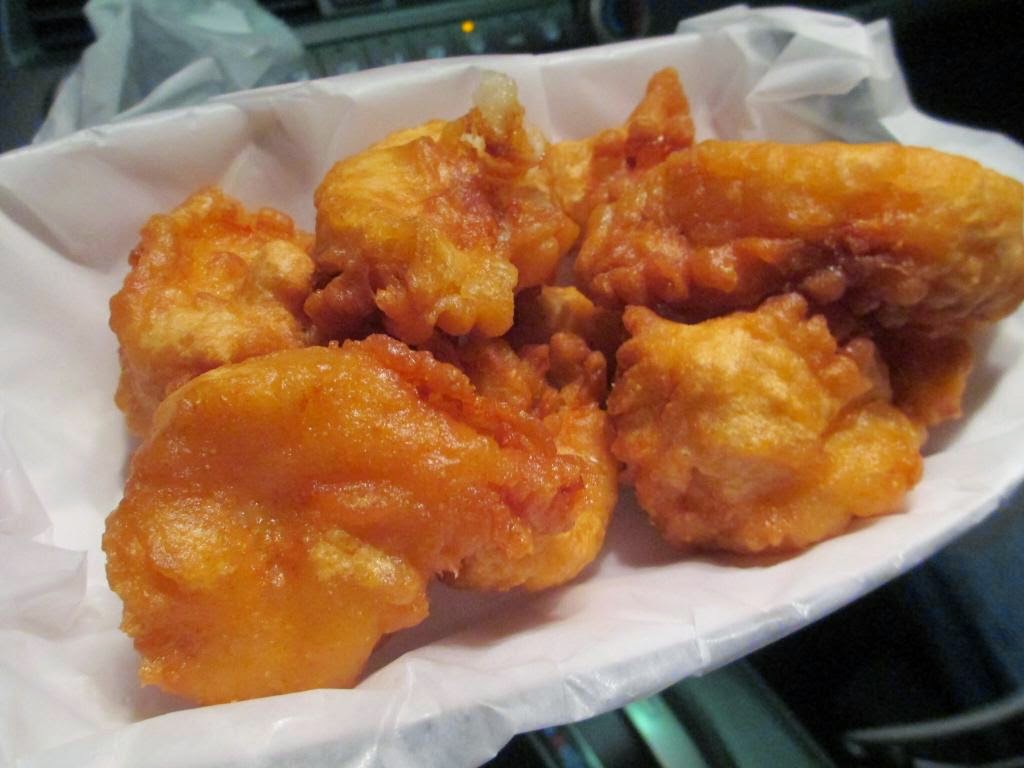 Last but not least is another shout out to Goose the Market which makes some of the best sandwiches I've come across in my travels. You can read more about them and some other worthwhile Indianapolis dining spots in part one of this series by clicking this link HERE. 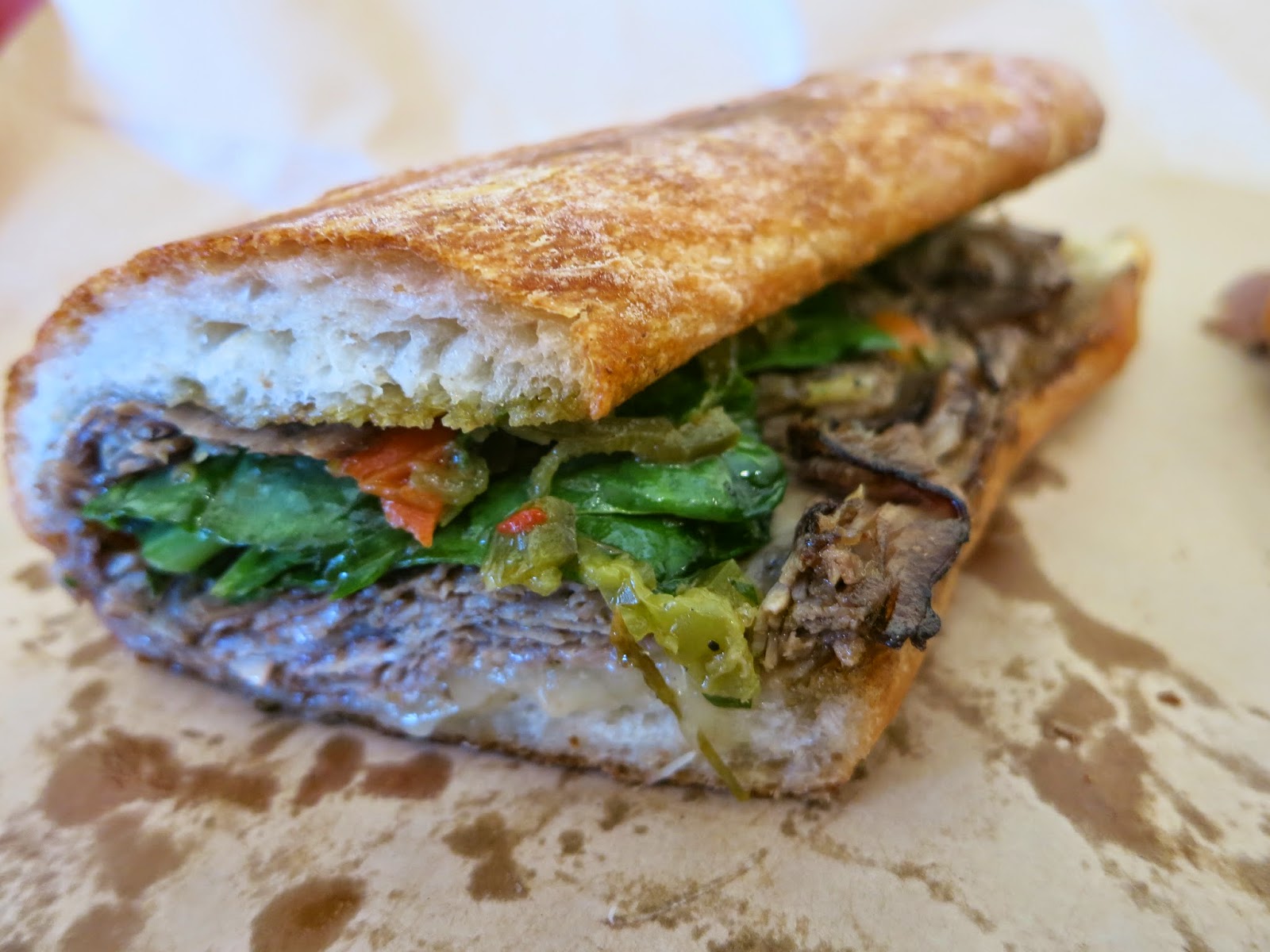