Eating like a local:
Regional food specialties
- Local Eats in the Queen City

I spent the Fourth of July weekend down in Louisville and we decided to head over to that Saturday. I've never so much as to even passed thru the Queen City so it was something I really wanted to do. Only about an hour and 20 minute drive from Louisville it made for a great daytrip as we spent the afternoon wandering around the up and coming OTR (Over the Rhine) neighborhood. If you've ever wondered what the gentrification process of a neighborhood is all about then get over ASAP as you can watch it happening live before your eyes. Look no further than this picture below of a family taking a carriage ride past a burnt out loan shop. 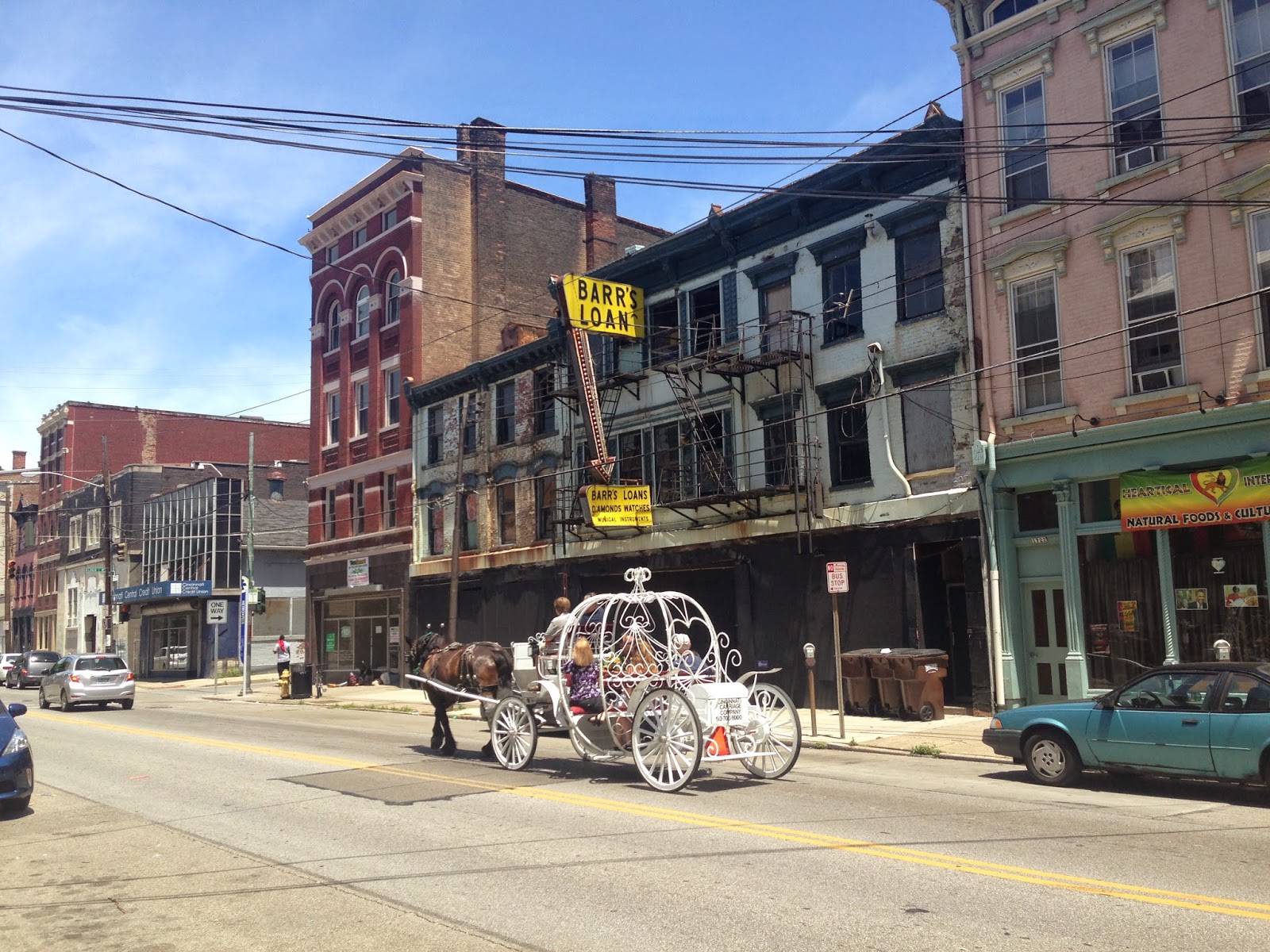 Our first stop of the day was for some goetta. What's that you ask? It's a popular breakfast item eaten in these parts. It's made with pork sausage that's binded together with pin-head oats and spiced with seasoning. This popular German-American breakfast snack is found all over Cincinnati. I had my eyes set on Tucker's Restaurant in OTR. I'd originally read about this Cincy classic over at Roadfood where they give deep praise to both the goetta and also their hash browns which many say are the best in the business. I'd be the decider of that. 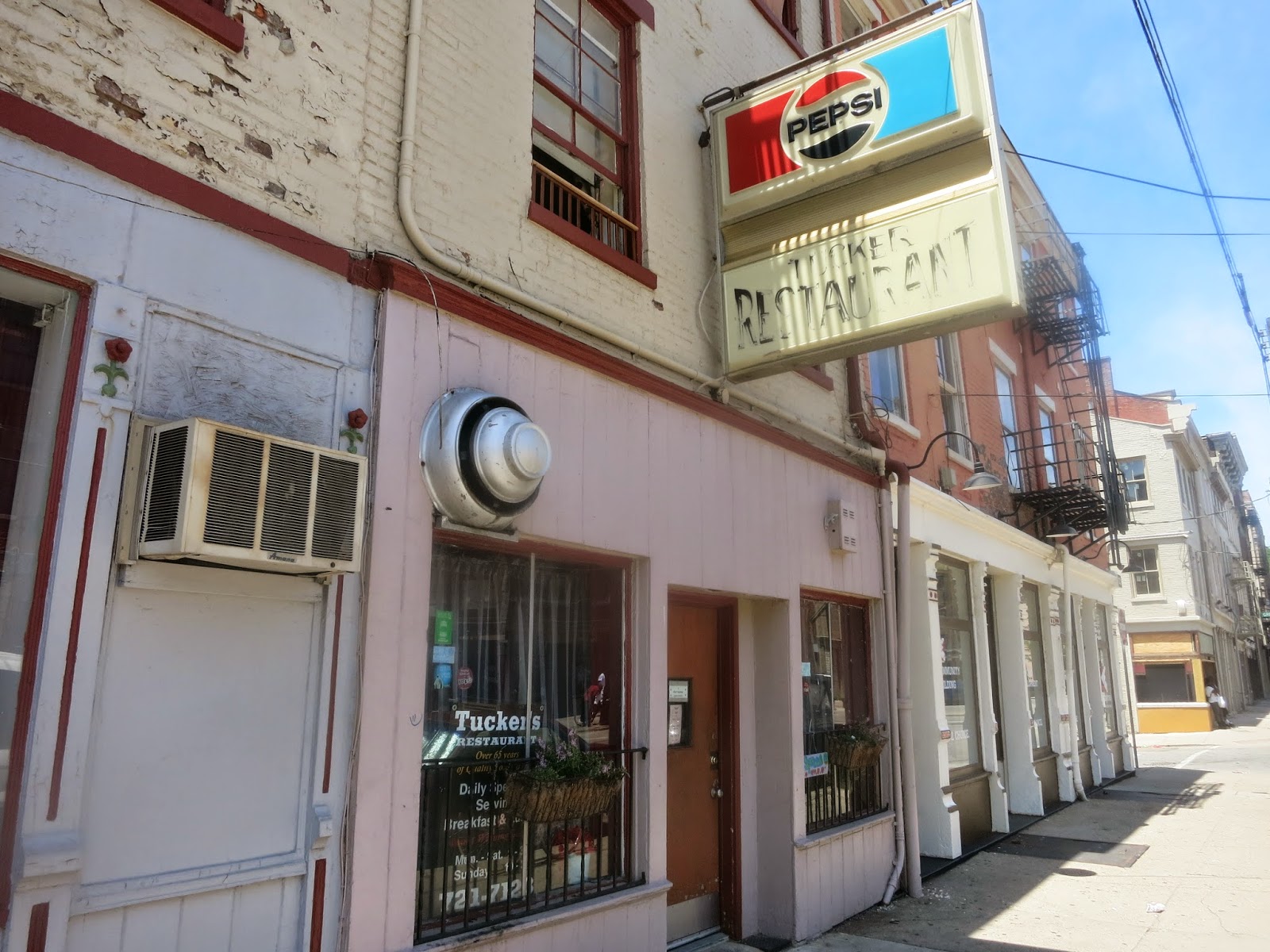 Tucker's is a no-frills type of place with a counter to one side and booths to the other. On this particular visit the clientele was very wide-spread. From brothers to bros and everything in between. I like spots like these. I decided to go with the breakfast plate and upgraded my hash browns to the deluxe variety. Phenomenal! Best breakfast I've had in some time, granted I'm not a big morning eater this was something I'd be in for often if I lived in the vicinity. The potatoes get topped with fresh mushrooms, basil and tomatoes from the market nearby and the goetta was similar to corned beef hash which is my favorite breakfast bite. As the Stern's at Roadfood said, it's worth the drive. 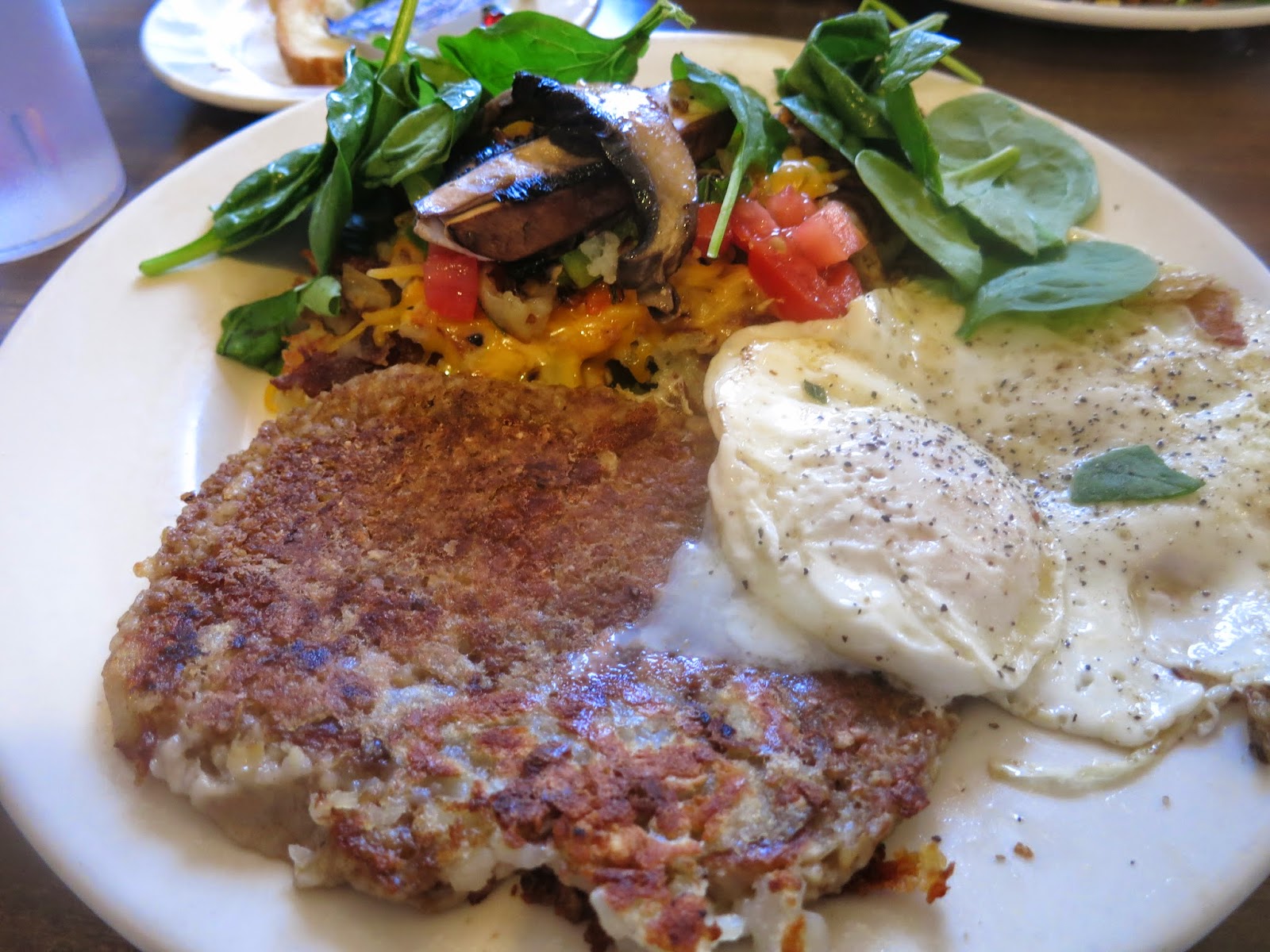 Also on Vine street not to far from Tucker's is Holtman's Donut Shop. From the outside I assumed this place was a newly opened shop in wake of the craze for them but I was happy to see that they've been around since 1960 and have three locations here. I stopped in for a couple and came out with a wonderful chocolate frosted bite as well as a game-changing maple bacon peanut butter concoction. Good stuff and I feel important to point out there was no $3/each asking price. 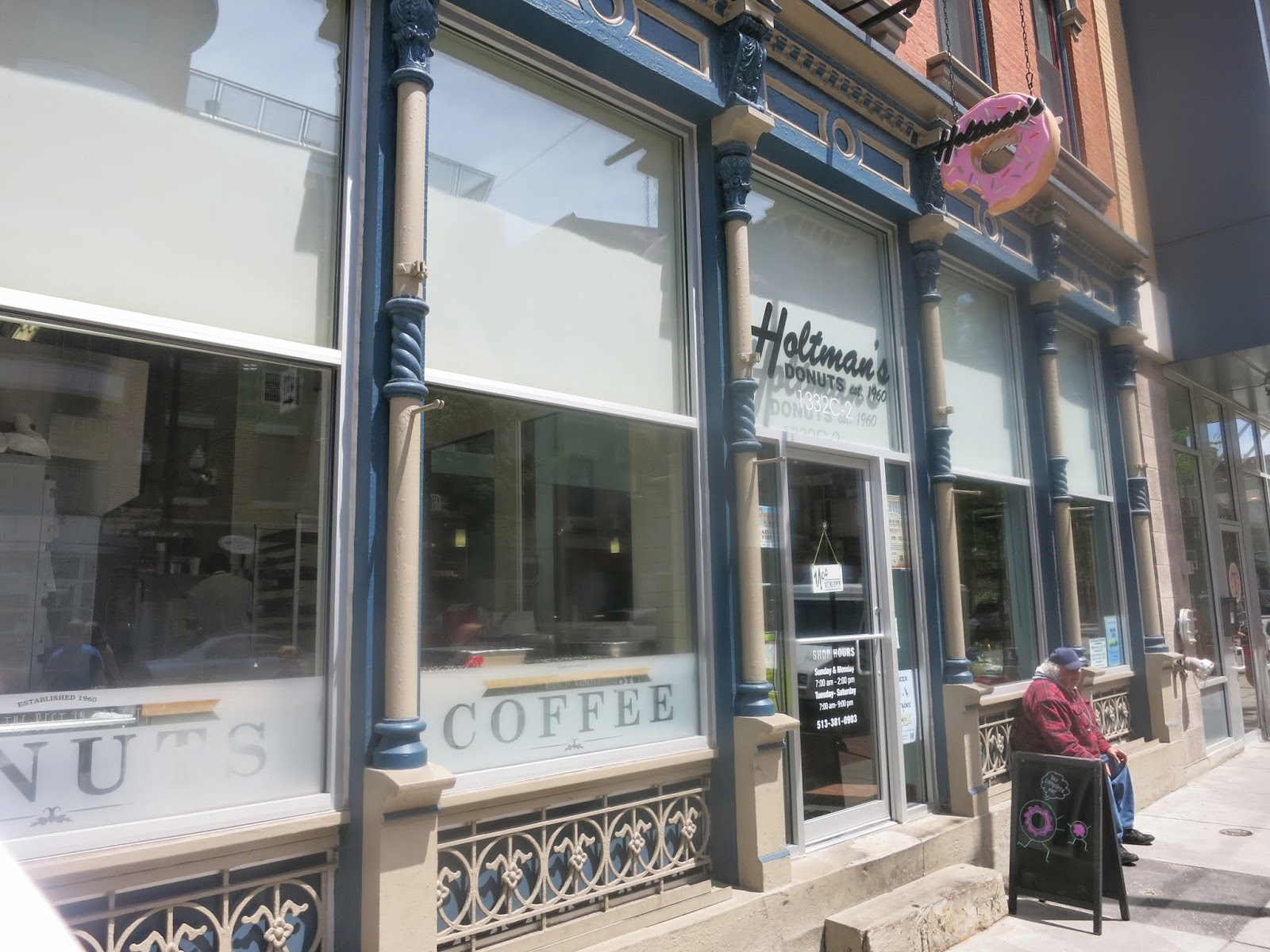 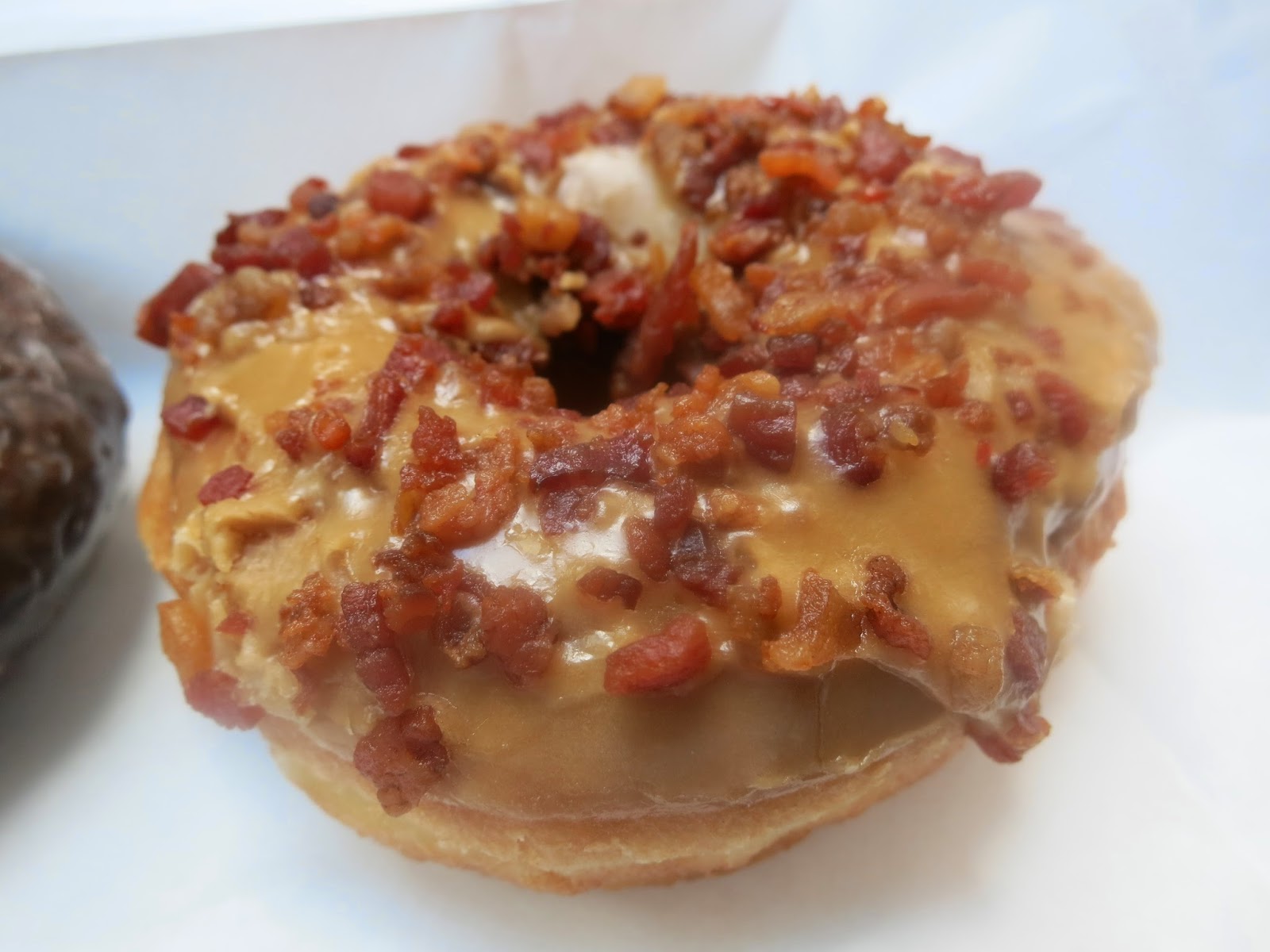 Feeling full from a double dip breakfast we walked on over to the famous Findlay Market. This is "Ohio's oldest continuously operated public market  and one of Cincinnati's most cherished institutions. The Market is located just blocks from downtown in Over-the-Rhine, a dense historic neighborhood rich in 19th century architecture." I thought it was very similar to the Eastern Market in Detroit. Not quite up to par with the Reading Terminal out in Philadelphia but still something most any city would be happy to have. I tried my first mettwurst which is a type of smoked sausage with cheese that's another popular regional eat in these parts. 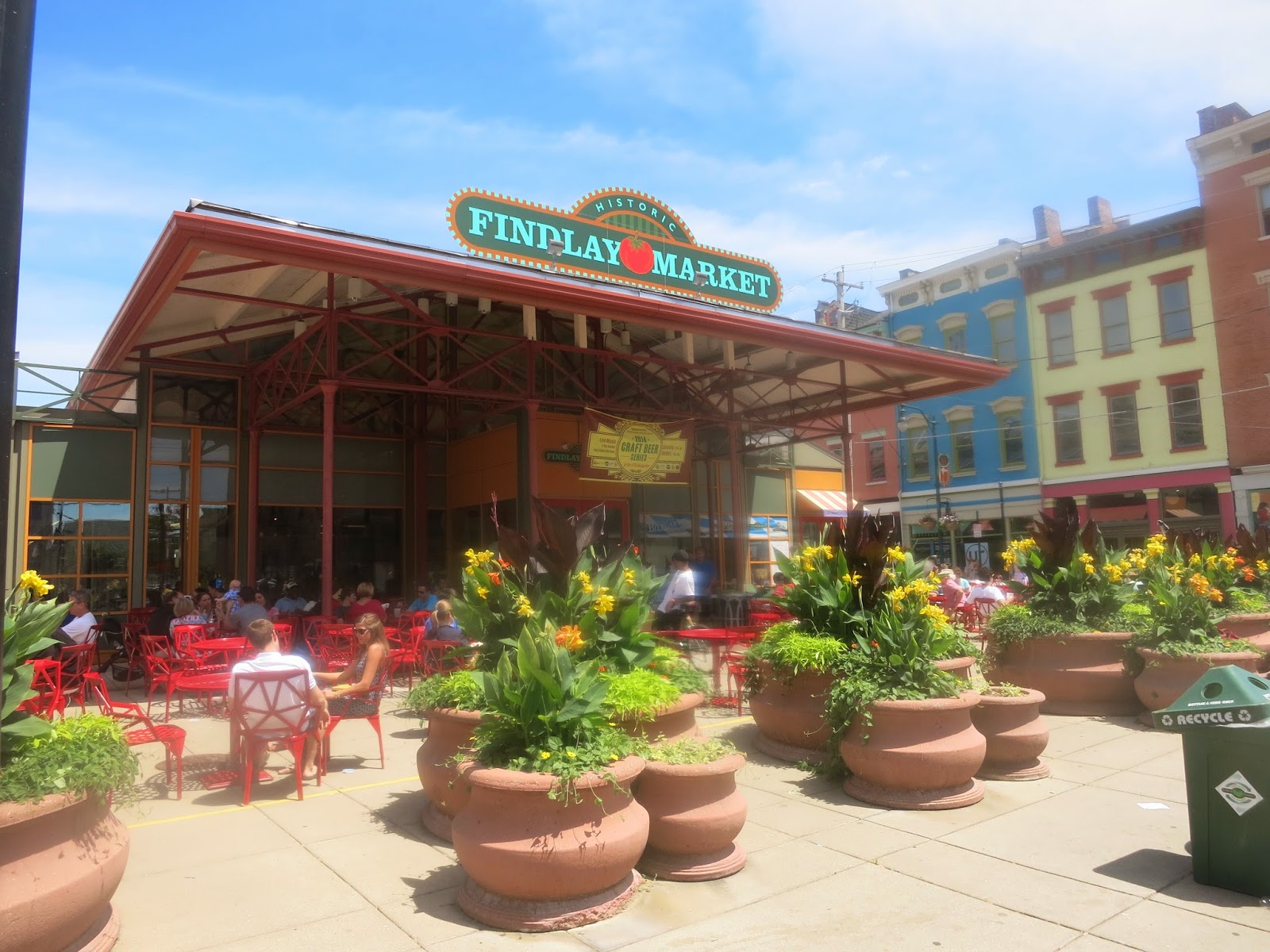 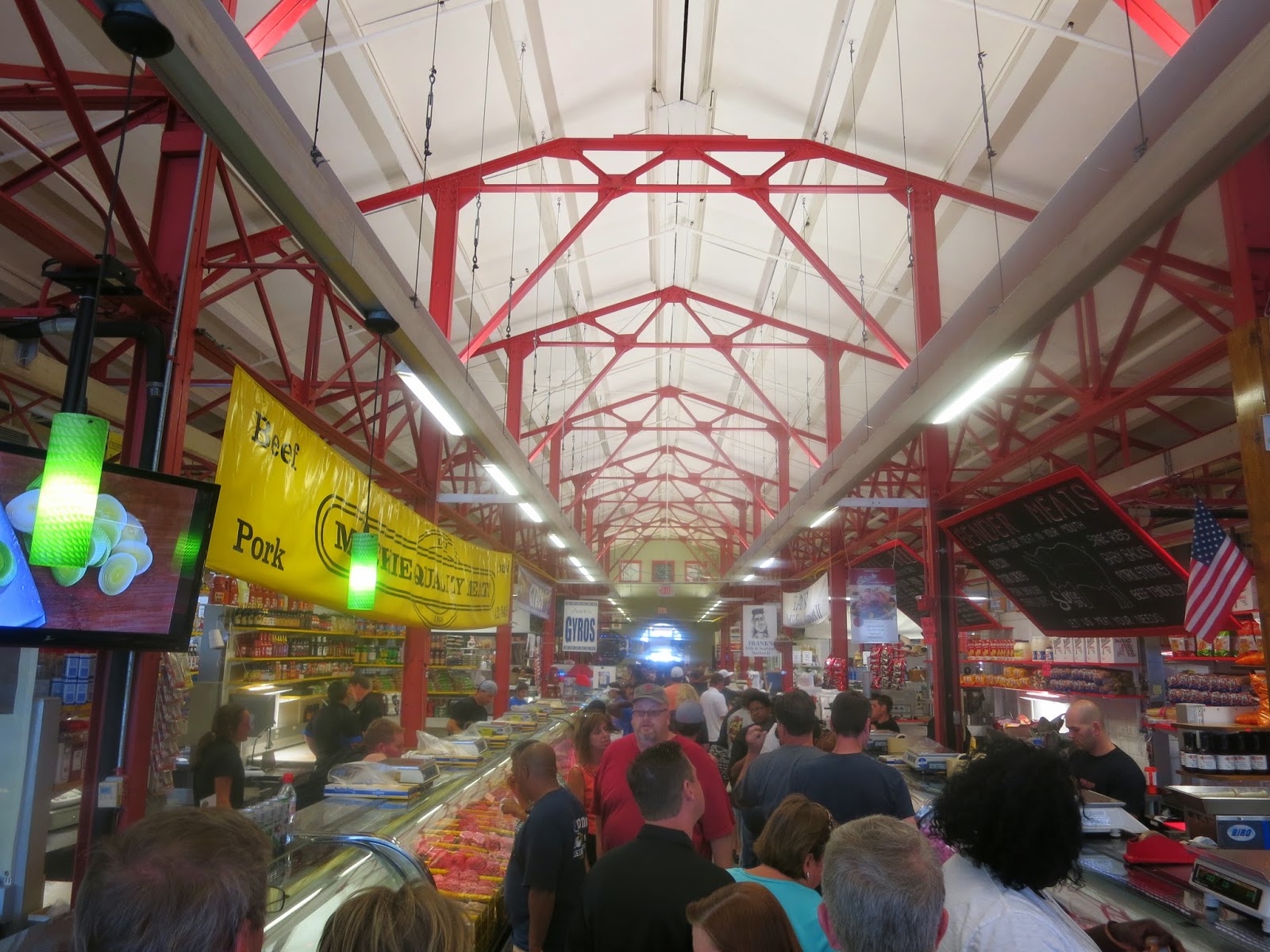 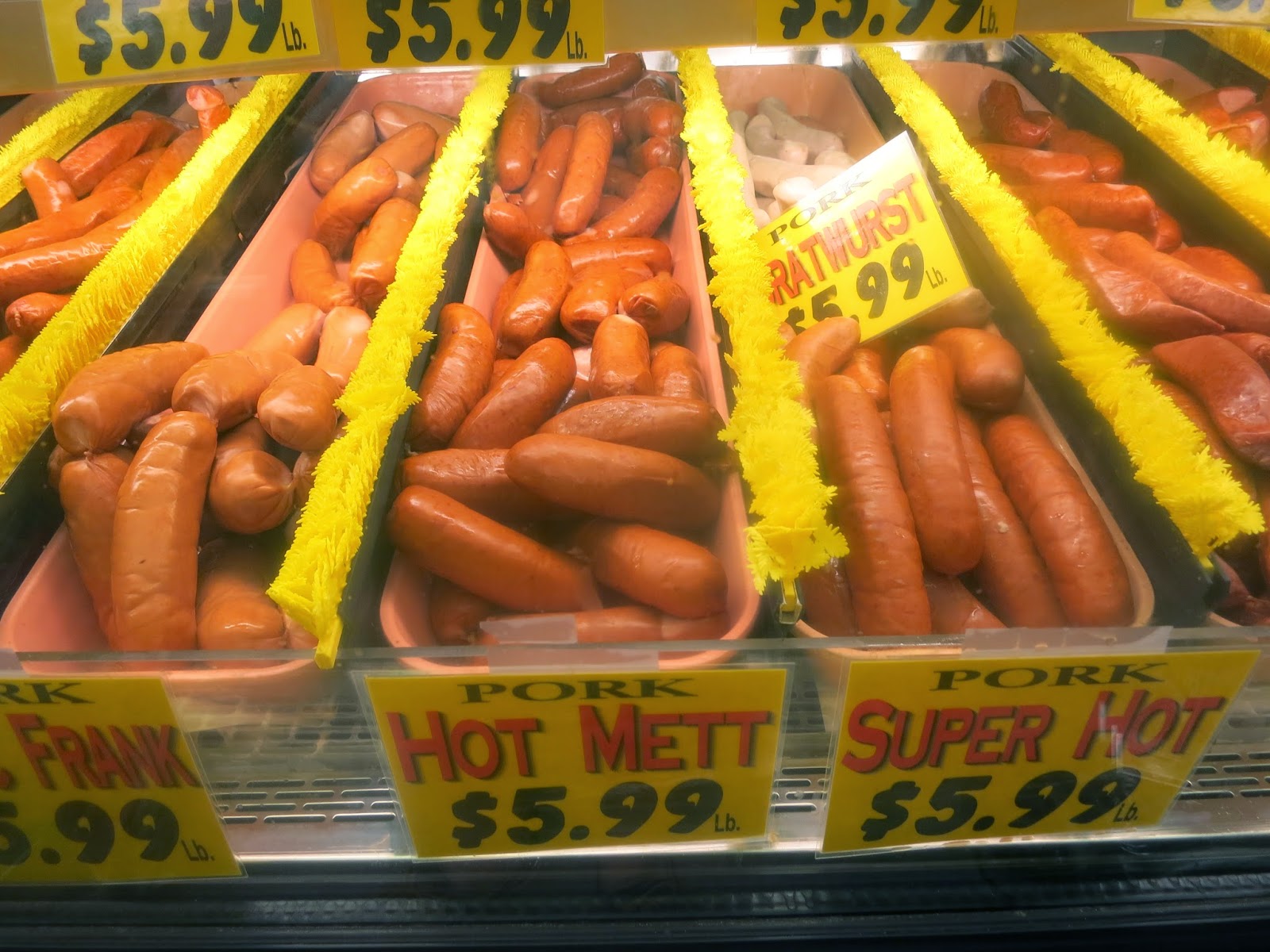 Thirsty for something boozy we headed over to a popular place called Bakersfield OTR. It doubles as a taqueria and tequila sipping spot and like many of these modern taquerias throughout the country, they get packed. Many of the trendier spots in OTR close around 2 or 3p and then reopen at 5 or 6 but Bakersfield is open all day. The drinks were good but the tacos were even better. As good a trio as I've had at these modern taco bars that are taking our nation by storm. Both the fish and cochinita pibil were above average while the short rib was outstanding. I left impressed. 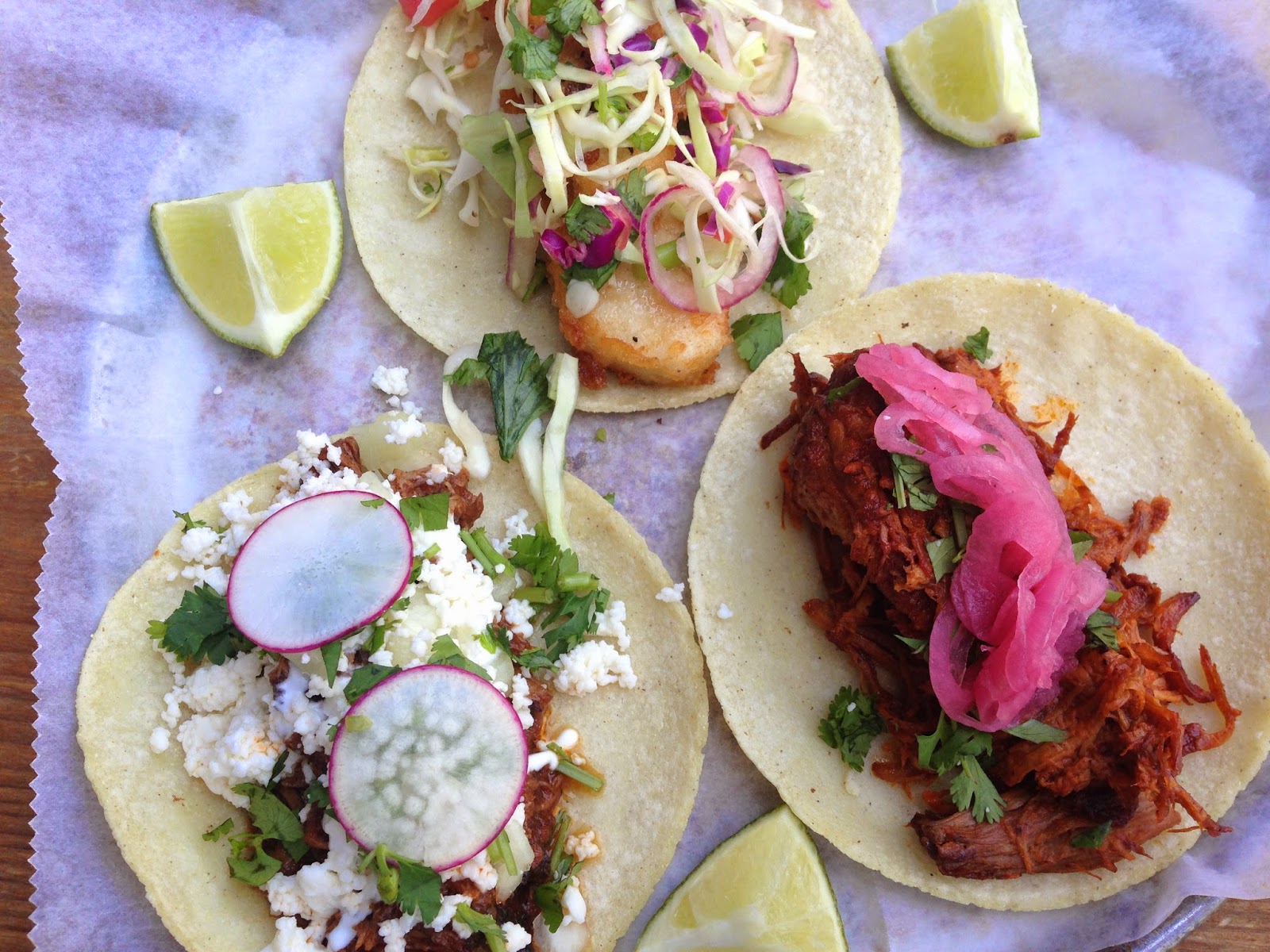 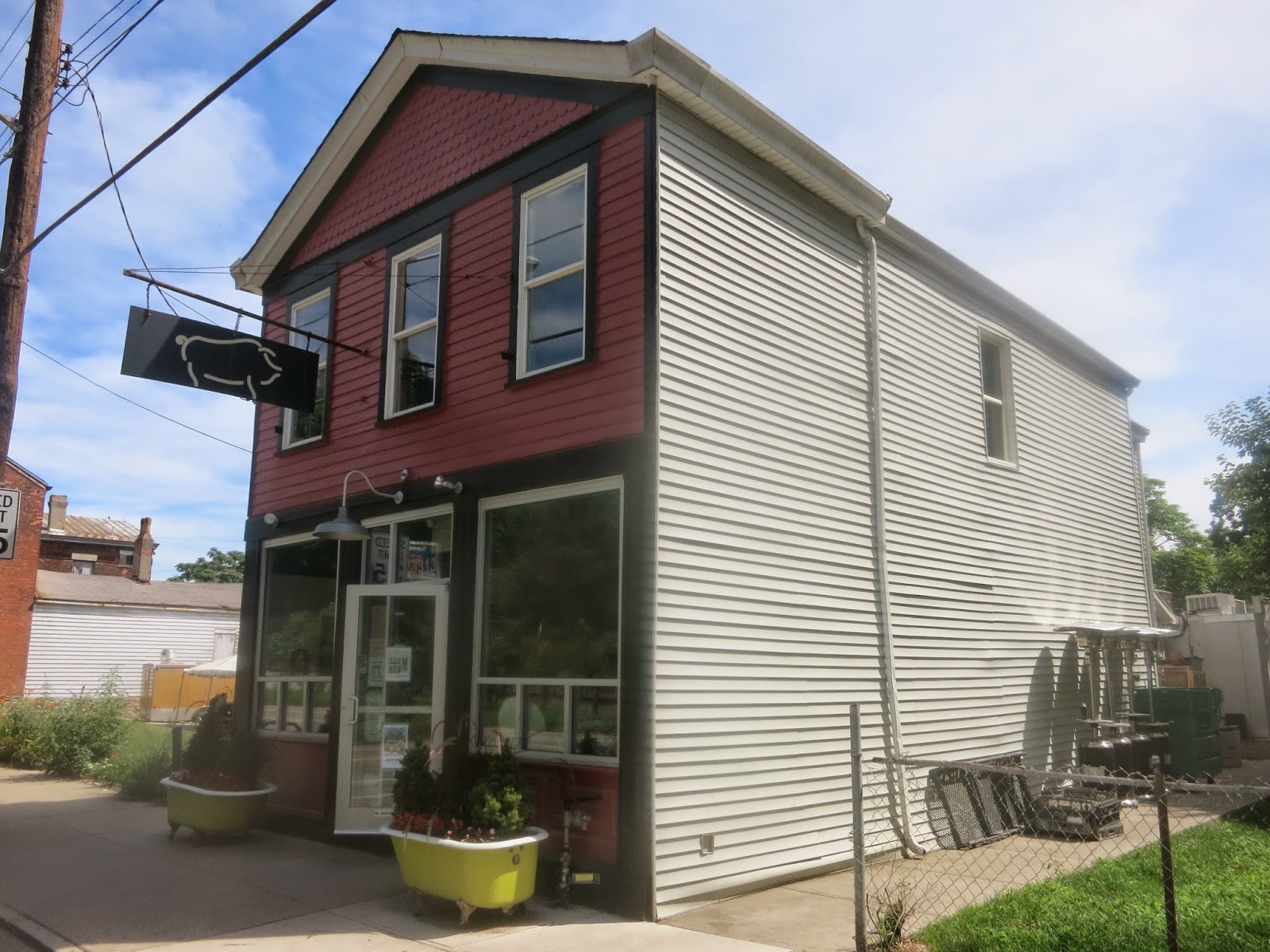 A popular spot down by the river

The last food stop before heading back to Louisville was a place an old friend suggested we meet at. Eli's BBQ started off catering but became so popular that they moved into a brick and mortar. The line was reaching out the door on my visit but it moved fast. They have a huge outdoor dining area with large tents hovering over tables in the lot next door. You can eat inside if there's a table available. 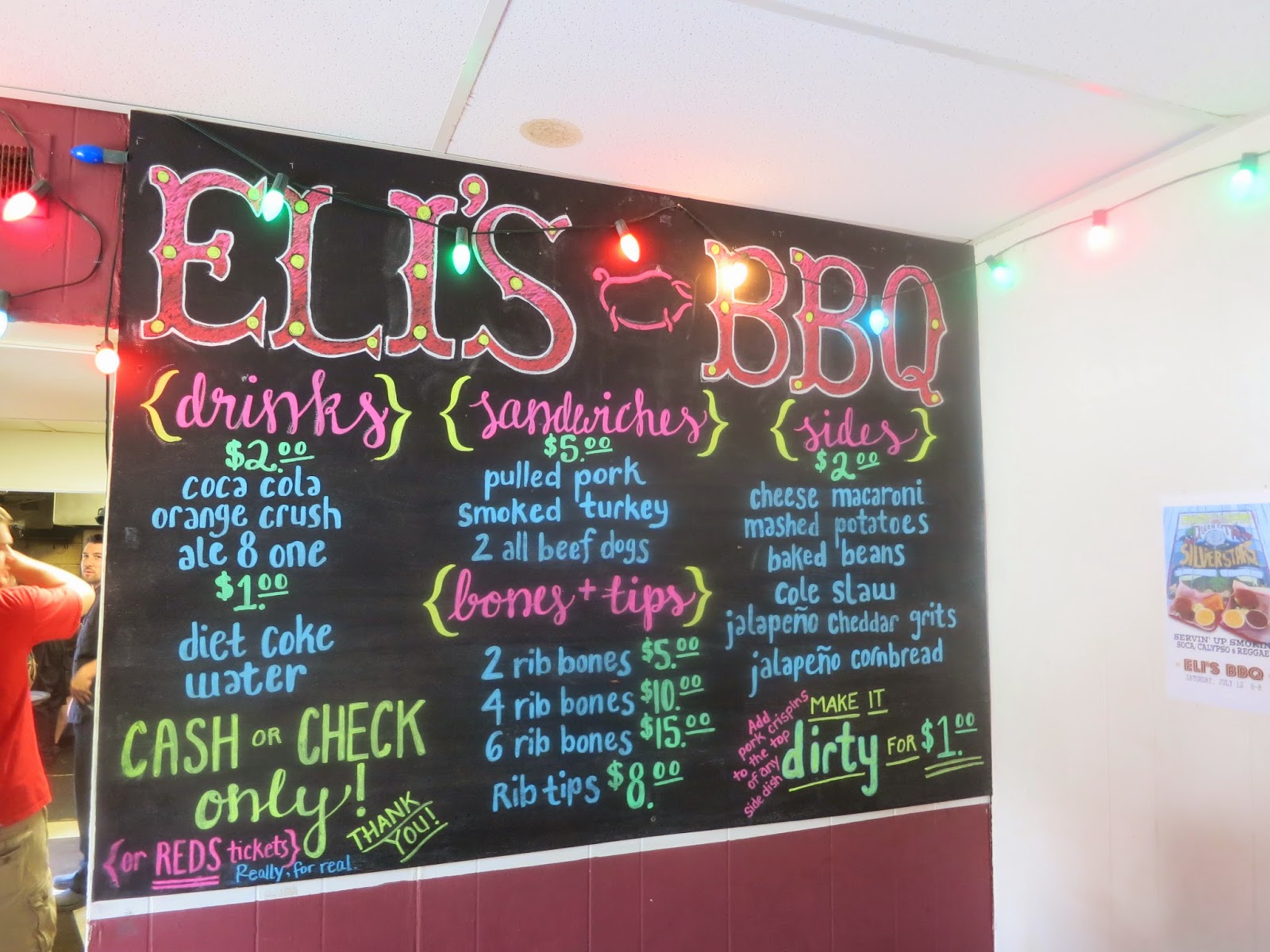 Menu at the Register

I'd heard the pulled pork sandwich was where it's at so of course I chose to roll with that. Great deal as $8 nets you a sandwich overstuffed with meat and two large sides of your choice. The pork was sensational. I usually stray away from this at spots as I can make a pretty good version myself but this was wonderful bite and the sides were just as good, really enjoyed the cheesy jalapeno grits and thought they should of added a cheesy in front of the mac and cheese on the menu too. No doubt the kids love that version. I'd happily go back here as the line moved really quick and the food lived up to the hype. Looking forward to a return trip to Cincy soon, I really liked what I got out of it on this short daytrip. Unfortunately I decided I didn't want to add on the 40 minutes of driving time it would of took to go to Jungle Jim's and immediately regretted that on the ride back. 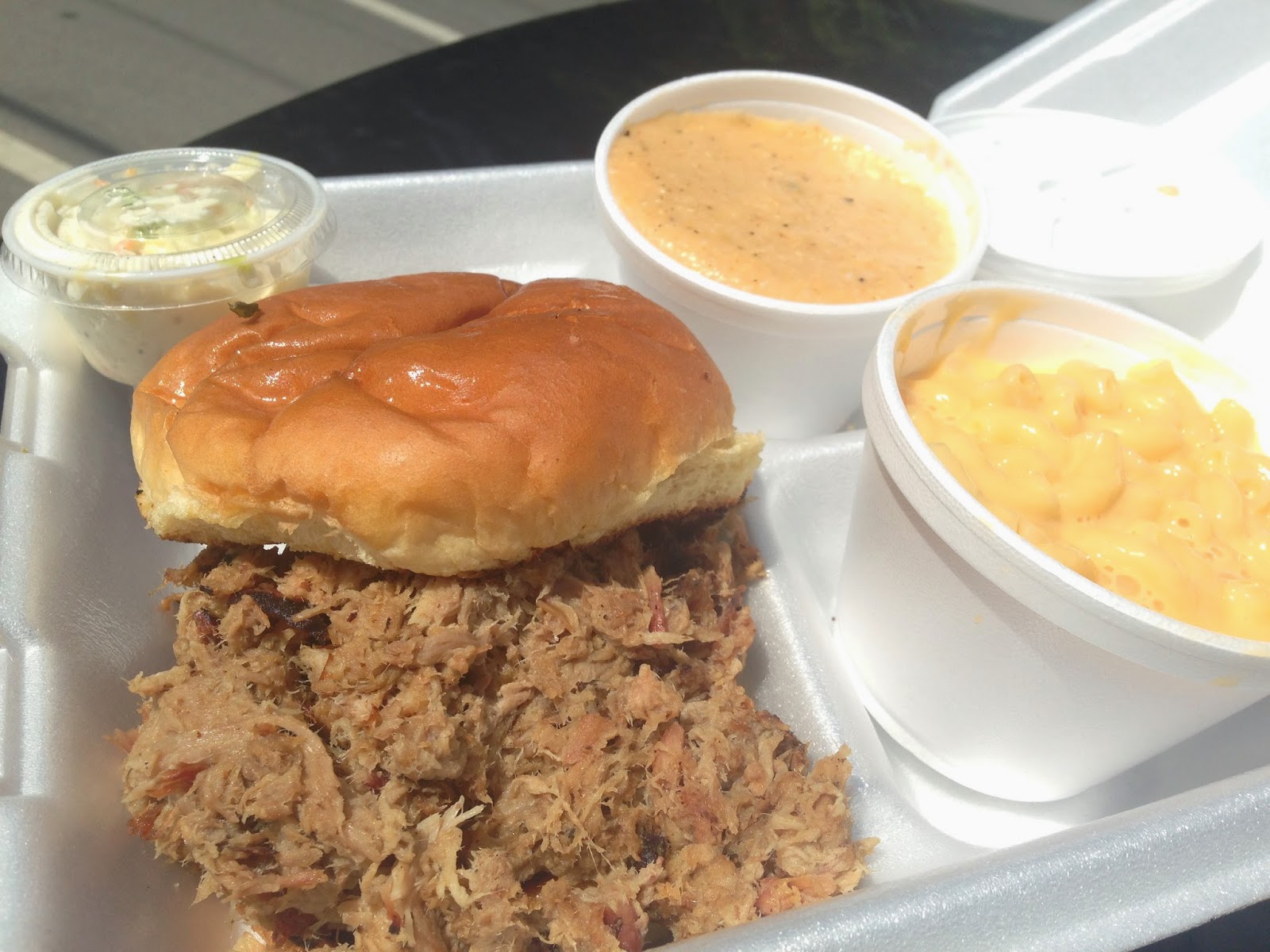 Start following our signals NOW & gain up to 270% daily.