-Grubbing in Chicago
Where to find Potstickers

Even though we said we wouldn't be back until March I have a special post to kick off both Year #14 of the site and also Chinese New Year which falls on Friday February 12th this year. There's quite a few traditional foods that are ate during the Chinese New Year. Each one having their own symbolic meaning. One of the most customary dishes enjoyed during this time of celebration are dumplings. So the legend goes the more dumplings you eat during this time the more wealth you will gather in the coming new year. If you were to ask me what the Chicago food scene is lacking in - dumplings would've been my answer a few years back. We have some damn good Chinese food in town but not enough spots focusing solely on dumplings. That said there's been quite a few new openings in the last few years. Soon we'll no longer be able to count the number of dumpling specialists on one hand. Today's post will focus in on some of the best places to get potstickers - pan fried dumplings.
_______________________________________________ 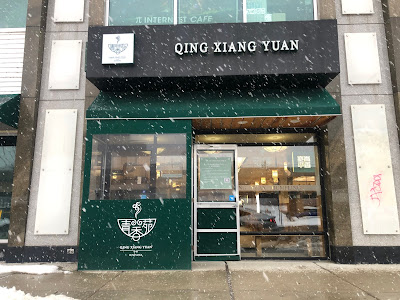 Qing Xiang Yuan
Search "best dumplings in Chicago" and this place will appear near the top and often after that. Qing Xiang Yuan, or QXY if your Chinese isn't great, might have been the city's first dumpling specialist. They opened around 2015 as a small stall in the Richland Center's food court basement. They got so big that they eventually moved upstairs in the building and are now one of Chinatowns most popular spots. They added the option to get their dumplings pan fried when they moved into their new digs. You have some really good choices when it comes to fillings. I like the classic of pork and cabbage the most as far as potsticker fillings go but dont sleep on the lamb or beef with cumin from here. They also run a spot called Jiao on Wabash downtown about a half mile walk from The Bean. 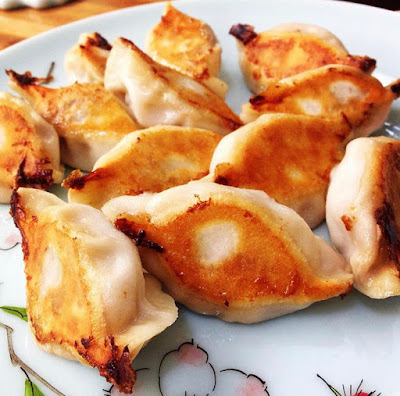 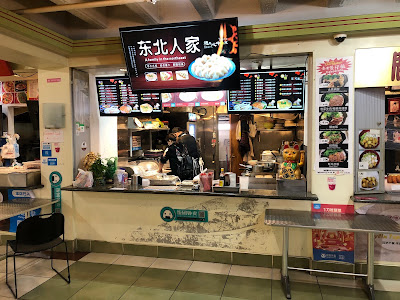 A Family in the Northeast
Speaking of the Richland Center basement there's a new stall selling open ended potstickers called “A family in the Northeast." This stall has hosted a few places over the years with this newest tenant specializing in open ended potstickers, bing, and bao. They offer a handful of fillings and the traditional pork and leek were pretty good. Some people arent fans of the open ended wrap bc of the juices from inside that they can lose. That said these were still pretty juicy but suffered slightly from a packaged trip from the mall to my car. They steamed a bit and lost some of that would be crunch. 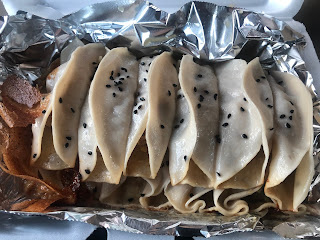 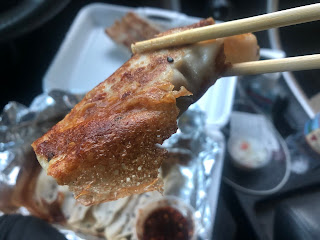 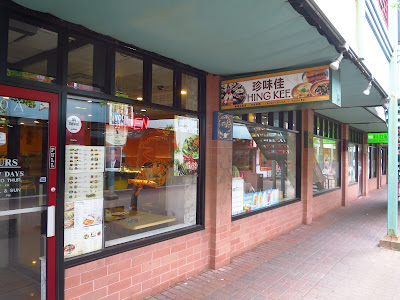 Hing Kee
Hing Kee is located in the Square. They get your attention by putting the dumpling ladies in the front window. From there they pretty much roll and fold dumplings all day. Lot's of people like their Xiao Long Bao aka soup dumplings but they have other styles on offer. An order of potstickers from here will always come out nice and crisp. It's one of the better spots in Chinatown to enjoy dumplings. 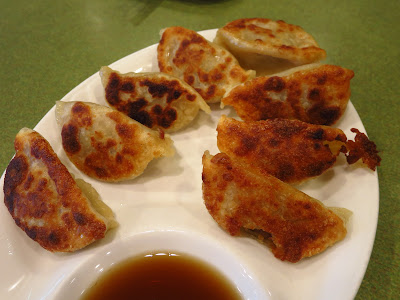 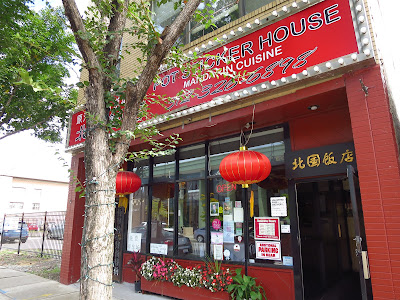 Ed's Potsticker House
Any time a place puts potstickers in it's name it's getting a visit from me. That said for whatever reason it took me a long time to try this place in Bridgeport out. Probably due to mixed reviews. Ed's makes cigar style potstickers and for that reason alone they're worth visiting. These dumplings are long and thin and come filled with a traditional pork and chive filling. I believe these are a Beijing thing as I visited a very famous spot there that does this style which they call dalian huoshao. 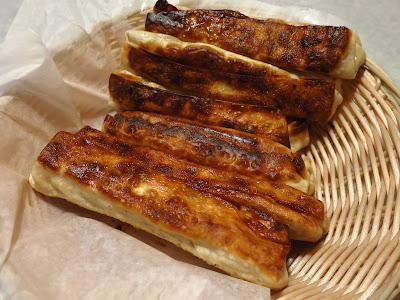 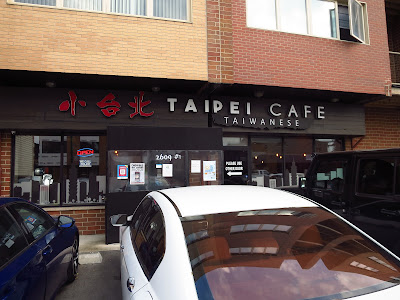 Taipei Cafe
Taipei Cafe sits in a strip mall on Halsted in Bridgeport. The neighborhood that's home to the White Sox is quickly becoming home to more and more Chinese restaurants up and down the block. As you might expect from the name the food from Taiwan is on feature here. There's some good dishes to be found up and down the menu with the potstickers being one of them. Their stuffed with pork in a small rectangle shape before being cooked in a pan which gives each order a half circle of crispy lattice coating. This is achieved by adding something like corn starch to the water used to cook them. As the water evaporates the starch turns into a brittle webbing that crisps up on the edging of them. 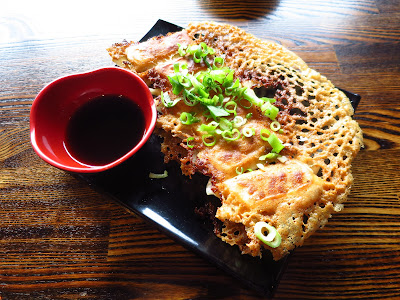 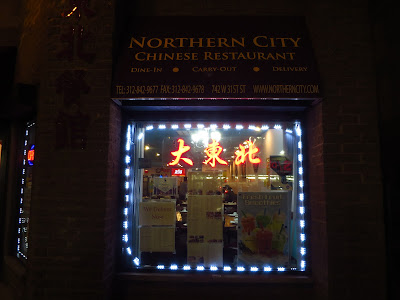 Northern City
This place has been one of the Bridgeport Chinatown anchors for a while now. I'm not saying they were the first spot on the block but they've been there since this area around Halsted started to host a majority of businesses which are Chinese restaurants. As the name suggests they make lots of dishes enjoyed in Northern China. The aforementioned dalian huoshao are really good here. They're called "beef potstickers" on the menu and they're well seasoned with a nice golden hue from the pan frying. 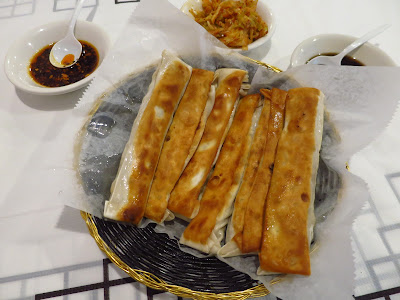 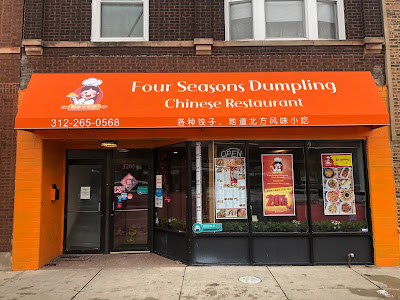 Four Seasons Dumplings
The city's newest dumpling shop sits on Halsted in Bridgeport across from the police station parking lot. I'd read that the people that opened Four Seasons Dumplings are some former employees of Ed's Potsticker House down the block. Aside from the dumplings in their name they also specialize in house made lo mein which is pretty good if you like subtle flavors paired with chewy noodles (try the green bean version). But don't miss out on the dumplings which potsticker wise are probably my favorite in town right now. I haven't tried the steamed options bc I think those would be much better dining in but the style of fried dumpling they do here aren't the type to get all stuck together when taken to go. They say they're handmade and the wrapping is a bit on the thick side but it has good bite and the fillings include juice. I've only tried the pork and cabbage but I've tried them three times now as I've been in  area fairly regularly. Pay with cash and all orders are 20% off (grand opening special) from now until end of March. Extra points for really good chile oil packed to-go with these. 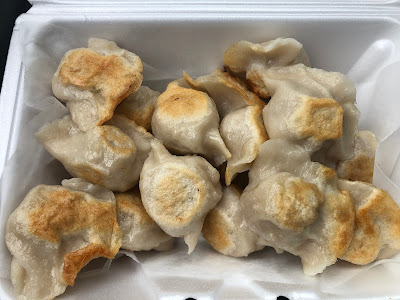 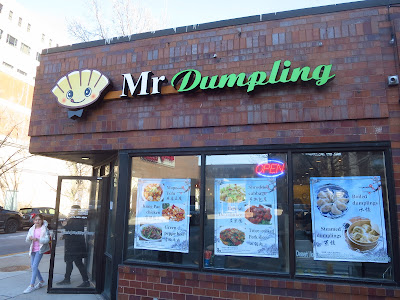 Mr. Dumpling
Lincoln Park continues to be a spot that sees some interesting Chinese restaurant openings. One of the more recent is Mr. Dumpling on Clark. While the menu boasts a selection of both traditional and American Chinese entrees the namesake dumplings are what brought me in. They offer a nice selection of fillings and you can try them steamed or pan fried. They're on the smaller side being two bites at most but they're tasty and would serve me well if just out of college and living in the area. 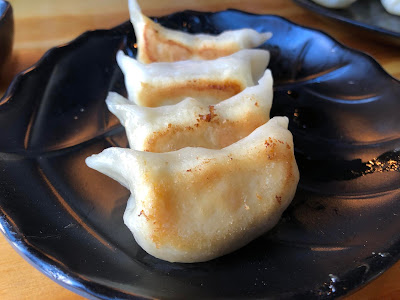 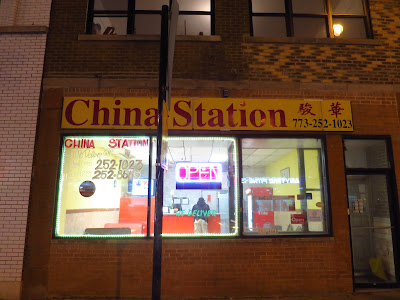 New China Station
As regular followers of my food endeavors know this is one of my most visited spots in the city. I always order the same thing these days which is their outstanding (though semi inconsistent) dry chili fish filet. It's very likely my most ordered dish in all of Chicago. Partly bc it's delicious chunks of spicy fried fish which pairs perfectly with white rice and partly bc it's only a 5 min drive from my house to it's North avenue location. It wouldn't be as good ordered delivery bc it suffers the longer it sits and steams. That said it's still really good and if you want to enjoy an appetizer I rec the potstickers. They make the thick and chewy ones associated with the old school American style Chinese restaurants of my youth. They're full of juicy pork with garlic and ginger and are an excellent example of that style. 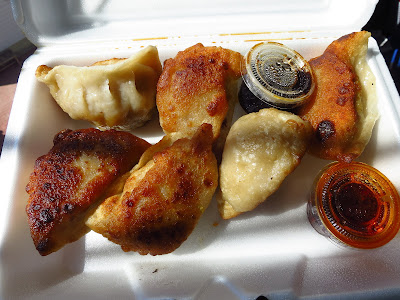 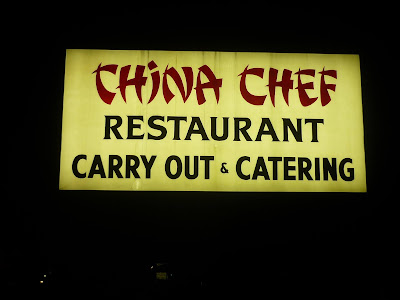 China Chef (Morton Grove)
China Chef in Morton Grove is a destination for many Filipino families from around both the city and North Suburbs. It's a Filipino owned Chinese restaurant so items like pancit guisado are as popular as stuff like Mongolian beef and such. I wrote them up on here years ago. As I said then the pork filled potstickers here are a bit different in the way they wrap them. The skin on these is thinner than you'd normally get at a Chinese restaurant. I always enjoy these flute shaped dumplings bc of that. 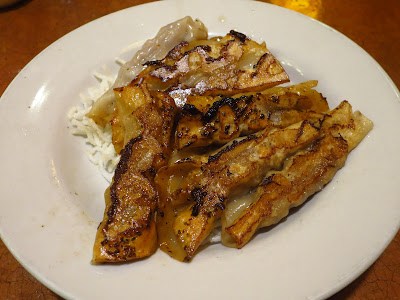 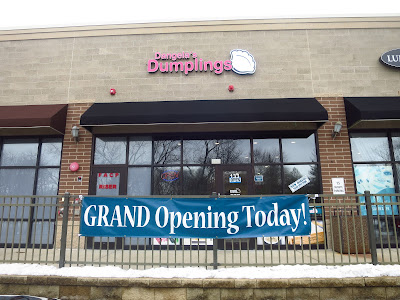 Dangela's Dumplings (Libertyville)
Our final stop takes us all the way out to Lake County. As the name suggests this is a dumpling house. Meaning that's pretty much all they do. Dangela being a middle aged Chinese lady who lives in the area and opened this spiffy clean ready for franchising restaurant towards the end of 2019. I visited around the start of 2020. I haven't been back but enjoyed my visit to this straight forward shop. Not just the menu which consists of both steamed and fried dumplings but also the friendly owner. We asked if she considered opening around Chinatown and she told us she had no interest dealing with constant critique from locals. They offer a handful of fillings that tell you the "exact" portioning of each filler (ex. Pork and Celery - 80% Pork, 20% Celery). We tried the shrimp (45%), Sweet Corn (40%), and Chinese Chives (15%) in boiled form and they were legit. I liked the fried pork and celery version even more as she ordered a couple machines from Asia specifically made for cooking dumplings. They're rectangular in shape so you can put in ten dumplings per machine then add water with starch and close the lid until they're cooked. They make them with the lattice laced edges here which isnt something you regularly find in the Chicago area. 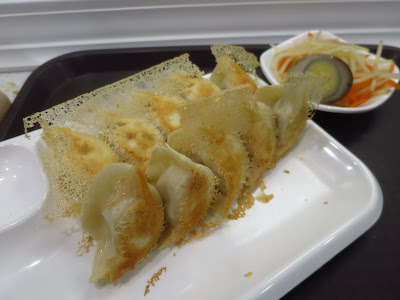