We did a daytrip to Biloxi on the drive back to Chicago last year, which we did through Alabama, as you can see HERE. It’s an hour west of Mobile so we headed out early one morning with plans to indulge in some local eats while catching a Biloxi Shuckers minor league baseball game. Biloxi we once the “seafood capital of the world” and it’s still a big business there but the casinos have taken over as the areas biggest draw, both from an local employers standpoint and also from a visitors angle. Most people visiting are there for some gambling. But not us. We were there to eat (crawfish) as its location along the Gulf of Mexico just 1.5 hours from New Orleans means you’ll find plenty of local options. Local as in lots of seafood mixed with plenty of influence from it’s Gulf coast location. 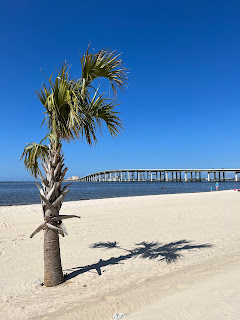 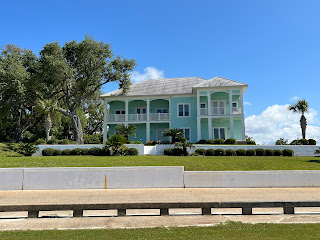 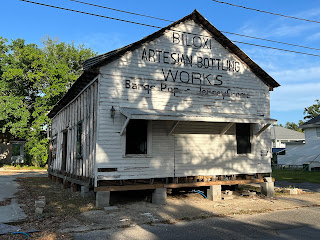 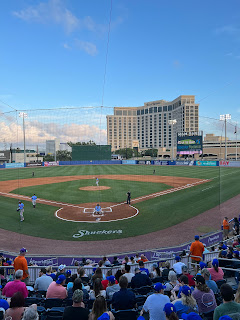 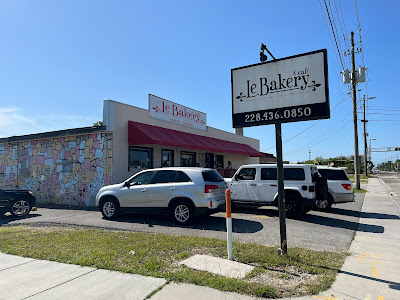 Our first stop up was a Vietnamese bakery known for excellent pastries and a top notch Bahn Mi. The story of Le Bakery is one that begins in Vietnam during U.S occupation. Le Nguyen, the owners mother, was twenty-seven in 1975, when the American forces finally pulled out of Vietnam. She was given passage on a military boat to Philippines, where the US had a naval base. Eventually she landed in San Diego, where her daughter Sue was born. After settling in Southern California and re-marrying they opened a restaurant before taking a trip to Mississippi one summer. They fell in love with both the climate (which was similar to Vietnam) and also the local Vietnamese community who was thriving in the local shrimping industry. They decided to stay in Biloxi and open up a small shop where they sold baked goods to the local Vietnamese community. It wasn’t until after Hurricane Katrina hit (their building was spared) that they converted their small bakery into a full fledged one that also had a cafe. It’s a no frills spot where locals will line up upon opening. They come for fresh baked treats, both savory and sweet, with options like Cajun meat pies sitting alongside the most amazing praline and pecan rolls. Extra crisp baguettes are baked fresh every morning and are the anchor for awesome Vietnamese po boy sandwiches which is what they call Bahn Mi's down here. 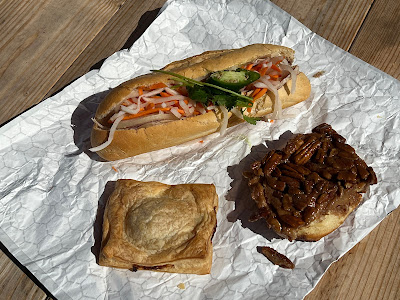 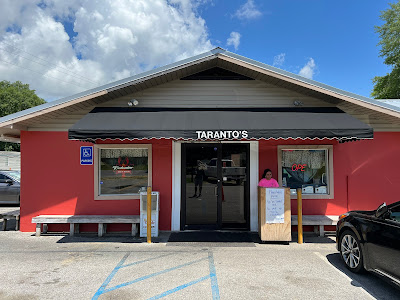 Seeing as how it was crawfish season this next stop was a must for us. Taranto’s is the name that will most always come up when discussion of Biloxi’s best crawfish boils is had. It’s also oozing with an old Gulf coast atmosphere and some friendly Southern hospitality. Locally caught and boiled Royal Red shrimps were as good if not better than the Crawfish which really hit the spot after not having any for a couple years due to the pandemic and what not. The gumbo was tasty too. But the surprise star of the show was the waitress recommended shrimp and crawfish bisque. Very cool spot. 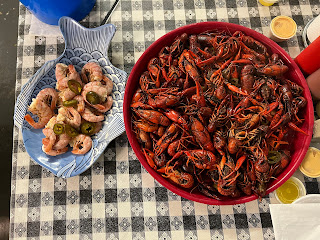 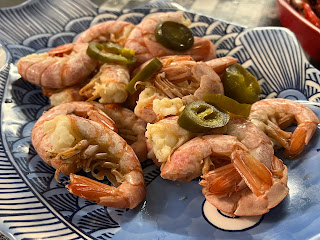 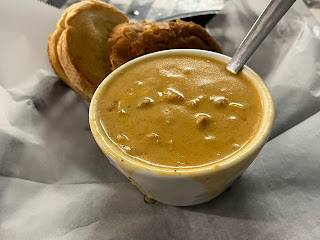 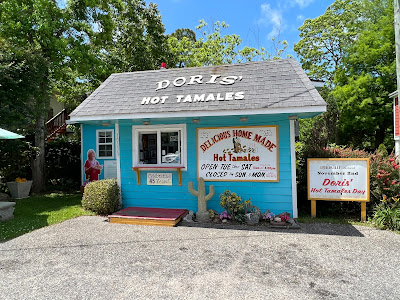 The last time I was in Mississippi before this was more than a decade ago when we took an epic roadtrip through the Delta. We ate tons of Delta style tamales on that trip and they’ve been one of my favorite regional foods ever since then, I’m always on the prowl for them when in an area they might be found. While just about anywhere in the state is fair game for them the majority of spots are found in the Delta. But there’s at least one spot to be found in Biloxi and it’s reminiscent of the tamale stands that we visited on that 2012 roadtrip to New Orleans. Doris’ Hot Tamales was celebrating their 45th year in business when we visited last April. Its namesake was such a beloved local figure that the city named November 2nd “Doris’ Hot Tamales Day”. She’s since passed away but her daughter and grandkids were very happy to hear we were visiting from Chicago as they were headed that way for a family trip later that summer (I gave them some good pizza recs). I think I got a half dozen hot tamales to start and then ended up with six more after putting down the first six. I’ve never had a bad hot tamale down here and Doris’ was no exception. Click the link to my report from the Delta circa 2012 if you want to learn more about this fantastic regional snack with African-American roots. 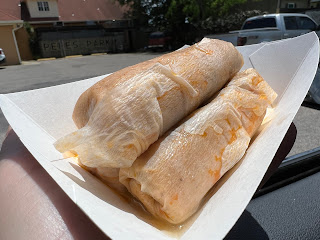 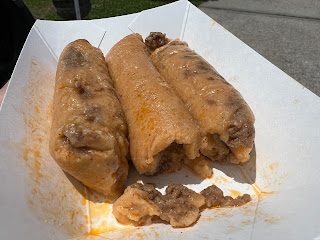 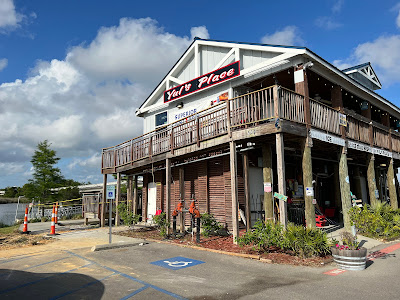 After walking along the water and grabbing a couple drinks at a waterfront bar we made our way to the second crawfish boil of the day (get ‘em while you can). Yul’s Place was just my type of spot with its isolated island location reached by bridge and away from the casinos and such. Yul’s Place is a popular stop with locals for booze and boils and a good time to go with it. We sat out on the second level deck overlooking the coast. The crawfish served here were much more aggressively spiced than the previous stop so I preferred them but would be happy with either, especially here in Chicago. 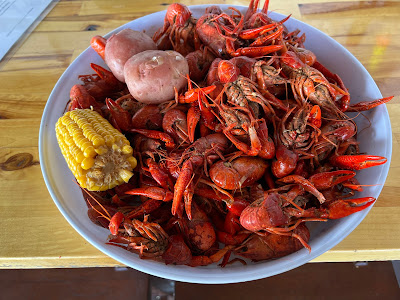 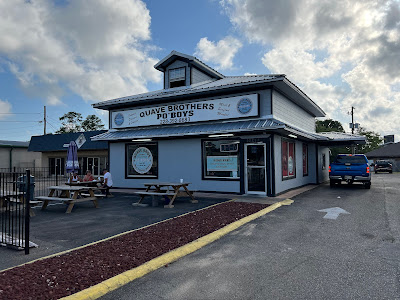 With its Gulf Coast location just a short ride from New Orleans, po boys are popular too in the Biloxi area. There’s a handful of spots that specialize in them but we only had the stomache space for one. I ended up picking Quave Brothers off of pictures and reviews. It’s tough to pick which style of po boy I prefer, beef or seafood. I guess a fried shrimp more times than not but I also like a roast beef po boy now and then and so I was told they make a great one here. So after going back and forth we decided to try the roast beef with debris. Though some spots will serve it sliced it’s much better when in debris form which was the case with this place. Po Boy spots in Biloxi will press the sandwiches which is interesting. Not quite up to NOLA standards but better than most of them from outside of there. 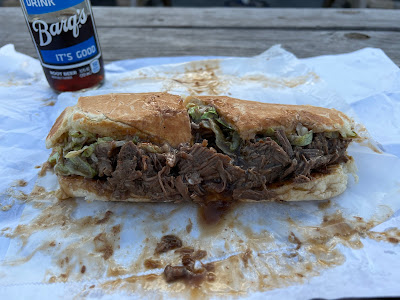 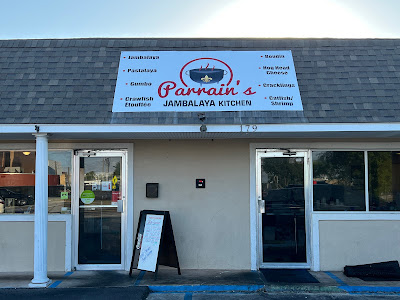 Parrain’s Jambalaya Kitchen was by the baseball stadium so we made plans to eat there before walking over to MGM Park for a Biloxi Shuckers baseball game. Parrains is a Cajun owned spot that gets lots of love for their jambalaya plus all the other Cajun dishes like boudin balls and gumbo. We shared a plate of classic chicken and sausage jambalaya and each got a cup of gumbo. Good stuff. 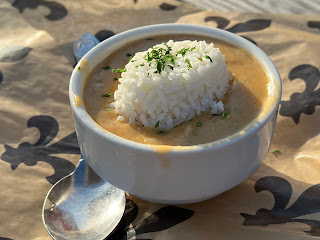 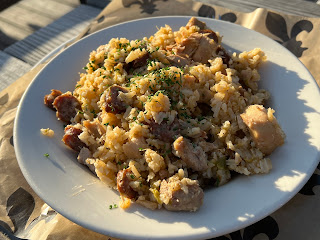 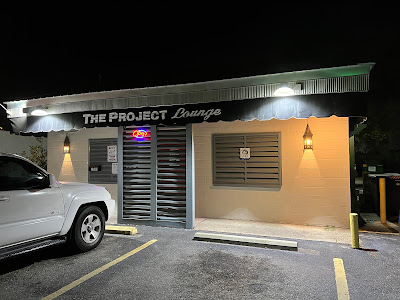 They did not have the char grilled oysters (discontinued) we thought they would at the baseball game so we ended up at this local bar for a burger afterward. The Project Lounge is a dive type spot that's not too rugged if that makes sense. The crowd was young and looking for a good time thus there were no bad vibes detected. Some say this is the place go for Biloxi's best burger (steak sandwiches are also popular). We split a cheeseburger which was of the thicker variety and cooked up right there behind the bar. Pretty standard stuff as far as ingredients and cooking of it goes, fresh beef, cheap bun cooked on a hot grill, but the burger itself was definitely not standard. It was f'ing awesome. 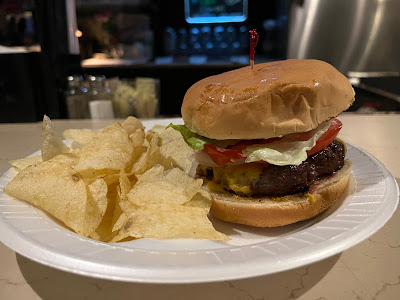 See ya next time @chibbqking
Posted by KingT at 10:09 AM