Rolling down Archer on recent Friday night brought me right past a couple taco trucks in Brighton Park which had been discussed over at LTH. Not remembering said trucks discussed we still stopped to check them out because one, they both had groups of people standing around them and two, who doesn't love tacos? I think it was around 11p when we made the stop and walked over to an unnamed yellow truck. 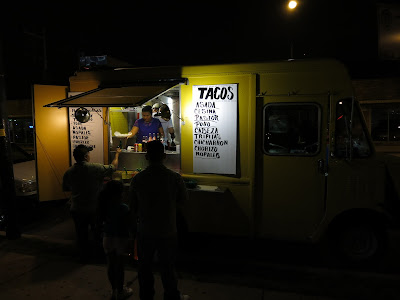 The first of two taco trucks on Archer

Both of the trucks are about a half block apart on the 4000 South block of Archer. They're basically right outside of a Supermercado El Guero. Both offer similar menus and make their own tortillas for the quesadillas and also shape their own masa for Huaraches. I don't think they make fresh ones for the tacos but in a city with 5+ tortillerias, you wont find many authentic places not using super fresh ones. I tried the steak and the chicharones tacos and helped myself to the wonderful display of fresh salsas and relish on the truck. The steak was very good but the chicharones were anything but crispy fried pork skin, just soft tripas. There wasn't a communication problem so not sure what went wrong. 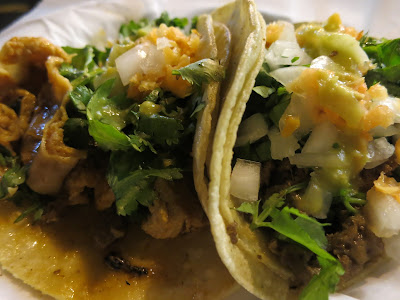 Taco Truck Tacos from the Yellow One on Archer

The other truck has a name and it goes by Lalo's. On this night it seemed to be the more popular of the two but both were doing good business. I'll admit the smells from this one were more tempting than the other but I think it might of been do to the fact that were cooking up so much. 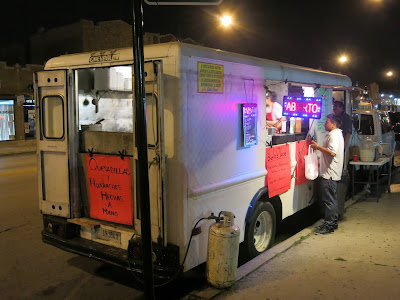 I decided to try an al pastor from here despite not seeing a spit and also got a steak quesadilla with grilled onions and cilantro inside. The al pastor was actually pretty bad. Fatty pieces of chewy pork couldn't be saved by their smooth and spicy avocado blend salsa. But the 'dilla? Damn! I hadn't had one this good since my trip to Puerto Vallarta. The fresh tortilla which was pounded out after I ordered was phenomenal. Inside of it the steak, grilled onions and tons of melted chihuahua made for a mess of a delight. I added in some of their pickled habanero mix and it was no joke. You need a knife and fork and some space to eat it over but what a glorious pain it is. This was a great Mexican Cheese Steak and something I'll be returning for. 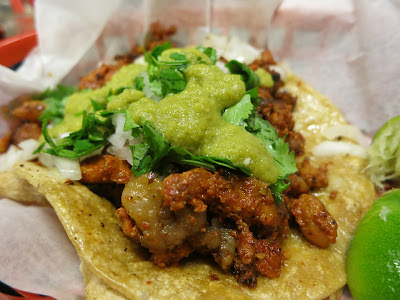 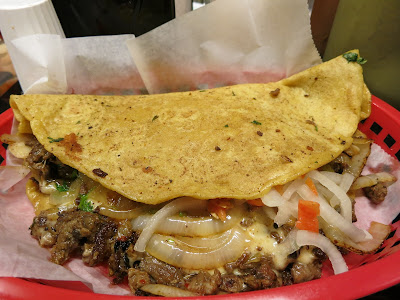