A day in Geneva

Eating like a local:
Regional food specialties
-Eating and drinking in Geneva, Illinois

Field Trip Time! Today the class heads out to the beautiful little town of Geneva, IL which sits in the Fox River Valley. Sometimes we need to ditch the city to find some inner peace of mind. Geneva is one of my favorite little places to do and since it's only about a 45 minute ride, it's a trip that can be done in a day. I've never stayed overnight but one day I imagine I'll rest my head at the Herrington Inn and Spa. The popular beautifully designed boutique hotel on the river is just one of a few things that make this place a popular weekend destination. Shopping, Outdoor activities, eating and drinking being the others. 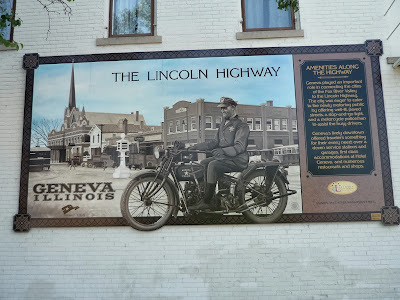 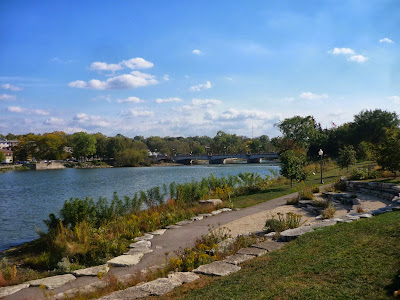 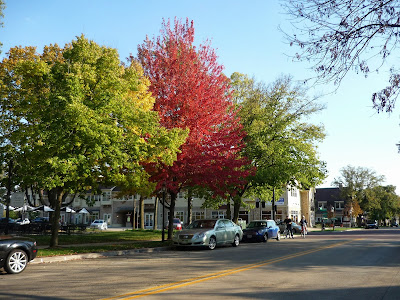 There's two main strips in Geneva. You got State street which serves as the towns hub. It goes right over the Fox River and is host to a ton of business' ranging from popcorn shops to bike rentals. Starting off on State Street you'll notice the awesome awning for the Geneva Theater which shares a space with the Geneva Ale House. This is where guys can go chill if their girlfriends or wife's allow them too while they go shop. Good cold beer is served here as well as some really tasty calamari. An Asian blend topped with Thai basil and peanuts that I really liked it paired with my beer flight. 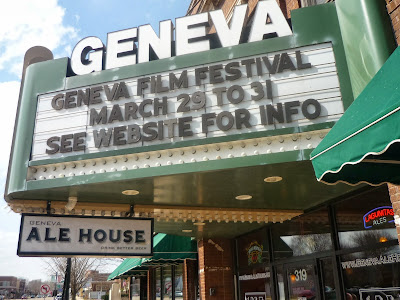 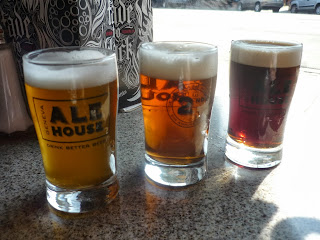 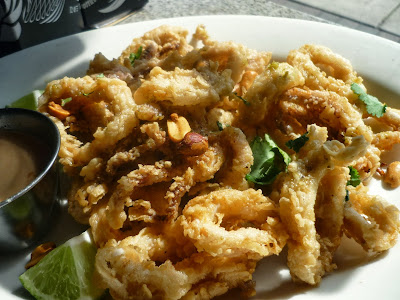 The other main strip in town is 3rd street. It meets State street and goes all the way to the Metra line. In between you'll find plenty of locally owned places offering an array of different things. Geneva is definitely more for the girls than guys so lots of the shops reflect that. Right on 3rd you'll find The Latest Crave which is one of those shops geared towards the hoards of woman and children that invade the town each weekend. They do up cupcakes, toffee and other popular baking trends so I'm sure they have cronuts, doughssants or whatever they're called as well as a nice selection of cupcakes. I remember liking the carrot cake version. 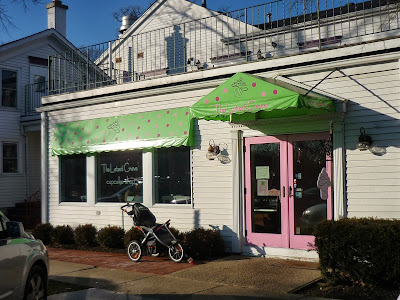 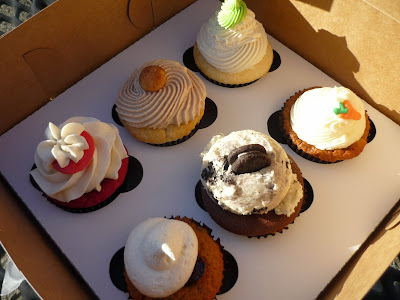 The Latest Crave
Further down a few miles on State street, in a shopping mall, like most suburban spots, is Josef's Meats & Deli. I've stopped thru here multiple times when I've been in town and can always appreciate their subs and homemade Italian sausage. I particularly like the blend made with red wine and green peppers and so does everyone else who has had some when I throw it on the grill at parties and such. 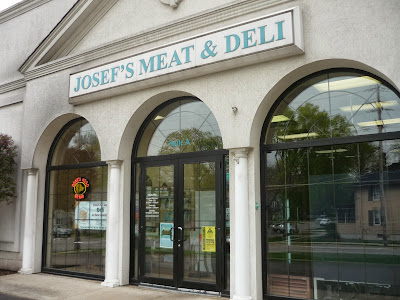 My reason for going out to Geneva somewhat often is Bien Trucha which is onr of my favorite restaurants in all of Chicagoland. I've already featured them over on an Aurora Area Mexican Eats feature that you can check out if you want to get a good idea of them. I pretty much love everything they offer and so do the rest. Expect a line on the weekend and even on most weekdays too. 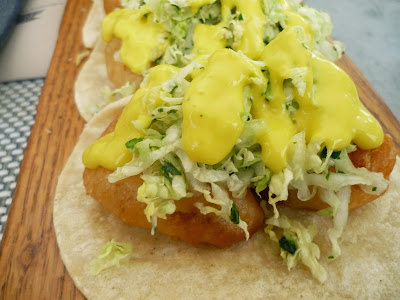 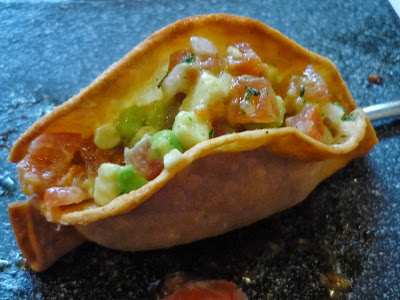 With the huge popularity of Bien Trucha the people behind it decided to open up another place next door. It goes by A Toda Madre which is urban slang for really cool. Well for a while I just wasnt sure ATM was as cool as Bien Trucha was and neither did most others. The place would sit half full while folks waited to eat at BT next door. But on my most recent visit to the area I was handed a menu from ATM which had been switched up since the last time I saw it. The first time around nothing on there caught my eye. So they must of switched it at some point bc now there's a few favorites from next door as well as other tempting options no previously seen. One of our favorites from BT is the flautas. We always have to order them. Well now they have similar ones at ATM except they make them with pork and use a different sauce on top. Still so good. 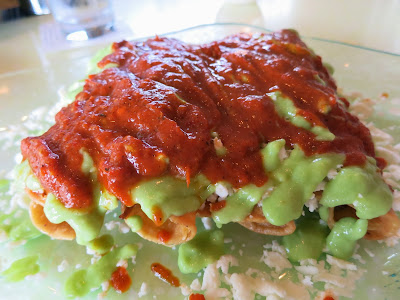 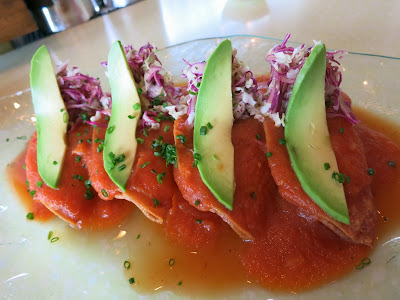 So where's a good place to go if you dont want Mexican food or cant stand to wait somewhere? I might suggest Foxfire. Important to note I dined here with a groupon which cut the price down some which I came to appreciate. It's a really nice space inside with an open kitchen in the middle. They have an outdoor patio in back which is where we sat on  nice summer night. This place gets an A for atmosphere. 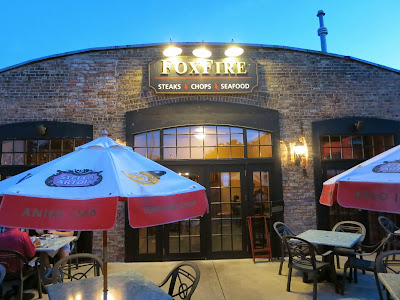 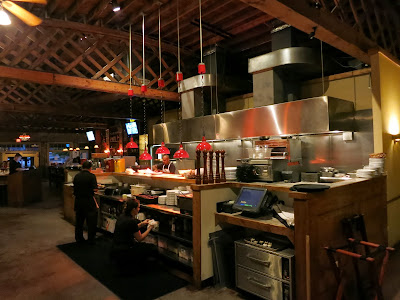 We enjoyed some reasonably priced drinks on the patio and decided to split a few things for dinner. Not pictured is the calamari we ordered which was good just not up to par with the rest. The French Onion soup to start off the entree was respectable. I've had stringer broths but I've also had weaker. My favorite of the stuff we tried was the sesame encrusted ahi tuna served over a bed of micro greens with a really good Thai ginger dipping sauce. She really liked the Shrimp Scampi which is a favorite dish of hers, here it came with some beautiful big tiger shrimp and plenty of garlic to boot. Big enough for leftovers to be brought home later. Overall this was a really nice dinner, service was fantastic and the atmosphere was very nice. 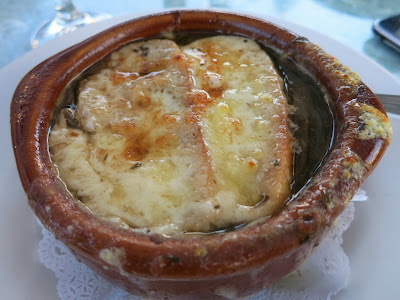 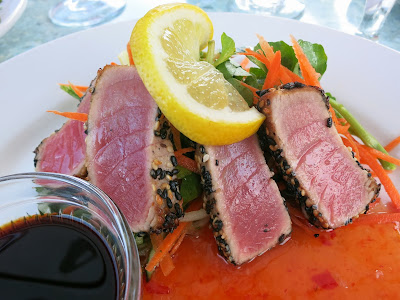 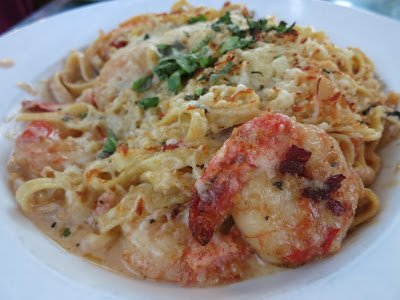 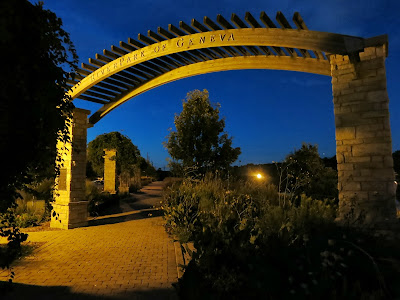 and this is where our trip ends...safe travels back!