It's been a while since we took a trip on the Chicago Hot Dog Stand tour so lets get back on it here today. It had been almost 6 years between my trips to George's Hot Dogs on Damen where they're currently celebrating their 65th anniversary with $.65 Cent Hot Dogs (Mon. & Tues. only, limit two). George the Greek has been here longer than most everyone else who's moved into the area since its renaissance began. 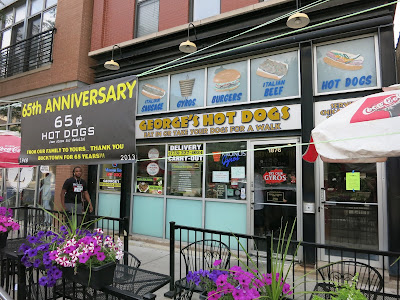 This place was a favorite of one of the county sheriffs I worked with for a couple summers back when. He lived in the area, which has seen a major rise in rent, and was loyal to George and his family. Whenever we'd stop in elsewhere he'd talk about how it wasn't as good as George's. While on the job of serving warrants we had the chance to try George's one time and I liked it but told him, I've had better. I think we were just ordering hot dogs back then and I've since returned a few times as I'm now a neighbor. First claim I'm going to make is this. They serve the best salad you'll find at any hot dog stand, Portillo's included. 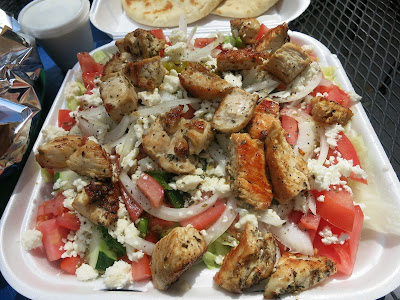 George's takes their Greek salads very seriously and boy can you taste the love in them. With summer here and tomatoes in season they manage to actually use some good sweet tasting ones along with tons of shredded lettuce, feta, red onion, oil, and seasoning. If you choose to upgrade with some grilled chicken you get an easy meal for two. But nevermind the bargain, this is a really refreshing well prepared salad. My teammate over at Serious Eats Mike Gebert aka Sky Full of Bacon recently did a little piece on the Chicago style fast food sandwich that gets little love, the grilled chicken. I've always been keen on these having grown up on Branko's and enjoying Mister J's back in my HS/College days. Since many Chicago style fast food stands are owned by Greek's it makes sense that many put out a very respectable well seasoned grilled chicken sandwich. George's is one of the better ones. 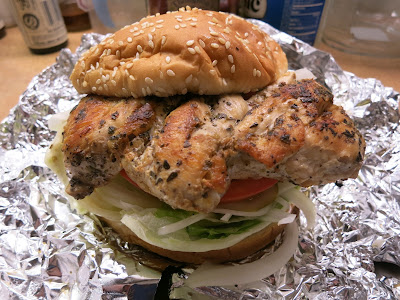 Another guarantee you're sure to find on the menu at any Greek owned hot dog joint is gyros. Of course George's does those and they still slice the old fashioned way which makes for a mix of both thick and thin slices off the spit. If you're feeling really hungry, or maybe just hungover, try the Greek Squeeze. Its a sub stuffed with gyro meat, grilled onions, melted cheese, tomatoes and their housemade tzatziki. For less than $7 I feel like this is one of the best bang for your buck sandwiches in town. It comes with fries and would be loved on any college campus in America. 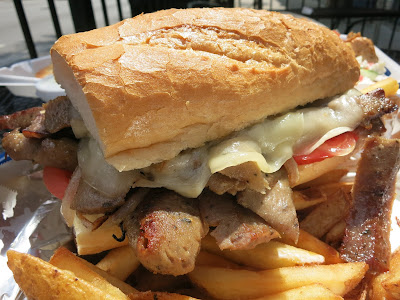 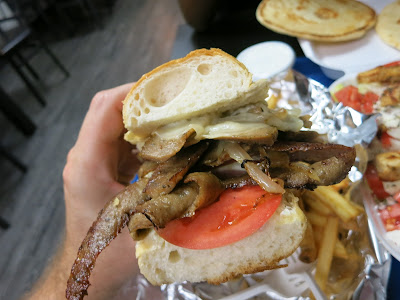 Don't forget the dogs. These are what George has been selling for 65 years. They do frozen fries but they're a pretty good variety and they stuff the bag full. Hot dogs are done traditional Chicago style and I like them but my only qualm is I've actually gotten better wieners on the recent anniversary special then I have when it wasnt going on. Kind of weird but this place is old school, they don't do it by the book and that's all part of the charm. Long live King George. 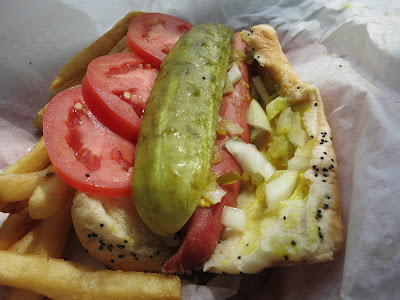 George the Greek has been here longer than most everyone else who's moved into the area since its renaissance began. Lej en pølsevogn