The Nosh at Wicker Park

There's been some really good eating going on all summer in a parking lot in Wicker Park. The Nosh Food Festival in Wicker Park takes place every Saturday, while weather allows, and features some local mom and pop food spots sporting their goods. Located in the parking lot of the AN Pritzker school I encourage all to get over there for lunch while the season is still in swing. With the ludicrous rules by the city of Chicago and its mayor we elected from the suburbs in place against food trucks so we need to support fests like this. 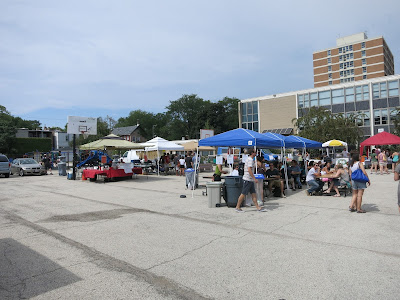 The fest itself might be 1/50 the size of the Taste of Chicago, but with all the politics not involved, the food vendors are much better. In fact on my trip there last weekend I wanted to try food from every single one. It all sounded good and most of the offerings weren't your average fair food. Take Pizzeria Valentino for example. Jeff is a friend of mine but that's because we share a similar love for Italian food. You might of read about his top notch pastas over at the Reader where they come heavily praised. Recently Jeff put the pasta on the back burner to focus on his wood fired mobile pizza truck and I was lucky enough to see what was up when I stopped by last week. 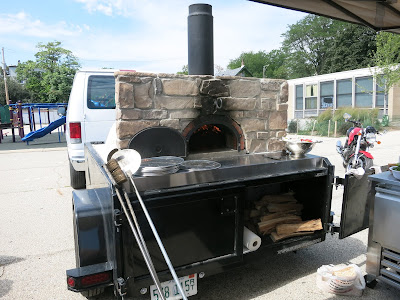 Jeff took a ton of time trying to figure out how to get his flour just the way he likes it and boy can you tell. Regular posters over at LTHforum are raving about the place and these people know their pizza.

"This pizza reminded me very much of my favorite style of pies found in New Haven, CT such as Pepe's, Sally's, and Modern Apizza...only better.' - Pigmon

"I was extremely impressed. The crust had a lot of flavor, nice chew, and I'm always a sucker for some charred bubbles on the edges. Really just a fantastic crust" - BR

"Stopped by the Nosh and had a wonderful funghi pie. Outstanding crust- only wish I would have asked for some olive oil to dip the pizza bones in like I always do" - Jazzfood

Not much more I can add except to say I totally agree with all of the above as did at least three other groups of people at the Nosh who came back to tell Jeff how much they loved the pizza especially the crust element. Like him, I like some crispy bits from the aforementioned charred bubbles. Sausage is always my topping of judgement and his with a nice fennel kick was great. Pizzeria Valentino is available for catering and you can call (815) 250-7206 to make that happen. Looks like I'm going to be needing to make an excuse to have a party sometime soon. 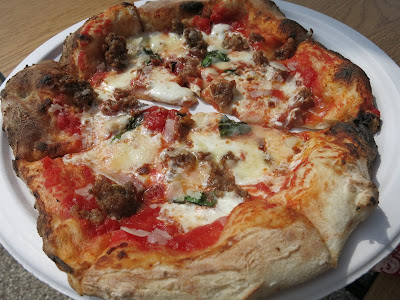 As good as Jeff's pizza was I had to contain myself from ordering another so I could try some of the other offerings around. Regular readers know my go-to cuisine of choice is Mexican. If there's a list out there that ranks gringos who consume the most Mexican food in order from top to bottom I guarantee I'm near the top. One of my favorite eats from that genre is Cochinita Pibil. So when I saw that Mixteco Grill was serving a torta with the spicy shredded pulled pork which is a specialty of the Yucatan, I had to have one. Served with a black bean spread, pickled red onions, mayo and salsa for $6 this was so good. 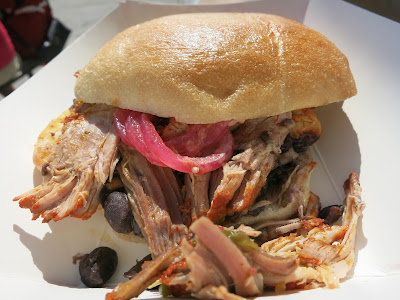 We don't have many places offering the awesome cuisine of Indonesia here in Chicago. But we do have a place that does pop-up dinners featuring some of the foods from the southeast Asian country. The Rice Table has been on the scene for a while now but I never got to try them until Nosh last week. 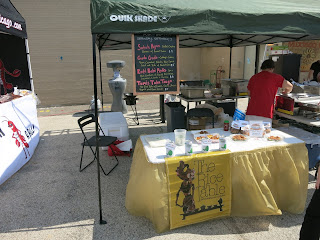 Rice Table changes up their menu each week at the Fest. Last week they had some really tasty sounding items so I was tempted to get a sampler plate which had some of everything but I'd just ate what you already saw. So me and her decided to split a Roti Babi Petis sandwich which was sensational. Indo spiced pork was put into a bahn mi roll and topped with pickled red onion, cilantro, cucumber and papaya. On a hot summer day, this sandwich was the perfect bite for it. 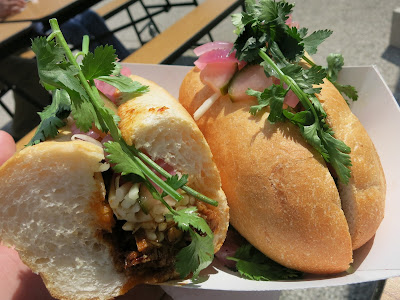 Then last but not least is Zarlengo's. If the name sounds familiar you might of seen their stuff at some food stores of late or remember them from the Italian ice roundup I did last summer. One of my favorite spots in da 'land for Chicago's signature summertime treat they also do some really good gelatos which Tommy has been pushing. I'd heard over twitter how good the sweet basil offering was and was excited to see it being offered on a stick at Nosh. So as it turns out, they pack quite the 1-2 punch out there in Da Heights. My only complaint is why cant I get these by the box full somewhere near? They'd make for a great late night sweet snack. Thanks Tommy! 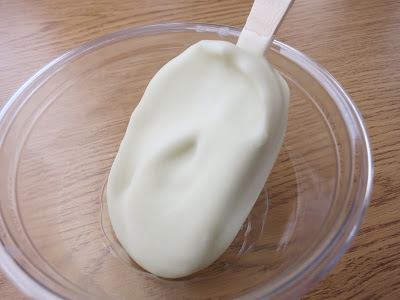 The Nosh at Wicker Park
Saturdays While Weather Allows
Website
Posted by KingT at 10:30 AM