-Snoopin' around
a peak into my favorite food sites/reads

If you haven't seen or read 'The great tamale migration' piece by Mike Sula in The Reader you're probably just a handful of people. Or at least that's the vibe I'm getting having stopped by a few times since it was printed to see Yoland, the man featured in that article. People are coming up from all over. Just the other day as we were chilling talking kool-aid pickles, a guy stopped by who had rode the bus all the way from the southside of the city in Englewood after reading about his "favorite treat from back home". Article in hand when arriving, the old timer looked like a little kid on Christmas. 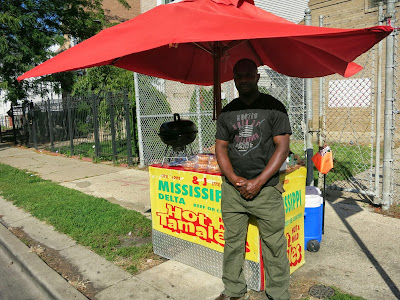 For those unfamiliar with Delta Style style tamales I'm going to lead you to this piece I did about a trip thru there me and a couple friends made that to this day might be my favorite food'venture I've taken. It was full of rich history and wonderful people and those amazing hot tamales which you can find just about anywhere down there. With Chicago having a rich connection with Mississippi you'd think we'd have more options for them up here but that's not the case. I'd met Yoland a few years ago when word on LTH spread that Delta Style Hot Tamales were found. Then the liquor store where I tried them no longer offered any and just like that, they weren't available...to those not in the know. 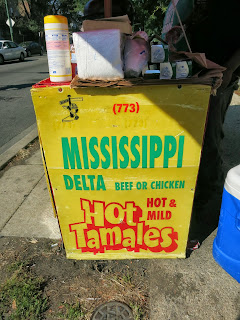 A couple of friends who had originally found him, found him again on accident when one of them butt dialed him. Best pocket dial ever! They passed the news onto Mike (Sula) who in turn spread the wonderful word that Yoland is indeed still around. You can find him at 909 N Laramie in the Austin neighborhood where he also serves bright red Magnolia sausages and offers his tamales two ways - traditional beef and also chicken, which comes shredded inside. If you ever need a large order he'll do that for you. I bought 120 to bring to the LTHforum annual picnic and they went like they used to back when the great migration from the south first started and men could be found selling hot tamales on the city streets. "Seasoned to your tastes, nothing goes to waste, it's all good in the hood" is Yoland's saying and "all good" is what these little treats are. I'm very happy to have him back on the radar. As are the constant flow of cars driving by honking to say hi. Mississippi stand up! 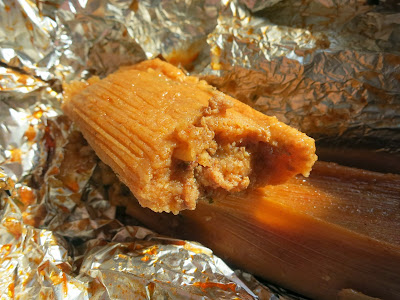