I was lucky enough to be in Texas earlier this month and thru the lovely (and sometimes ugly) world of social media I learned that it was also Hatch Chile Fest at Central Market locations throughout the state. If you've never been to one I think they're one of the best regional grocery chains in the country. On top of stacking up on Chili powders they had Hatch everything going on including the roasting of them out front. Hatch Chiles are native to Hatch, New Mexico and are only available for a few weeks each August up into September. I was able to stuff 12 pounds into my carry on bag and I spent a week cooking them while roasting and then freezing the rest. 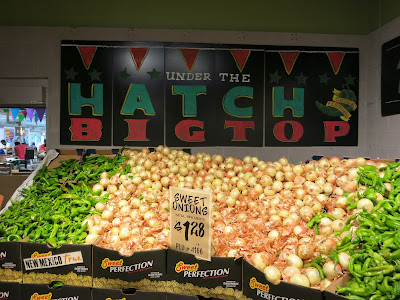 It's a shame these unique tasting peppers dont really make their way down to Chicago but someone over on LTHforum had mentioned seeing them at Whole Foods in the suburbs. Maybe thay had some this year but I can almost assure you they weren't the .98 cents a pound I paid. No problems with TSA at the airport as I stuffed my backpack with them and made the car smell wonderful on the ride back from it. 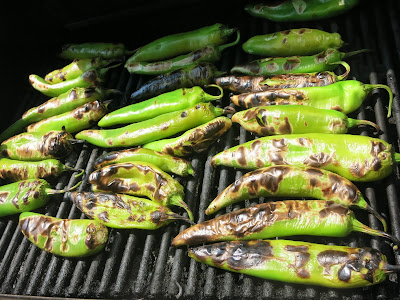 Lots of places near and around New Mexico including the market I was at in Texas will roast the peppers out front in one of those spinning rigs. People that live near and shop at these spots have the good fortune of buying Hatch Chiles roasted and ready to go. I had to roast my own and its really not all that hard on top of tha fact your yard will smell great when doing so. Grill or over the stove works and the key is to throw them on when its really hot so that they blister to black asap. This makes for the peeling of them much easier. 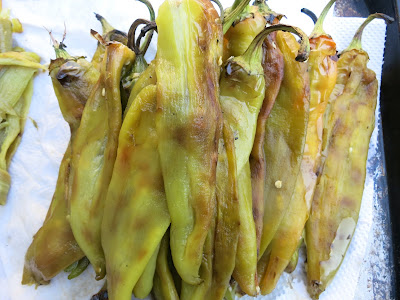 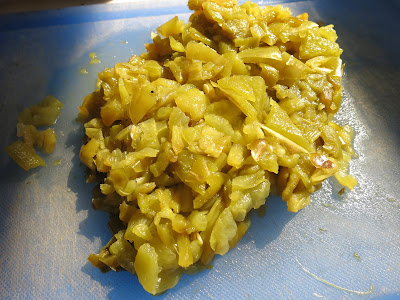 Chopped and Ready for Use


First up is Guac. Hatch Chiles are great in it. I usually make mine with diced onion, jalapeno, garlic, cilantro, lime, and salt and maybe some tomatoes if they're around. The addition of the peppers and their subtle smokey flavor that just tingles your tongue made for some of the best I've made. If I had access to these chiles on the regular I'd always use them in any guacamole I'm making. 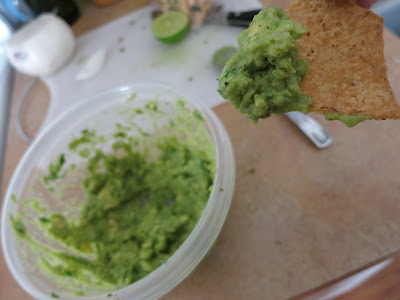 My first day back we got into town early and the smell from the peppers in the car was too much to resist. I decided I was using some that evening and jumped online for an idea.The Colorado Burrito was the one that first caught my eye. I followd it to an extent but like to add my own touches to things now and then. 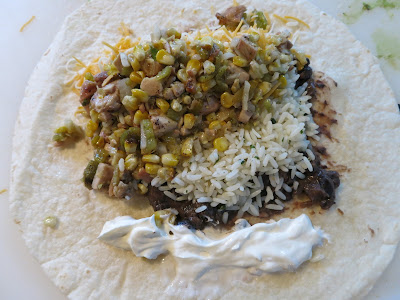 Just about ready for rolling

My additions were a black bean spread made from chicken fat and stock as well as choosing to roast the corn on the grill and then take it off the shuck. Also some diced avocado. Last but not least, I grilled chicken thighs and then chopped them up and reheated them with sauteed onions and the hatch chiles which are what really made this thing wonderful and something I'll cook again using some of my frozen ones. 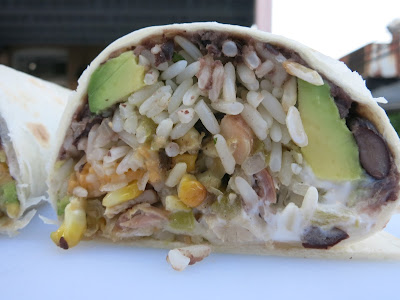 There's two things I knew I was making as soon as I had the option to purchase some first one being a New Mexico style Green Chile Cheeseburger. Some day soon I'll get myself to Santa Fe which has always been high on my US places to visit list. When I do I'm for sure hitting the Green Chile Cheeseburger trail. I've always wanted to since I love a good green chile cheeseburger but never had one in it's own backyard. Well I'm not gonna be bashful, the places I do go too have some high standards to meet. From what I've gathered many places in NM do them different but they all share the namesake green chile. I'm not sure if all the places there use Hatch Chiles exclusively because of their short sprout life each year. You can freeze them but you'd need alot of space to store enough to get you thru the year. 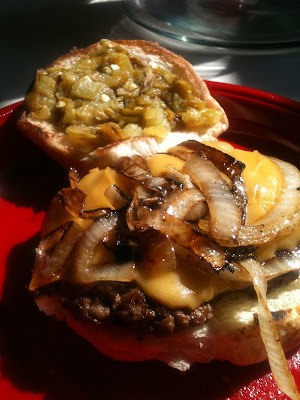 Simple recipes for both styles made. Take small ball of fresh beef and put it aside. Take a thinly sliced fully intact onion and place it on a hot flatop with melted butter, let it cook then flip after a few. Take beef and place it on flipped onion and smash it using something powerful enough to do so while not getting burned. Add cheese, let it melt, add chopped green chiles. So simple so good. For the other I sauteed a bunch of diced onions in butter and and cooked away until they started to brown. Then add the chopped Hatch Chiles and heat thru. I used the relish atop a beautifully thick char grilled burger with melted Colby Jack cheese served on a toasted bun. I eat alot of burgers and these two might of been the best I ate in sometime. 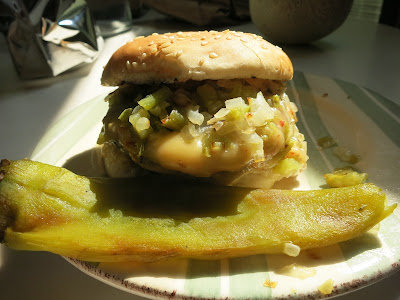 So the combo of beef and Hatch chile turned out to be as good as advertised. Now the other thing I knew I was going to make was some Green Chile Stew. I used a recipe from the Pink Adobe cookbook. It's an old one made with recipes from a restaurant that shares the same name. Again I loosely followed this. For the pork I used butt, it was perfect but keep in mind it needs more time if using it. As always with chili and stews they're best made a day ahead. The next day I added in diced potatoes and also corn which I roasted on the grill then sliced off the cob. For serving I added diced raw onion, chopped cilantro, shredded colby jack cheese along with sliced avocado and some blue corn chips tucked alongside the bowl. Some excellent stuff. This I'll be making one day this winter. No doubt about that. 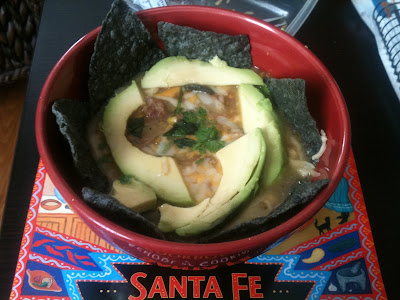 See ya next time @chibbqking
Posted by KingT at 12:00 PM