I've become a big fan of Peruvian food since first being introduced. I'm not sure I've got the full taste of everything they offer so I try and check out places offering one of the trendiest cuisines in the country. So when I saw on Groupon that 4 Suyos had a deal being offered I decided it might be a good way to try the place. For just $20 I was being offered an appetizer to share and two entrees. With it being a BYOB I thought "Why not?". As is the case with most other groupons I buy, I almost let it expire before using it. 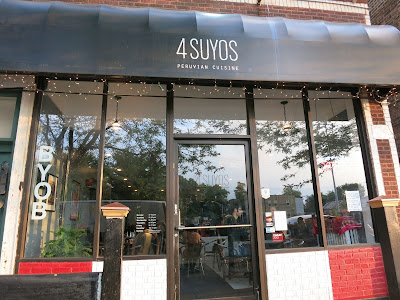 4 Suyos is tucked away on Fullerton between Western and California. If driving by you might not see it blended in with the other businesses behind the trees across the street from a popular public soccer field. There's outdoor dining and the aforementioned BYOB which makes it a nice place for a weekday date night. I was tempted by some of the specials that day but our Groupon only allowed the appetizer to come from what's written on the regular menu. Mussel's are always ok by me so we went with an order of the "Choros a la Chalaca" which sounded like a good way to start. 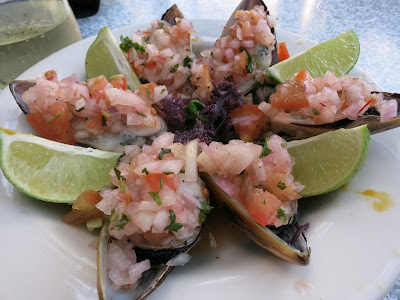 I was expecting these to come served warm but they were chilled. Maybe not was I was expecting but not a bad option on what was a nice hot summer day. The mussels were plump and the salsa was in season. She had the seafood rice paella. It was pretty good but just not great like this dish should be. The calamari was a little bit too rubbery and the rest of the seafood was thrown in with a minimalists hand. I liked this dish but that's considering the price with the Groupon and all. 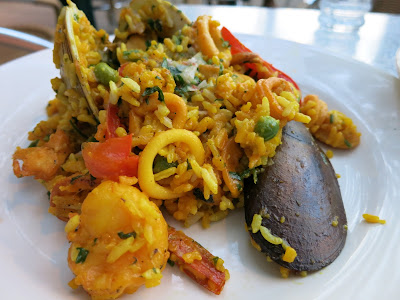 I had a tough choice for choosing my entree. I'd wanted to try the Jalea Mixta which is a bunch of different seafood fried and served with a salsa criolla but I also know that lomo saltado is one of the countries national dishes and something I enjoy eating. So I went with the saltado. To make this national dish you take strips of steak and serve them with french fries sauteed with onions, tomatoes and other options that can vary from space to space. I'd recently made this dish and really enjoyed my creation so I was going to hold 4 Suyos to its level when trying theirs. Unfortunately it just didn't live up to mine. Despite the use of good local meats the steak was just bland and not cooked properly. It tasted more like it had been steamed than sauteed which was too bad because I really wanted to like this place. Friendly service but just sub-par food. 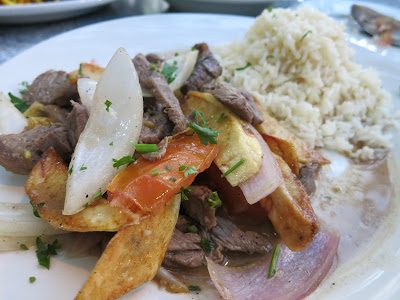