Those of us that follow the excellent stuff Mike Sula does in the Reader know that there's a new big boy in the Chicagoland ramen game, and of course it's out in da burbs. Ramen Misoya comes to Mount Prospect via Japan. It joins a list of cities with locations outside Japan that would make an excellent travel itinerary before one bites the dust. New York, California, Bangkok, Montreal, Sao Paulo and now Mount Prospect?!?!? Yep as Sula said "sometimes the Suburbs are superior" and when it comes to Asian noodles I couldn't agree more.

Misoya is a pretty small space but they have a room next door with waiting seats and some magazines should there be a wait. Inside there's an L shaped dining counter that can seat maybe 16 and then there's about 7 tables for groups of three or more. No wait tonight but it was a Monday in August and the business was still steady. I have no doubt there's going to be lines at prime time as the weather cools down.

a view from the counter seats

Mike's much more polished with ramen than I am so I suggest you read the linked article to get a better idea of what they're doing here. It's different than Santouka and all other imported Japanese ramen chains I've visited. First off no authentic Tonkotsu style ramen here. They serve three different regional varieties. All are made with miso paste as a base. There's signs explaining it's benefits on your bowels (no not what your sipping on, what its going to go thru) and reasons it's healthy for you. Misoya score points over Santouka for a few things. One is the fact they serve beer (Sapporo) and also have a few appetizers on offer. The Japanese fried chicken made with thigh meat was really good bar food. I hope we can start to get some izakaya chains from Japan that specialize in this sort of fare. I visited a spot in Toronto that would be packed around the cities Northwest Suburbs.

Ramen is what they do here. The menu offers you three different styles and Mike was high on the Kome Ramen so that's what I got. Boy was it deep in flavor. Bowls come with ground pork, bean sprouts, green onions, bamboo shoots, fried potato wedges, and yellow corn and the noodles are spot on. There's all sorts of other options you can add into your bowl. "Cha Su" style comes with some wonderful pork loin that's cooked and then grilled to give it more flavor depth. Add the hard boiled egg like Sula said. 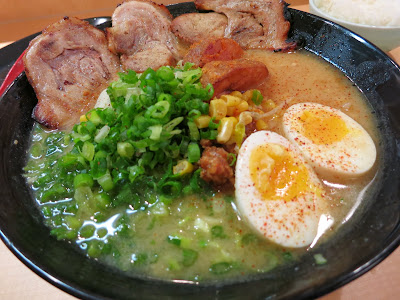 WOW! This bowl wasn't cheap. Its actually around the same price point of the popular city spots but it was also on an entire different level. I'm not going to say I liked it more than Santouka but I'll say it was sensational. It was also a belly buster. My friend said he felt high afterwards. More bonus points scored for the fact they're open until 10p and have that izakaya atmosphere when you enter and leave, employees acknowledge it. It's really a matter of preference as far as which chain is superior. Whats not a question is chains in Japan are so much better than they are over here. I don't see how you wont like this place if you like ramen.

This is a hype I can ride behind...

If you want your ex-girlfriend or ex-boyfriend to come crawling back to you on their knees (no matter why you broke up) you have to watch this video
right away...