I've been working on a taco tour thru Aurora for here or maybe elsewhere and while I was on it I met my summer fling. In today's world it's rare to not google someone you're interested in after you've met them. So after me and Mangonada shared a kiss on our first date I was at the computer seeing exactly who this girl I had been seeing so much of was. 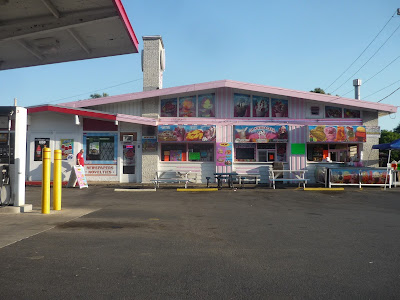 If you feel like you've heard of or seen a place with the name Paleteria La Michoacana but are positive you haven't been to Aurora in over a decade it's probably because you've seen the Michoacana name elsewhere. It's the official ice cream of Tocumbo, Mexico. The small town is the home of "Michoacan" ice cream which is named after the state where it's made. You know Baskin and Robbins and Ben and Jerry and others but this is the biggest ice cream empire most people haven't heard of. It literally runs the town making sure the wheels go around. My stop to a location attached to a gas station in the suburbs of Chicago revealed that there's over 30,000 places selling this style of ice cream around Mexico and quite a few here in America. I now have a new project about these spots which is already under way. In the meantime I decided to try a mangonada while there and she made a lasting impression on our first date. 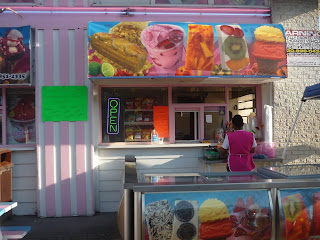 I had seen mangonadas advertised on plenty of self written signs and self taken pics throughout the city's Mexican neighborhoods and was waiting to try one when the time was right. Well it was 90+ degrees out on this day as I stopped for a quick gas fill up before heading back to the city and there she was staring at me. Mangonadas were advertised via photograph and they looked fantastic so I asked for a dance, there was no turning back. She swept me off my meet making me want more. 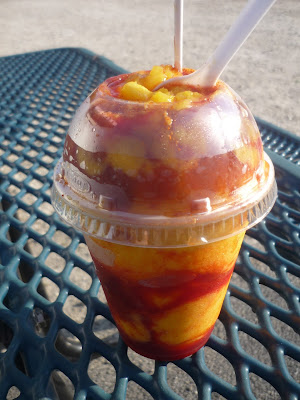 The friendly lady behind the counter asked me what kind of ice cream I wanted. The most commonly chose one is mango which I guess makes sense. But the possibilities are almost as limitless as the flavors of Michoacan style ice which can range from common fruits like mango and strawberry to crazy flavors like avocado and poblano. The lady taking orders outside whipped up my drink like a real pro. I was surprised by how many ingredients were going into it. On top of the ice cream in goes a chopped mango, the juice of oranges and limes as well as salt, chili powder and Chamoy sauce. The last of which is a common condiment in Mexican cuisine made with different pickled fruits that's blended down into a liquid paste. Apricot, mango, and plum are most often used. 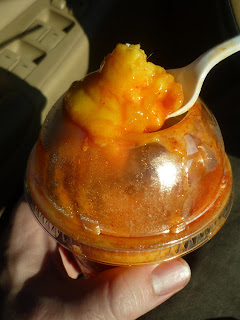 The final result is a refreshing mix of sweet and spicy with the texture of a milk shake. I was blown away by the flavors in this version which it turns out is becoming a very popular treat around some California towns and right here in Chicagoland where Louisa Chu did a story on a shop in Cicero serving them. I've since tried a few and while none have matched the place bearing "Ice Cream City(s)" name I found a new favorite dessert place called Los Mangos which I had seen a few of but never stopped in until the need for some time with mangonada hit. 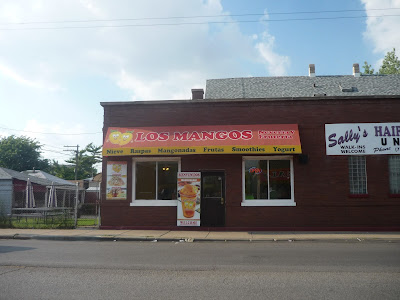 There's a few locations of this popular summertime family stop that offers ice cream, fruit cups, fresh juices, paletas and snack foods such as chicharones con everything. I have yet to try the Jarriloco pictured below but plan to on my next visit. I'm not sure what's in it besides a bottle of Mexican pop but it looks like it could be good in a glutton sort of way. They'll ask you if you want your mangonada blended here which I think is the way to go since the fresh chopped fruit hasnt been quite ripe enough on my visits in. Also notice the use of the candy straw here which is common elsewhere but not used at the stop in Aurora. A quick google images search reveals a graphic which describes how these are made. I'm thinking of adding Tequila into mine next time. 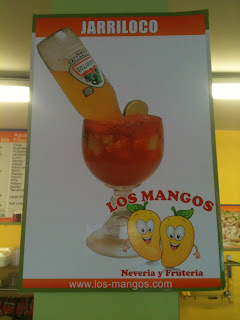 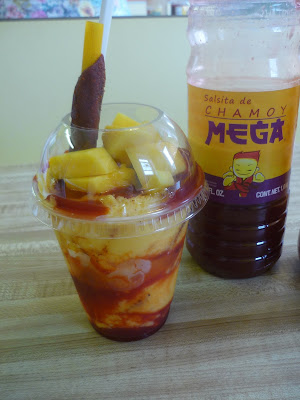 An unmixed Mangonada with a bottle of help yourself Chamoy Sauce