-Snoopin' around
a peak into my favorite food sites

Hey all good news! You can now read more of me over at Serious Eats: Chicago. Your favorite food site editors favorite food blogger has joined the team as I try and show some love to the Southside and elsewhere. I'll make sure to link any stories from there to here. First up is a Mexican owned shrimp shack in the shadow of the Stock Yards. 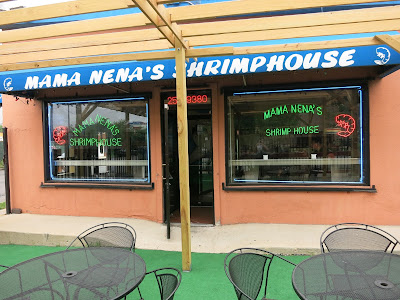 Congrats again on being over at Serious Eats Chicago. They truly needed a true Chicago voice over there, and not just some transplant from somewhere else in America who now calls Chicago home. Many of their writers can't grasp many traditional Chicago classics such as our thin crust pizza, deep dish pizza, Italian beef, etc. I know you're not a big fan of deep dish pizza, either, but at least you can acknowledge its' inherent traditions and roots within this city. This is totally lost on transplants. They will NEVER get it, and they often throw their noses up in the air at both deep dish pizza and Chicago style thin crust in favor of the trendy Neapolitan pizzas or various East Coast pizzas. Yes, there are some great Neapolitan and East Coast pizza places in Chicago (i.e. Coalfire and Spacca Napoli), but places like these can all be had in other parts of America.

Places like those are not the pizza we grew up on here, and definitely not the pizza that your normal everyday Chicagoan eats. That honor would go to places like Q's in Hillside, Villa Nova in Stickney, Pat's on Lincoln Ave., Joe's Italian Villa in Bridgeview, Bill's in Mundelein, and when it comes to deep dish- Lou Malnati's. These are the true Chicago legends that we all grew up on, and these are the places that should have been on that Serious Eats Chicago Best Pizza list. But instead, they chose places that mostly had NOTHING to do with Chicago or what Chicagoans actually eat on a daily basis. And that's the problem with many of their writers- they are not born and raised Chicagoans, yet they write for "Serious Eats Chicago." They really aren't qualified to be writing about our home grown foods, and that ridiculous pizza list proved that. Well, at least they got Armand's right. That was it.

Thankfully, you are in a position to change all of this with an honest assessment of the real food scene in Chicago where actual Chicagoans eat, and not the hipster, trendy, transplant places. Sorry about the rant, but what I'm saying is true, and I have to call it like I see it.

Hopefully, you can introduce them to Al and Joe's. Many of their writers probably will not like the place because it's far from Wicker Park, Bucktown, Lincoln Square, North Center, etc., and they don't use D'Amato's crusty bread. But to me, their Italian sub with their secret sauce sold by the bottle is the best in the business. And Al and Joe's is another one of those places where actual Chicagoans and people from the neighborhoods actually eat on a daily basis. Thus, it probably will not go over well with the folks at Serious Eats Chicago because it's not quite hipster enough for their tastes. But at least you can vouch for the place as an actual Chicagoan.

Again, sorry for the rant. Food blogging is a hobby for me and, quite simply, a nice break from the reality of what I really do for a living. And I'm still waiting for that thin crust pizzathon, buddy.

Start following our trades today and profit up to 270% daily.