Baseball season and summer is around the corner and that means a few trips to Milwaukee are in store for us Cubs fans. I've made no attempt at hiding my hatred for the Packers but that's about where it ends in my hate for the great state of Wisconsin. During the summertime it's a foodies paradise and I'm not sure there's a state out there that has as many unique regional dishes famous to the state. Although Wisco is rich in food and beer from top to bottom and left to right it all centers around Milwaukee. The little city to the north of Chicago that shares Lake Michigan with us is one of the best places to take a short trip to eat and drink during summer. Its so close people sometimes forget just how fast you can get there shooting down 94. I'm not one of those people that forget and neither are most Cubs fans who flock to Wrigley Field North for every Cubs/Brewers game over summer. Not to mention Milwaukee is home to the world's largest outdoor music fest. Milwaukee Summerfest is always a prime location for girls and fun, and when paired with beer I've never been and not had an absolute blast. Even though Summerfest is a two week event, drinking is a year long thing and the pub's around the city are always packed with people during summer. 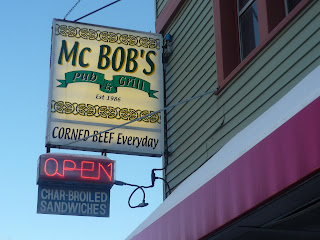 Next time you take a trip north check out McBob's Pub located on the West Side not to far a drive from the ballpark. McBob's looks like your average Milwaukee Irish Pub from the outside and when you first enter it looks the same. There are loads of regulars drinking, smoke is in the air and everyone seems to know each other and has a shot in their left hand and a beer in their right. Its an Irish pub so most of the people are there to get hammered and they include people of all sorts. Like alot of bars that haven't outlawed smoking there's an unusual smell in the air and you might ask yourself what it is. Its the combination of beer, smoke and corned beef and if its a Wednesday or Friday its even more pungent when the fish fry is going on. You wouldn't know it unless you were told or are a local but McBob's has some of the best pub food in the state of Wisconsin and that's high honor. 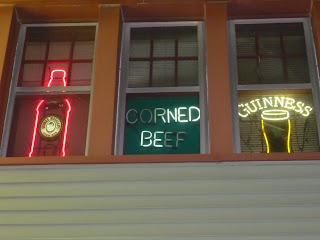 McBob's like many Chicago bars is attached to a house

The highlight in the month of March is St. Patty's day which means pints of Guinness poured right, shots of Jameson, parades and corned beef. In Milwaukee there's actually quite a few legendary places to get a great corned beef sandwich and it is often left out when people talk about the great food finds in the city. It's right there with the fish frys, butter burgers, brats, cheese curds, custard, mustard, Kringle, fruit pie's, bloody Mary's and beer. Over at McBob's where the customer base is as diverse as the neighborhood everyone is there for one of two things but most are there to do both. Eat and drink.

The corned beef sandwich at McBob's is the star of the show that has many stars. It's pretty much unlike any other corned beef you have had or at least that is the case for me. McBob's doesn't machine slice their corned beef but rather hand cuts it into much thicker pieces than one is used to. The result is some of the most tender and rich in flavor corned beef I have ever tasted. The meat starts falling apart as soon as you pick it up. Its kicked up another level with the horseradish mustard but then is brought down a level with the bread that they claim to be Rye but looks and tastes much more like plain old white bread. It's a shame because if this corned beef had some real Rye then it might take best in country because the flavor is the best piece of cured beef I have had the pleasure of inhaling. McBob's is open for breakfast and drinks in the early morning and is said to have a great corned beef hash in the same style as the sandwich. Big hunks of corned beef with chunks of American potatoes and some onions all thrown on a plate. 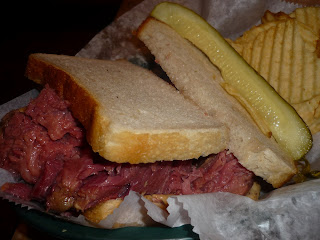 Sandwich as it arrives 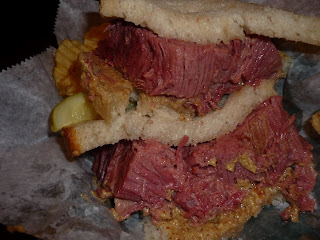 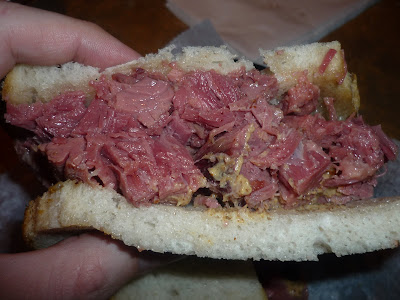 One of the more famous foods of Wisconsin is the Friday fish fry. It's damn near impossible to find a restaurant/tavern in the state that isn't a chain that doesn't do a Friday night fish fry. What started out as a way of not eating meat on Friday's during lent season for Wisconsin's Roman-Catholic population has turned into a Friday night ritual that is a year long thing enjoyed by everyone. McBob's not only offers it's Fish Fry on the traditional day of Friday but it's also available on Wednesday's. They get the fish fresh every Wednesday and Friday mornings and its the real deal. McBob's offers up three different types of fish for their fry. The Lake Perch, Walleye and Grouper are all available as combos or you can do what I do and order the super combo (all three). McBob's does a wonderful job of pan frying the fish in a highly seasoned but very light coating.

Another classic Wisconsin stamp on the Friday fish fry is potato pancakes. Usually places will offer their fish fry with some homemade potato pancakes and McBobs is no exception. The pancakes on the fish fry over there are homemade pieces of super thin pancakes with bits of onion that are served beneath the fish. The combination of the two is pure heaven. Another very popular food item I have yet to try on McBob's menu are their Irish Celtic tacos. Basically a white trash taco of a large flour tortilla covered in ground beef, lettuce, tomatoes, onion, sour cream and salsa. Don't bother asking for a fork to eat them with. Served Tuesday, Thursday, Saturday and Sunday. 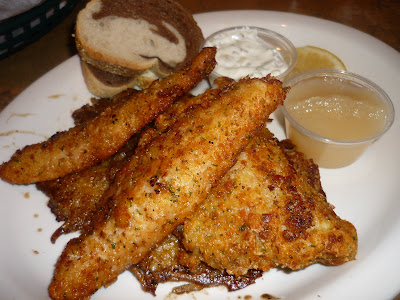 What can I say? Cubs fans like to drink, yes even the real ones who know the game, history and players of the past and present. They serve the best summertime beer in the world at Miller Park. If you think I'm talking about that best beer being Miller Lite or any Miller product for that matter than stop reading, you don't belong on this site. Spotted Cow as I have mentioned before is a great beer and along with Guinness makes up my favorite brews on earth. I'll drive to Milwaukee to eat dinner and that's just what I did to document my favorite local pub/eatery in the city. Now you should have no problems making a weekend trip and taking a scenic cruise down the lake or just take 94 if you want to get there and start eating ASAP and see a game or two. Its easier to get tickets for a Cubs game there than it is Wrigley and to be quite honest there aren't nearly as many stupid people that are there to drink, tan and be seen as opposed to watch the official game of summer and enjoy a beer on a nice beautiful day.

no way that's rye. how bout gettin a CB sandwich to go, bringin some of your own rye and hangin out in the sun & make your own?

a friend told me it's free breakfast on st pats' day? is this true???

Just thought I would let you know that it is a lite rye from Miller bakery which has some sour dough also in it. But we have listened and we are having our baker make us a rye that might make you a little happier. As for the free breakfast on St Pats that is correct and it is from 8:00 - 10:00 a.m. See you then.

Thank you so much for the tip. We visited my husbands parents who live in Whitefish Bay and brought them to Mc bobs for dinner after reading about it your site. It was everything you said it was and then some more. I cant wait to go back and go into Chicago try your other places on here. Thanks!

McBob's does have a great Friday Fish Fry. If you go, try the combo platter to get to try differnet kin ds of fish. My favorite was the Grouper even though it isn't a Wisconsin native. The walleye is good to. You can find any kind of fish fry in Milwaukee by the type of fish, the location or the All You Can eat by going to http://milwaukeefishfrylist.com/

How can I pick out the best product from those listed on this site?Best Homall Gaming Chair

Who can pick out for me the best product from the list provided in this site? Best Chainsaw Chain