Rosangela's Pizza in Evergreen park has been a south side institution since 1955. Its been mentioned elsewhere on this site how 95th St. has quite a few chow worthy destinations and this is the spot for pizza in the neighborhood. There was a time when this spot was in my regular rotation back when I was kid and hung out on the south side with my cousins. One day over time since I started this site I had driven by and decided it was time for a return visit...a much overdue visit. It was like stepping back in time as far as the flavors go but they done a little redecorating since I had last been. While the sign and flavors had remained the same it wasn't quite as old school looking on the inside but that's not a big deal as long as the pizza pie stayed in its classic design. One thing that I hadn't remembered but I'm sure glad its etched into my memory now is how good the sauce on the pizza at this place is. One thing that most of these old school Chicago pizza taverns have in common other than the pizza style and atmosphere is that almost all of them were started in the '50's. 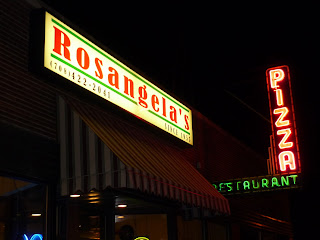 Rosangela's has been around since 1955 and I'm going to imagine that the pizza hasn't changed since then because its the same pie as 15 years ago and I don't think they would just up and change it like that. I remembered Rosangela's for a few things among them were the large pieces of Italian sausage loaded on the pie, another one was their distinct crust and dough that's very light and flaky and a great sauce. When the pizza arrived all of those things remained a constant as far as looks go. The pizza was the same as I remember and it has become my favorite thin crust that isn't exactly cracker crisp. I love the big chunks of sausage that are suffocated with a heavy amount of cheese while the sauce is outstanding. Its kind of like a tavern style deep dish in some ways. The crust is unlike any other I have had and I am by no means a pizza expert but I do know a good Chicago style thin and this is right up there with the best in my book. I love the fact that is hasn't changed and the service is still as friendly as ever. This here is a great example of an old school Chicago pizza tavern joint that generations of family's have been going to and will continue to go to until its no more. I don't think that will be anytime soon. Since 1955 for a reason. 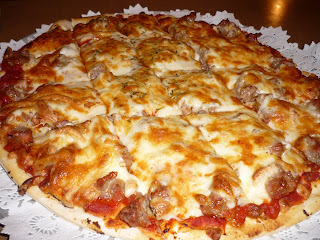 Pie as it arrives 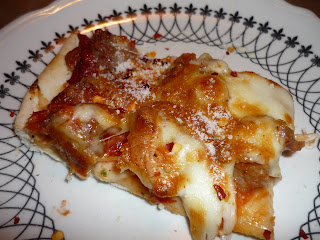 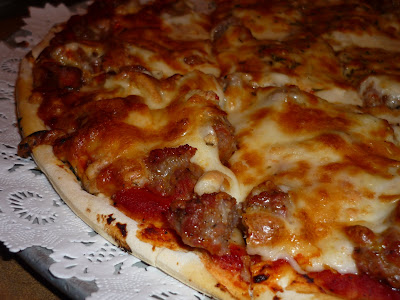 I also had a very a good memory that the Italian beef was better than good and one of my favorites growing up. Wanna learn more? check out the sister site devoted to just the Italian Beef.

Have you ever visited the Quonset Hut in Waukegan? Great pizza, the same for years.

Haven't heard of it but its now on my radar...thanks for the tipper.

I am very happy when these blog posts read because blog post was written in a good manner and write on a good topic. Thanks for sharing valuable information. Feel free to visit my website; 먹튀검증

Excellent Blog! I would like to thank for the efforts you have made in writing this post. I am hoping the same best work from you in the future as well. Feel free to visit my website; 바카라사이트

Hi there to every body, it’s my first go to see of this webpage; this blog carries amazing and genuinely fine data designed for visitors. Feel free to visit my website; 바카라사이트

Thank you for some other informative blog. Where else could I get that type of information written in such an ideal means? I have a mission that I’m just now working on, and I have been at the look out for such information. Feel free to visit my website; 토토사이트