The address of 2580 N. Lincoln ave on the island at Lincoln and Sheffield has been the home to 3 places in the past 25 years. Back when I was a young lad it was the original home of Slat & Pepper or as the neighborhood kids called it S&P. Then when S&P moved across the street it became the Taco Bandito and I remember even as a 10-12 year old that they had great tamales and breakfasts. Then in and around the late 90's opened up the Chicago suburb of Highwood's late-nite institution the Chicago Hoagie Hut. 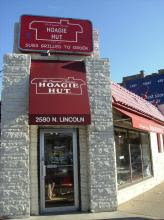 During my glory years of LP bar hopping my go to spot late-nite was the one and only TBP so I hadn't even been to the Hoagie Hut since they first opened a long time until this past year. The building has always housed a grease pit but the Hoagie Hut is the far and away winner for producing the most. Its small and a locals late-nite favorite so it can get pretty loud and greasy in there after midnight. I actually haven't been there when it was a madhouse and never will because its much to deal with without getting in an altercation but one day when I was really hungover and didn't want to travel far I gave it a try for the first time in years. Besides the fact that its a late-nite spot for young drunk kids in the area I'm not really sure what they are. They have hoagies and cheesesteaks and Italian Beef. The term Hoagie originated in Philly and so its kind of like a mixed Chicago/Philly sandwich place. 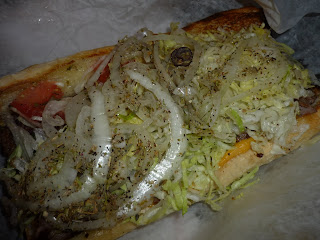 My go to sandwich when I don't want to travel more than a few blocks is the Hoagie Huts "Chicago Style Cheesesteak" which is a piece of ribeye thrown on the grill and chopped down put on a toasted bun and covered with lettuce, tomato, onions, mayo, cheese and oil with a special seasoning that I think makes the sandwich. Its become very fiendish, when I want one I just need that and nothing else. It gets the job done in LP when I'm sober and hungover so I can see why the drunk yuppies love it late at night. 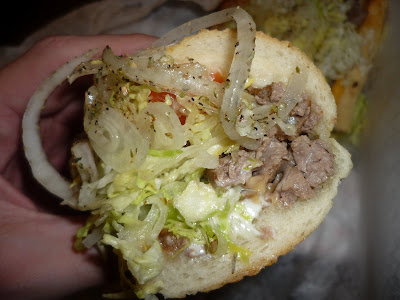 gets the job done where I'm from