I bet alot of people around the world wake up with their worst hangover of the year on March 18th or the day after your local St. Patrick's day parade. In Chicago its always a week long celebration because we got the downtown parade one week and the southside parade the next weekend and not to mention the actual day of March 17th so its a busy week of drinking for all. Its also spring break time and every now and then the weather warms up and makes you want to go outside and hop from bar to bar doing shots of Jameson. Its a fun time but there's always consequences like a hangover that can only be beat a few ways including drinking more, partaking in other vices or eating. What's better than a greasy sandwich for breakfast to soak up all those car bombs, Jameson shots and pints of Guinness?

This is a recipe that I made by mistake. If your doing any type of corned beef dinner for St. Patrick's day and plan on having leftovers then this recipe is for you. Over the winter I had some leftover corned beef from a dinner and was hungry and also happened to have potato's, onions and peppers so I made some CBH according to my recipe. I wanted to try something different so I put the cooked, chopped potatoes, sauteed onions, peppers and diced corned beef in the Cuisinart and blended it for maybe 5 seconds and it turned out looking great for the griddle. 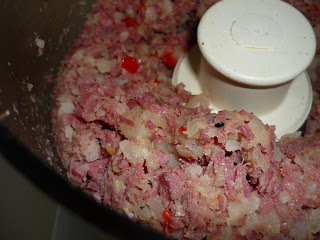 Only problem was I forgot to add the cream so that it would stick together. I decided I would add 1/2 stick of butter chopped down instead of the usual cream. When I blended the mixture the second time it came out looking like corned beef hash from a can. So I formed a patty and decided to create a corned beef hashburger. Trust me, this did not taste like it came from a can. 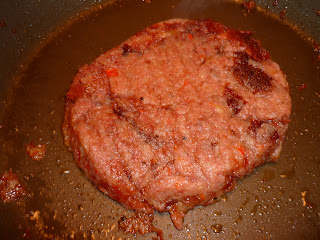 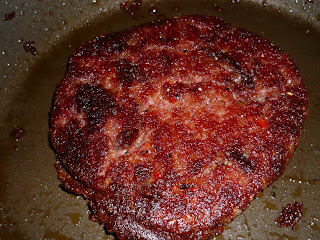 ~Add corned beef, potatoes, onion and peppers and butter into a blender and blend until its consistent with ground beef 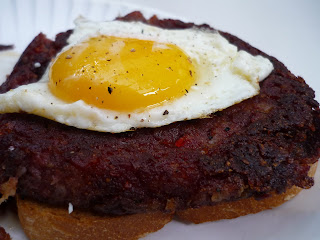 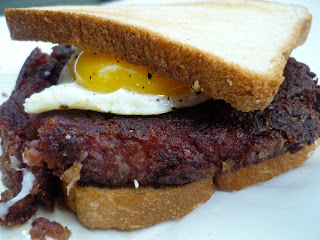 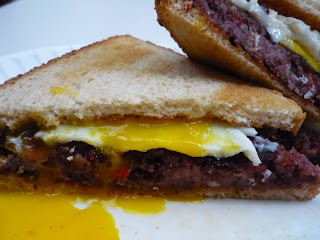 More chibbqking Recipes...
Posted by KingT at 1:09 AM

i have to say..that looks delicioso

Why do you keep putting an apostrophe in potatoes? Potato's WHAT?

You made some really good points there. I looked on the net for more information about the issue and found most people will go along with your views on this site. 파워볼

This is what i call , great article website that i have read . hope i can do same as this 온라인경마

Some truly grand work on behalf of the owner of this website , dead outstanding written content. 슬롯머신

Just bookmarked this blog post as I have found it rather valuable. 토토

You made some really goood points there. I looked on the net for more information about the issue and found most people will go along with your views on tis web site. 토토

I get pleasure from, cause I found just what I used to be having a look for. You’ve ended my four day long hunt! God Bless you man. Have a nice day.
온라인경마
경마사이트

Thanks for a marvelous posting! I truly enjoyed reading it, yyou
might be a great author. I will make sure to bookmark your blog and will come back very soon. 바카라사이트

I want to encourage you conttinue
your great writing, have a nice day! 토토