I think that it's been pretty well documented on here that the food in around downtown Chicago is eh-eh at best. If you want to experience the real tastes of Chicago then your going to have to venture off Michigan ave and State St to find them. Go any direction but East and you'll find gem after gem of real Chicago classics. Sorry but locals don't consider Pizzeria Uno and Big Bowl to be anything but tourist traps. I do however understand that some visitors don't have the time or means to travel to the places that make Chicago one of the best eating cities in the world and believe it or not some people that are local and native to the city even hang out downtown in and around the Viagra triangle. In case you were wondering the Viagra triangle is the name for the geographical triangle that makes up State St. Rush St. and Chicago ave in Chicago's Gold Coast neighborhood and some would consider the bars on Division ave to be part of the triangle atmosphere as well. 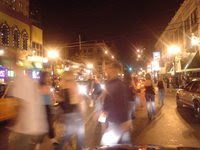 be scene in the triangle

Whats the atmosphere you ask? It's an area abundant with mostly wealthy older men who frequent the local bars by pulling up to valet in sick vehicles, and the "triangle" where State and Rush Streets come together with East Bellevue Street being the base of the triangle, anchored by Gibson's restaurant, the unofficial headquarters. As my good buddy pointed out in entry over at Urban Dictionary "The gentle ecosystem of the Viagra Triangle could not exist without a fully-stocked pond of anxious, and artificially infertile females. Seven years prior she may have been called a "Trixie" in and around Lincoln Park, but with an East Bank membership, a Platinum card of her own, and several upgrades to the base Lexus, she is looking for more while her looks and latest Botox treatment hold out" So guys if your going to the triangle looking to hook up and have a good time, sorry but the chicks in the triangle all require a personal financial statement and proof of an American Express Black card before you can even sit down and talk to them. They're all game if you do so come and get them. 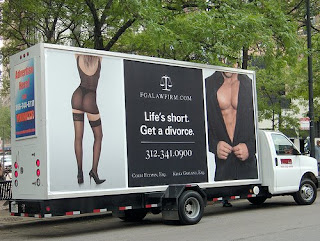 ...and lots of Levitra

Its quite a scene in the triangle on a hot summer day with shoppers and tourists everywhere, people dining along the sidewalk cafes and those just walking around wanting to be seen. It turns into a whole different scene after midnight and I tend to stay away from the area but every now and then I will make a trek down for some drinks and socializing with friends and visitors and engage in chat with the lovely bartenders at every bar. I wont go to half the spots because I wont be that fool who pays $9 for a Guinness and $18 for a sandwich and then before you know it the bill is over $400. Its not that I have a problem spending its just not going to be given to the tourist traps but when in Rome...Dublin's Pub is the Viagra Triangles version of a "dive" bar. I put the quotations because its really anything but a dive bar but its alot less "scene" than the other options in the area. Dublin's is at the corner of State and Maple and is open til 4am 365 days a year. The crowd is a mixed variety as far age and its the bar of choice for industry people in Chicago on Mondays and Tuesdays. 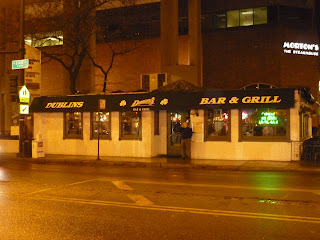 Dublins on a quiet winter night

Dublin's has been a popular hangout for people in the area for a couple of generations now. Its a small cozy place that serves up some of Chicago's best bar food and is a great place in the Gold Coast to get some food and drink and watch a sporting event. However to call it bar food isn't really fair because aside from a few regular bar menu items like burgers and nachos they have quite a menu for a pub. Some of the favorites of regulars are the corned beef and cabbage, the daily homemade soups, burgers are always good, crab cakes, grilled portabella appetizer, lamb kebabs, any and all of the chicken dishes, grilled salmon over salad, pasta dishes such as the house special "Bita's pasta" and so the ladies tell me...the best salads in Chicago. I was introduced to Dublin's by Chicago resident and fellow friend B.W Stalworth who happens to be Chicago's foremost expert on the chicken tender. He also happens to name Dublin's the home of the "best tenders in the world"

B.W describes the perfect most loving tenders as "a real chicken tender, the most tender part at the end of the chicken breast that feels like a babies butt, not a dry tough breast cut into strips, but the actual tender at the end that is then hand battered and fried and tossed in buffalo sauce with love and care" He then goes onto explain that "you see there is only one strip of tender per breast and these days every place will list chicken tenders on the menu but instead serve regular old pre-breaded frozen chicken fingers that might be tossed in sauce or maybe not and served with food industry ranch dressing" Not at Dublin's where B.W "love me tenders" Stalworth has found a home he insists will always be the spot for tenders in the country that made them famous. I have to wholeheartedly agree with B.W and while I hate chicken breast and how boring it is I will always go with tenders those days when I'm watching sports and having a brew at Dublin's with B.W and the crew. The fries are great too and they switch it up by serving waffle fries on some days and thin crispy shoe strings on the others. If your in the area looking for a meal that wont set you back too much then check this place out. I'll give it credit as a great spot to eat and watch the upcoming Madness that is March NCAA basketball. In the end though it still sits in the heart of the triangle and that means that there are no street prices and if you decide to eat and drink and aren't careful your bill could be over $250 real quick. 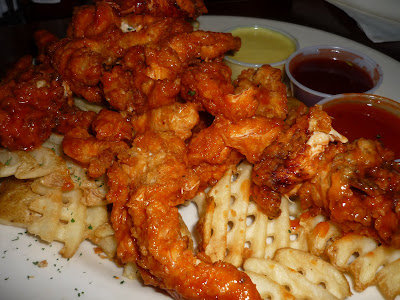 I was a little shocked to see my picture of the "Life's Short" truck in your blog. As a regular reader, I guess I should be flattered.

I want to encourage you conttinue
your great writing, have a nice day! 토토

After I read and listened to the discussion of the article that you made, I found a lot of interesting information that I just found out. 경마사이트

I think this will really help many people with this knowledge that you have shared. success is always for you, yes! 온라인카지노

Hello friends, its great post about tutoring and completely defined, keep it up all the time. 토토