--Got Beef? Italian Beef
as seen on 'What's Your Beef?'

Ever since I decided that I was going to start my own Italian Beef rating site I have found that there are quite a places that I hadn't/haven't been to yet. On a trip this past winter to Katy's Dumpling House in Westmont I drove by Danny's Italian Beef, pasta and pizza in Brookfield. I'm sure that I passed it before but it didn't really hit my radar until I realized I had to stop in and document a beef. If there are going to be any really good beef spots that I haven't been to than they will be in the far suburbs somewhere so if you have any suggestions let me here them. I'm always excited to try a spot that I haven't been to yet hoping it could become an all first team type beef. 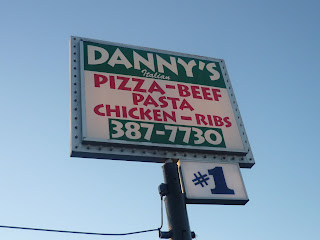 Danny's is a little pizza/beef shack that has a few tables for dining in but seems to do a pretty good business in take-out and delivery. Quite a few people coming in and out when I went in to try the beef. The pizza slices didn't look half bad but those NY style slices aren't really my thing not to say that what they had was real NY pizza. It was just what most people would consider thin crust cut in slices. I was tempted to get a chicken parm sandwich because I felt that this place could do a nice version due to the fact that most of the Italian stuff on the menu is homemade including the beef. I settled on just the beef with hot and was pleasantly surprised when I opened it up despite the fact it was wrapped in tin foil-a big no no. The places that wrap the beefs in tin-foil tend to have very soggy beefs if they aren't opened up within 15 seconds of eating it. Luckily for me I was dining in on the beef and so I dug into a Danny's beef for the first time.

I said it before and I'll say it again-8 out of 10 places that do a homemade beef do it right. Danny's was a pretty good beef and much better than I was expecting otherwise I would of been there a hell of alot sooner. The beef was a little thicker than your most thin sliced beef but still had no rubbery effect whatsoever and decent beef. I thought the best part of the sandwich was the bread which was above average and I liked the highly seasoned gravy. Unfortunately the worst part was real bad and that was the hot peppers. This giardinara clearly came from a bottle that came from the fridge. It wasn't good to begin with but the fact that it was freezing cold made for a beef that would of been much better plain. If Danny's is going to take the time to do everything else right and make most of their dishes in house they might want to start making homemade hot peppers. Otherwise I suggest getting a beef no hot or with sweet...as long as they don't come cold from the fridge. beef with hot from Danny's in Brookfield, IL

Excellent goods from you, man. I have understand your stuff previous to and you are just extremely excellent. 토토사이트

I just couldn’t leave your website before telling you that I truly enjoyed the top quality info you present to your visitors? Will be back again frequently to check up on new posts. 경마

It was my excitement discovering your site last night. I came here now hoping to find out interesting things. I was not dissatisfied. Your ideas for new methods on this subject were useful and an excellent help to myself. 바카라사이트

I have a hard time describing my thoughts on content, but I really felt I should here. Your article is really great. I like the way you wrote this information 토토사이트