Does the topic title of this post ring a bell? If you have lived/live and drank/drink in Lincoln Park then you know what I'm talking about. Its the world famous Taco Burrito Palace #2. This place has seen more drunken fools then the holding cells at an English premiere soccer stadium. Every city has different cuisines on which people indulge after a long night of binge drinking. I know that in Montreal its all about the Deli's with some smoked meat poutine, on the east coast there's diners and in college towns there's usually some garbage pizza place that delivers late-nite. Over here in Chicago there are a few options but Mexican food is the king of late-nite eats. There are thousands and thousands of taquerias that stay open into the wee hours of the night. 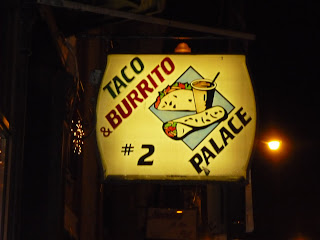 The sign has been the same since the day they opened

I've been eating at TBP for over 15 years. So if you've been eating there as long as I have then you would remember the old Session's skateboard shop across the street at Altgeld and Halsted where The Smoke Shack (eh) sits. I'm not going to sit here and BS you about how this is the best Mexican food in the city or world yada, yada. Although TBP does a good business all day long from the neighbors and hospital it is a different place at nighttime. This is drunk Mexican food at its finest. Now don't get me wrong, the food is totally acceptable during the day and I have eaten here plenty of times when not inebriated. But everyone knows that the show and the cooks are better at night. Its not the best choice if you like your steak tacos like I do but this is good late night eating in LP. So here is another place checked off the board as far as that silly statement that there's "no where to eat in Lincoln Park" goes. 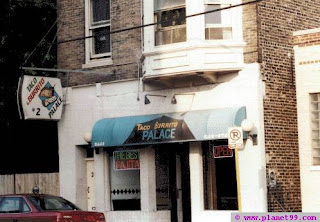 TBP isnt quite the same as it used to be, its rather tame now. Back in the late 90's and early '00's me and my boys used to be pretty well known in the area and TBP and Jonquil park were places we could be found after 2am on any given night. It used to sit a block south right down the street and it was literally a warzone at times. Unlike the Wiener's Circle where its a somewhat friendly albeit disturbing exchange of insults between customer and employee, TBP was a prime spot to see a fight on a Saturday night after 2am. If you wanted to see drunken girls tops and even bottoms come off while eating some tacos? TBP. Did you want comedy better than that being dished out at Second City? TBP. When people ask me what restaurant I have eaten at more than anyplace else I say without hesitation TBP. If you got in a scuffle at TBP back when it was down the block and you don't know me...it was probably me and my friends on the other end. Sorry about your face. Then of course there was that night I dodged the shot of my life when we somehow managed to get in an exchange with three Israeli soldiers or body builders. Do any of you fools reading this remember the mini white sox bat that went crack? those dudes were rock solid and I don't know how we got out virtually unscathed. If anybody that frequented the old spot remembers the booth that had one of the corners missing, it broke that night. Its ok though because we always took care of the crew that runs TBP and they know us really well. We took many smoke breaks with them out back and they basically watched us grow up. Everyone has a TBP story to tell. Now on to the food. 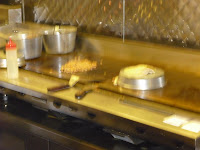 The old taco burrito palace has a Americanized Mexican menu but everything is good and a few things are better than good. I've gone thru different phases of what I order over the years and right now I order the chicken enchiladas suizas every time I'm in there. I haven't found anything better at a real restaurant, there are great enchiladas from a lady at Maxwell St market most Sundays but other than those, TBP's are the best I have had. One thing that has remained a constant in my diet are the homemade tamales. Way back in the day when I was maybe 10 or 11 my dad made me try a tamal from there and I didn't want to but did with hesitation. It was so good I decided Ill never not try anything at least once again. I remember when the owners wife used to sit in the back and make them herself. How times have changed, I doubt she makes them in back anymore, she has her own brand new X5 and the family has a sitdown spot with drinks just down the street called "the Mayan palace". I can assure you however that the tamales are being made the same way. The masa has a different almost wetter texture than most other tamales I have had. The quality can vary though because they don't make them daily so it depends how fresh they are as to how good it will be. 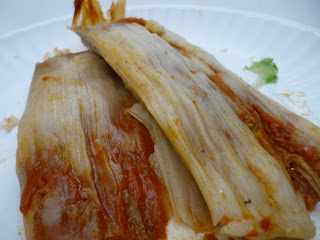 Other menu items that are great choices include the steak nachos, red Rooster style, which is with melted chihuahua cheese instead of the bright orange processed stuff. But here is a little secret Tuens let me in on, its not chihuahua cheese, its muenster. They are very similar in taste and melting capability in case you ever need chihuahua but cant find it. The chips and homemade red salsa are also must gets. Then there is the cheese fries...very, very popular with the ladies. They are fresh cut potato, fried upon ordering and oozing with the orange yellow stuff that kids love. Just another sign that TBP cares about their product even though 70% of the people they serve will yack it back up and not remember a thing the next day, they still make the fries and most everything else on site. The cheese fries are some of the best in the city. Chicken tacos are good if you like the Americanized version loaded with everything as are the big boy quesadillas. Last but not least is their rice. No ones driving out of the way to get rice but if your there, its the best yellow rice I have ever had. Want to try something really good? do up some KingTBP cheese fries and cover your cheese fries with rice. 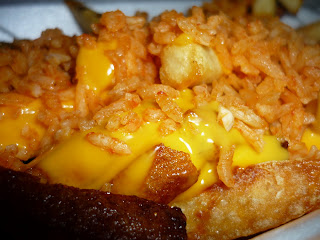 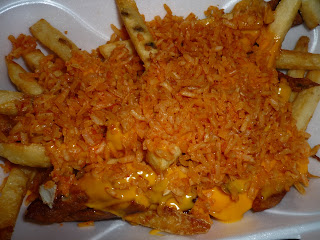 Some of the best around 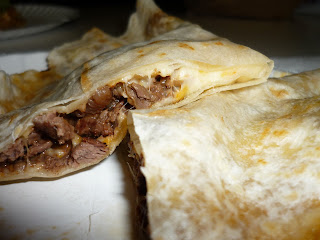 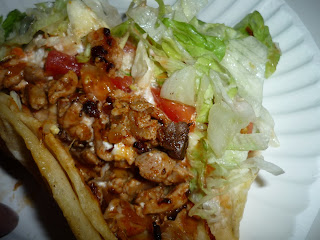 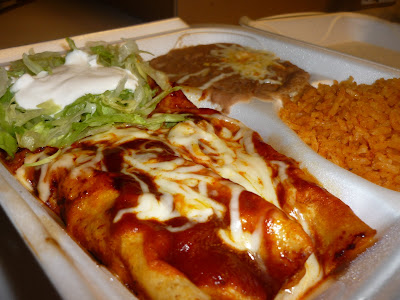 While the days of a spring break atmosphere are long gone as is the old location of TBP, the food, the sign and the good people working there remain the same. But the vibe just isn't the same and that's for better or worse. There is now almost never a line out the door because the new space is much bigger, they have a flatscreen TV for Christsake. There are now both male and female restrooms as opposed to the unisex bathroom you had to walk thru the back kitchen to get too. It was like walking thru Deadwood's meat market with all the cut up meats and animals laying around in a very tightly squeezed kitchen with a bunch of men hawking machetes in a frenzied atmosphere. Those were the days.

Quick Note: I know that TBP isn't exactly Chicago's greatest representation of Mexican food but if not for this place, I wouldn't love Mexican food and know as much about it as I do. If I didn't have TBP, you wouldn't have this site. So show it love.

Those were the days...I think they were Mossad and had been skiing on some slopes..

I have definitely paid with a nugget before and received two beef tacos and a cheese quesadilla with guac in return.