-Grubbing in Chicago
Where the locals (and celeb's) eat.

Chicago is so damn full of notable places to eat that this site will be updated regularly for years and years to come. As long as my heart survives the tour. I haven't had a chance to bring you any of the BBQ around town and I'm not going to have a chance to post about any REAL BBQ this time either. I am a lover of food from around the world and I'm not going to leave out my city's weakness so when it comes to "Chicago style BBQ" its not really BBQ. You see the definition of BBQ is smoked meats and Chicago style ribs never see any flames nor smoke. The ribs are coated with sauce and baked until they fall off the bone. Fans of real BBQ call it "meat jello" and while I know that Chicago style ribs aren't really BBQ, I still like them because I ate them as a kid and they are still ribs. There are a few spots that are well known around town for their Chicago style ribs but Twin Anchors is globally known and has such a great vibe that it gets to go first. 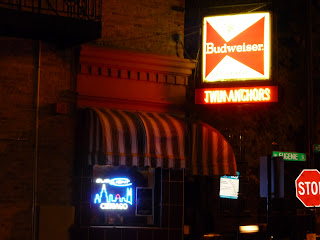 Since as far back as 1910 there has been a tavern operating at the corner of Sedgwick and Eugenie in Chicago's Old Town neighborhood. During some point of world war one, the Schlitz brewing company donated the bar that remains in use to this day. During prohibition a speakeasy known as the "Tante Lee Soft Drinks" provided refreshments for the "thirsty" at this location. So as you can imagine, this place has some stories to tell. The list of famous people that have dined at Twin Anchors is pages and pages long and scenes from "The Dark Knight" were filmed there during filming as well most of the scenes from the movie "Return to Me" with David Duchovny.

The most famous avid fan of Twin Anchors was most likely Frank Sinatra. When Frank was visiting one of his favorite cities on earth he could always be found in booth seven at Twin Anchors dining on his beloved ribs. Mr. Sinatra was a visitor during the 50's, 60's, 70's and 80's and when he wasn't in town he was having the ribs shipped to him on the road across the country. 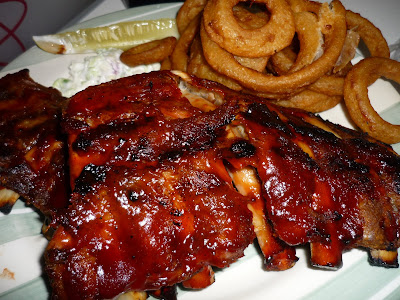 Full slab of ribs with onion rings, pickle and slaw

I am a fan of Twin Anchors and everything that it is. They are by no means the best BBQ ribs in the world but they sure are some of the best when it comes to baked ribs with barbecue flavor. The ribs aren't the only thing on the menu, which is pretty consistent up and down. I enjoy the burgers and love the chili during the winter while sitting at the bar and having a beer and watching some sports. Long story short, Twin anchors is a Chicago tradition dating back eight decades that isn't going anywhere, anytime soon.

"Chicago, Chicago that toddling town
Chicago, Chicago Ill show you around - I love it
Bet your bottom dollar you'll lose the blues in Chicago
The town that Billy Sunday could not shut down

On state street that great street I just want to say
They do things that they don't do on Broadway - say
They have the time the time of their life
I say a man and he danced with his wife
In Chicago, my home town"

My sister lives in Chicago. I'll tell her to check this place out