Its been a while since we brought you tavern style pizza over here so today is as good of a day as ever to do so. Off we go to Pete's Pizza #2 on Montrose in the Portage Park neighborhood. The name Pete's has been associated with pizza in Chicago since 1955 when Uncle Pete opened a pizzeria near Western and Waveland. This location has been around for quite a while itself and both locations are locals favorites for thin crust in the area. 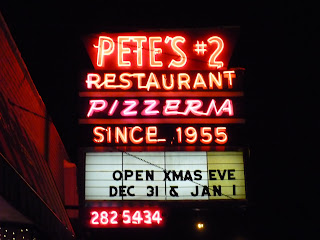 Pete's #2 calls my name with its old school sign

I had never been to this location of Pete's but have been to the original many times though it had been quite a while so it was a good time to get reacquainted. The menu has choices of tavern style thin, stuffed and pan. The clear favorite and best offering on the menu is the thin crust and the Chicago topping of choice-Italian sausage on top of it. Both locations of Pete's are still all in the family and its a real family atmosphere at the Portage park location just like the original. The only difference I can remember in the two is the size of each spot. The original is much bigger while #2 is much cozier. As far as I could tell the pizza is also the same and hasn't changed since I first had it as a youth years ago. The pie was brought out piping hot so beware to not take that first bite right away. 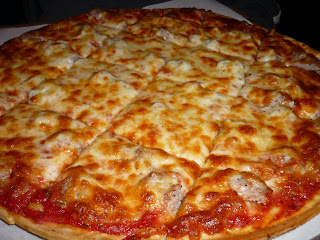 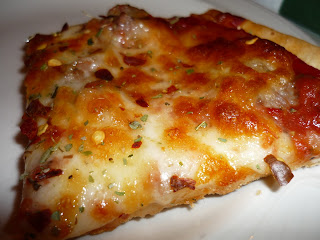 a slice of tavern style thin with sausage from Pete's

This was a very respectable thin crust. I thought the sauce was a little lacking and it was maybe mixed with ricotta and broth or something else because each bite was pretty damn juicy and there was a little more cheese than I would have liked but a good pie none the less. The crust and dough was not nearly as crispy as I prefer, it was a little more of the chewy variety so that cost it some points in my book but its still a place I know I'll be back too. Pete's pizza has been doing it the same way for over 50 years and you cant hate on that. Its all in the family and they do a great job of putting out a tasty consistent product. 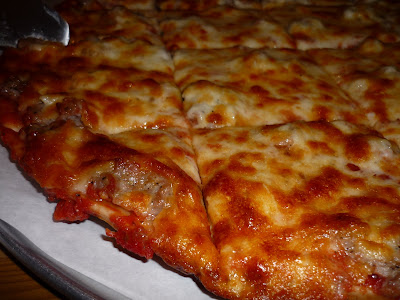