December is here and that means so is soup. I have said it here and elsewhere and I will tell you again, Chicago has the best Mexican food in the world, including Mexico. I know it sounds crazy so let me explain again why I make that claim. You see Mexico, just like in America, has so many different regional variations of eating and Chicago has all those regions tied up into one city. The only Mexican eat's we are missing is a place to get legit fish tacos like those found in Baja, Mexico and San Diego. The climate is a little different up here and when it comes to winter in Chicago, there isn't a more satisfying meal than Carne en su jugo.

Carne en su jugo literally translates to meats in their own juice. I was first made aware of this wonderful soup from a poster at LTHForum. Click the link if you want the best report on CESJ on the internet, its filled with everything you need to know about this wonderful steak soup.

Pigmon explains: "Carne en su jugo consists of beautiful beef consommé peppered with chopped steak, and normally accompanied by bacon and beans, and garnished with the condiments of radish, avocado, raw onion, cilantro and chile de arbol. Being a soup man from way back, this is definitely was my idea of a great dish. I decided that carne en su jugo was worth a bit of research since, strangely enough, I had never noticed it on any menu before in my numerous Northside Mexican dining experiences over the years. Even after my extensive search throughout Chicago for this dish, I was only able to find relatively few examples of this treasure." Another point of emphasis is that it is a dish primarily associated with the Jalisco state of Mexico. 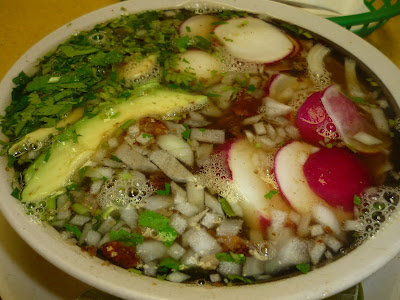 Bowl of CESJ from Los Gallo's

If there is one reason to be happy about winter arriving then CESJ might be it. I have been on a little tour using Pigmon's guide and have found a few that really stand out from the rest. There are a few locations of Los Gallos Taqueria around the city but I have found the CESJ at the Archer ave location to be my favorite. The broth is clear and has a real clean flavor and the steak is grilled and then added to the soup as opposed to poached. The bacon is also added last so that it has some crispiness to it...hmmm. 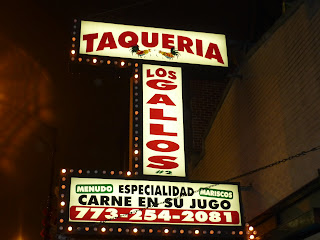 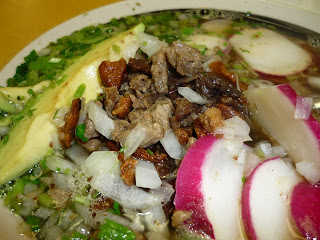 Close up of steak and soup (click for extreme close-up)

I'm a big fan of soups and for a while there, New England clam chowder was my favorite. When I was a kid and we would travel to N.E it was clam chowder that I would get most excited about. If I were to ever leave Chicago for a significant amount of time and I came back to visit in the winter, CESJ would be my first meal. It is the first thing I take people to eat when they want to go get something in the dead of winter. I will bring you some other pictures and reports from a few other spots later this month and thru the winter. Now get out and try some.

This blog is the greatest! Thanks, Ryan