Grubbing in Chicago
Where the locals (and gangsta's) eat.
--The burgers (and sandwiches) of Chi 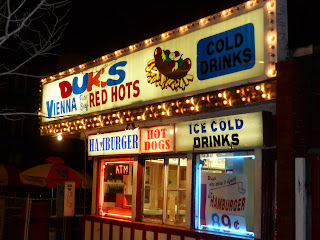 Have you ever driven down Ashland ave at night and come across a very vibrant little hot dog stand that looks likes its straight out of Coney Island or the carnival? Duk's Hot dogs, formerly Donald Duk's, has been around Chicago since 1954 and was was once a booming operation. There was a time when there were a few different locations of Duk's including one on Clark St. in Andersonville that I used to hit up with my friends in grade school as well as four more that were in the work's until Mickey Mouse got involved. I want to say it was around the late' 80's or early 90's when the people at Disney got involved and crushed a dream like big time conglomerates like to do if they aren't getting a piece of the action. Disney sued Donald Duk's saying that the hot dog stand had infringed on one of their beloved trademark's-Donald Duck. The Disney corporation seeked unspecified damages and the original owners of Duk's couldn't afford the fight and removed the name and signs. They had a funny looking Duck somewhat similar to Donald that would be holding hot dogs on that sign to the best of my memory. The owner called it Donald Duk's after himself, Mervyn Dukatte and his cousin, Donald Marselle, as time passed all of the locations faded except for the outlet on Ashland. I guess that old saying that not all bad press is bad for business didn't work in their case. 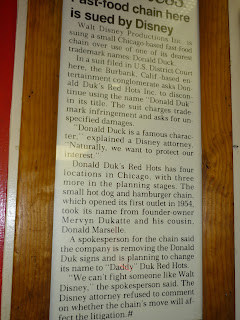 Click picture for the full story behind Disney and Duk's

Duk's is a 24 hour grease pit that has been in its current location for ages. When you drive by during the day it is obvious that it is a old run down beat up place and when you go by at night it looks like the carnival with all the lights flashing and inside is about as well kept as the outside. I've been going to this Duk's now and then since I got my license and 98% of the trips are after midnight. There was a time when this neighborhood was real bad and nothing more than a gangland. I'm not here to sugarcoat you about hyped up POS burger joints like The Counter.

I bring you real Chicago and this is a place where the gangsta's eat...not the Gangster's but the gangbangers. Any grease pit that's open 24/7 in a less than desirable neighborhood is going to attract its fair share of hoodrat's. Just let me say that the ladies that work there are absolutely wonderful and as nice and happy as can be. Maybe they can tell you the stories of ducking under the counter when stray bullets would fly through the windows on multiple occasions or the time they saw a gang member get slain while leaving with his double cheeseburger and custard. The neighborhood isn't nearly as bad as it was in the 80's and 90's but its still a 24 hour joint on a quiet corner where there isn't many people so be cautious but not scared because I have never had a problem and I'm only there late nite. Now onto the food. 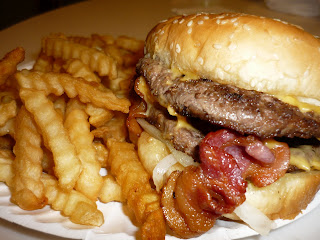 If your eating at Duk's then your most likely inebriated or distorted and its most likely during the wee hours of the morning so order what you feel like but do be aware of the fried tacos and don't say I didn't warn you if you do decide to try one. Its the definition of a Chicago grease pit as far as the menu goes. It features hot dogs, burgers, Italian Beef, Polish, breakfast sandwiches, chili, tamales, breakfast items like pancakes, bacon and sausage and their crinkle cut cheese fries. During summertime their custard is very popular and the most popular menu item may be their 89 cent junior cheeseburgers. There was a time when I enjoyed these McDonald's like 30's style cheeseburgers but now I just go for breakfast sandwiches. One thing they do amazing at Duk's is bacon, on most nights the cooks will fry the bacon extra crispy. How can you beat a bacon, egg and cheese for under $2 at 3am? 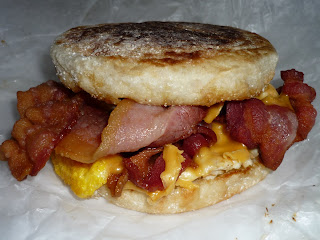 Duk's has some tasty breakfast sandwiches at 3a

Even though its pronounced Duk's me and my friends call it Duke's for whatever reason. I thought this post was appropriate because I can remember two or three different occasions on new years eve when I was stranded on Ashland ave. at 4 in the morning in the freezing cold walking endlessly with my friends looking for a taxi and stopping at Duk's for our first meal of the new year to warm up and hopefully find one. Please don't be afraid to go here, the Ukrainian Village neighborhood is an up and coming place to live with great citizens as residents. I don't see people scared to go eat at the tourist trap Chicago Pizza and Oven Grinder and it was on the opposite end of where the St. Valentine's day massacre occurred. Its all a part of Chicago's history. Plenty more to come. Even though I think its totally an amateurs night out, happy new years and don't think its a given you'll be getting a cab...I never do.

Strengths: It does the job after a long night of boozing and anything with bacon is going to have some flavor.

Weakness: I'm not to fond of the frozen patties that they use to make their cheeseburgers with or frozen patties period. It is by no means Chicago's best burger but like I said above...it gets the job done late night.

Brings back memories. I haven't been to Duk's in ages.

he who scoffs at danger said...

the truly seedy one is on ashland and blackhawk by the kmart.

the redeeming point about duks is that everything goes into the fry basket.

i don't know if that's "authentic chicago style". in fact, i know it's not - that just appears to be something suburban/tourists who find themselves in a dark corner of a city say about any divey place they end up at after midnight.

i do know that's the way i like it: a deep-fried polish with deep-fried bacon and synthetic cheese sauce for under five bucks, please!

Used to love the pizza puff and polish at Duk's when I hung in the neighborhood, love to go back when I'm around there after midnight.

Is this the only one left?