Eating Like a Local: Regional Food Specialties
--beer and brats in Wisconsin
When it comes to regional food specialties, Wisconsin has as many as anybody. You can be sure to expect all sorts of the cheese state's eats to be covered on my site. However since there are so many, we have to have a few different articles. So in honor of October-first up is beer, brats and pie.

Today we are going to focus on Southeast Wisconsin and their lust for beer, brats, beer-brats and pie. The brat is the official food of tailgating in WI and to wash it down you better have some good beer to pair with it, when it comes to food and beverage pairing is there anything better than a brat and beer? how about a California roll with some sake? MUHAHAHA.

Our first stop on the journey is an old classic that can be reached en route to Milwaukee, where it sits along I-94 in Kenosha, WI. The brat stop (pictured above) has been around since the early '60s and has turned into a behemoth of a bar that has grown in size times ten. If your going to call yourself the brat stop you know you got a good brat, the all pork regular brats are made to the original recipe in Silver Creek Wisconsin, the rest are supplied by Usinger's, the states main supplier. The key to ordering a brat when at the stop is to make sure that you order your brat at the bar when it is not too busy. The difference is at the bar they cook the brats on a grill under real charcoal, where as to when you order a brat combo/plate for sit down, they are cooked under a broiler. 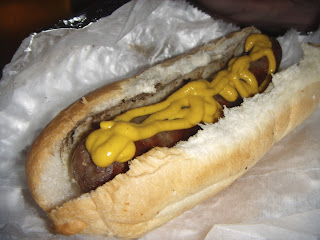 a brat from the bar at brat stop (Kenosha, WI)

Further up the map is Sheboygan, a small town that rests on Lake Michigan and happens to be the"Bratwurst capitol of America." There are so many many places to get brats in Sheboygan but I have two places you need to try. If your looking to buy fresh made brats to tailgate with or bring home than you need to go to Meisfelds, this is the ultimate tailgate market, it will get its own feature one day. It is Meisfields who supplies the Charcoal Inn with their brats. Whats Charcoal Inn? one of my favorite roadfood stands in the land.

Charcoal Inn butterfly's their brat's and cooks them on a charcoal grill, when done they are placed on a brat roll (another local specialty) from the bakery down the street and loaded up with mustard, onions, pickles and a insane amount of butter.

The first time I ever went here I ordered my brat with just mustard and onions. When they brought it out I looked at the amazing sandwich and thought they put a huge glop of mayonnaise on it. After a quick lick I realized it was just about a half cup of butter...mmmmmmm. Its my belief that I dont need to try any other places brats, these things just melt in your mouth and it doesnt get any better than Charcoal inn, maybe in brat heaven but not anywhere else. 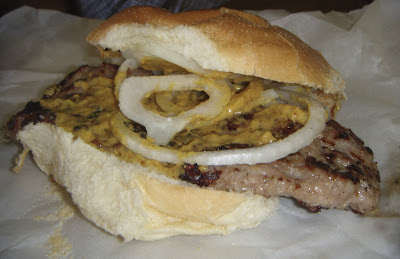 One of America's "must eat" sandwiches- a brat from Charcoal Inn

All these brats need to be washed down with some brewski's and if you are using Johnsonville brats your probably drinking miller lite with them. Im here to not only tell you where to get real brats but what real beer should taste like. For as many sausage purveyors as Wisconsin has, it has more brewers. The state is rich in beer tradition and good local brew is abundant throughout the state. I lived there and have spent plenty of time drinking through the offering's and the king of Beer is not Budweiser, its not even Miller and its not Leinenkugel's. The best beer that I have consumed comes from New Glarus brewery located in "Americas little Switzerland" New Glarus, Wisconsin. In 1995 and 1999, the New Glarus Brewing Company was named one of the World's Ten Best Breweries at the World Brewery Championship. The competition involved more than three hundred breweries from 28 countries who submitted over 700 beers. Recently they were named mid-size Brewery of the Year in '05 and '06 at the Great American Beer Fest.

Unfortunately they have trouble meeting demand for the state of Wisconsin and it is not shipped outside the state. Spotted cow is their most popular brew and one of the many variety's I really enjoy. You can get all sorts of their offerings at the Woodman's in Kenosha or the brat stop in the gift section and all over bars/liquor stores in Wisconsin. 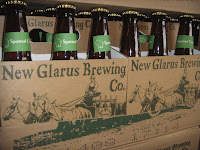 Spotted cow might be the most refreshing beer in the world

Capitol Brewery's Autumnal Fire is another WI classic.
Available for a limited time at maproom in bucktown

Im not big on dessert but the southern part of Wisconsin and the Door County area are famous for their fruit pies. Its hard to take a trip up to Door County over the summer and not indulge in some pie, its a Wisconsin birthright that we FIB's like to adopt. There are so many places in the area to get fresh baked pie that you need to just stumble upon a place while in the area and you wont be disappointed. So now that you know about the beer, brats and pie and the fact you can expect my future reports on custard, cheese, sausage, more beer, butter burgers, kringle, fish Fry's and fish boils, its easy to see why the men are large and all the hot blonde's are nice and thick in a good way up there in Wisconsin. I got love for that state, they eat great. Your favorite FIB, T. 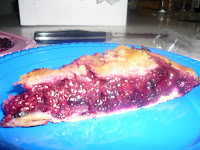 a slice of mixed berries from Door County pie Co.

I second your thoughts on New Glarus. I sampled it for the first time this past summer and Spotted Cow immediately became my favorite beer. I've been able to scam three separate deliveries since then. Top notch.

Who knows where to download XRumer 5.0 Palladium?
Help, please. All recommend this program to effectively advertise on the Internet, this is the best program!