What sucks worse...Jewel or Dominicks?

Got ya! trick question, they both SUCK.

I stopped shopping at both these places a long time ago. When I go in to their shit stores, I feel like their mocking me with their quality selection and prices. In fact I have my own vendetta against these behemoth wastes of space that its one of my goal's in life to push them out so they never return. Anybody that thinks these places are legitimate grocery stores has never been to a Woodman's or Wegman's. I expect to see supermarkets with the selection of jewel's in the middle of some small shit town in Indiana...not Chicago.

I had found Woodman's during my day's in Madison and after my first visit I knew exactly what a SUPER market should be like.

Now I know that in Chicago we are blessed with all of are locally owned different ethnic grocery spots but some days I just feel cursed that we also have Dominick's and da jewel's as our main suppliers. Why do they think I should believe there is only one brand product of every item and the price is a "savings"...its not a savings even with the preferred card. All I will say about the meat is that its overpriced and belongs in a school cafeteria.

Rant coming...Im at Woodman's and I get 4 lb's of fresh made Usinger's brats for $6.99. At jewels they have inferior product for double that.

Jewel has a small case of bad cheese selection, Woodman's has its own aisle for cheese spreads!

Jewel has French's and maybe one other selection of mustard, Woodman's has more selection of mustard than you thought existed. Same for pizza...ever seen the frozen pizza selection at Woodman's? With the never ending aisle and bright lights, for just s second there I thought I was Brian Stal and died and went to heaven.

Jewel has these self checkout machines that drive you crazy...Woodman's has charge free ATMs.

Jewel has all the "local" regional family owned brands like Uno's pizza and Vienna dog's (WOW!)...Woodman's has pasties from Stella's in the UP, Kringle's from all sorts of places in Racine.

Hey c'mon your being unfair, Dominick's has Tom-Tom tamale's BUT so does Woodman's. In fact Woodman's has a better giardinara selection than all the jewels and Dominick's outlets combined. Better prices too.

Jewel has coca-cola, pepsi, sprite, mountain dew, mostly all can's...Woodman's has all sorts of regional bottled pop including 4 packs of Sioux city root beer for $1.99.

To be continued...as long as Jewels and Dominick's dominate the area. 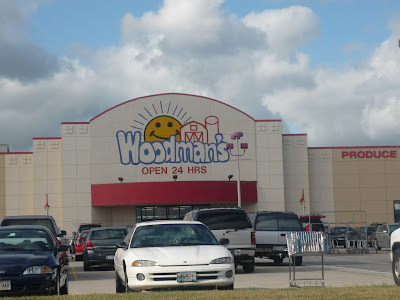 Woodmans is obscene. So glad we have on in N Aurora. They sell great name brands less than aldi does for their own sucky house brands. When family comes in from out of town they are amazed. The only knock on them is the deli.