Chicago is famous for for its street food-hot dog's, Polish's, pizza, Italian beef and gyros are a few. Its yee-roos not gy-ro or guy-ro or girro that were going to focus on today. Find me another place in the country with more gyro vendors than Chicago...impossible. From the restaurants in Greektown to the the hot dog stands in the western suburbs, you'll find gyros everywhere, making them hugely popular in Chicago. Hell so many places need gyro's meat that we have at least four different gyro cone suppliers in Chicago. Kronos, Grecian Delight, Olympic, Devanco and im pretty sure there is a fifth one all supply restaurants with their demand for beef and lamb.

Most places use a preformed cone from one of the suppliers mentioned above so alot of what goes into making a good gyro is the love put into it by the place serving them. Gyros need to be sliced thin and allowed to crisp on the outside so edges are crispy and the plate needs to be piled high with meat. The toppings of onions and tomatoes need to be fresh and the pita soft and warm. The tzatziki sauce better not be watered down yogurt. A personal favorite of mine is wrapping a fry with a slice of gyro so the fries also play a roll. Some places go the extra mile and still make theirs homemade but not that many of them are left. The suppliers do a nice job of getting the right blends of meat and spices, so its on the vendors to do the rest. 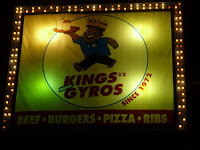 First stop on my Chicago gyro-tron is King's gyros #2 (no affiliation with me) on Milwaukee and Foster. Kings has been slanging their gyro plates and homemade fries and onion rings in the Chi since 1972. Like most of Chicago's roadfood joints its clientèle is very broad and due to its late night hours its very popular after dark. If your going to eat gyros there is no sense in ordering just the sandwich, always order a gyro plate, its the best bang for your buck. Kings does a above average gyro and makes the fries and onion rings fresh so its in my rotation if I am in the area. As the years go on expect to see many different gyros spots reviewed with a few secrets spilled of where to get the absolute best. 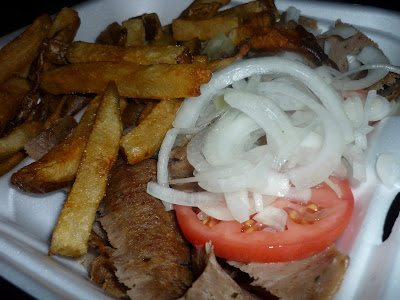 Make sure you try he hand cut Fries and homemade Onion Rings!
The rings are simoply FAB!!!!