In a recent survey issued by Eater Chicago I named Chinatown the best dining neighborhood of 2018. I couldn't think of another area where there seems to be an exciting opening every month. Towards the tail end of 2018 I was made aware of a new tenant in the Richland Center Basement. The dark and cold space is home to the city's best food incubator. Mike Sula of the Reader was first on the scene of this new stall featuring a plethora of handmade noodle dishes. It's called Shan Shaan Taste. 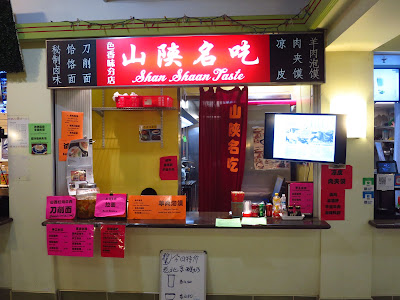 Newly Opened in the Richland Center Basement in Chinatown

One of the reasons I named Chinatown as the most exciting dining neighborhood is it's sudden boom of specialists. Places where they're specializing in a regional cuisine or even better singular dishes. As I learned in the Reader article by Mike Sula Shan Shaan Taste is run by a Chicago restaurant industry veteran named Richard Zhou. After many a stints at different Chicago area restaurants as well as a stand inside a Chinatown grocery shop Zhou has ventured off on his own into the damp Richland Center basement. He's the latest tenant bringing in the crowds of young locals who know some of the best food in the neighborhood is found in this food court. Zhou is hoping to hit it big with the cuisine of his homeland - the Shaanxi province in northwestern China. Food from Xi'an (the capitol city) is having a moment right now and Zhou is looking to further expand into regional chain status. 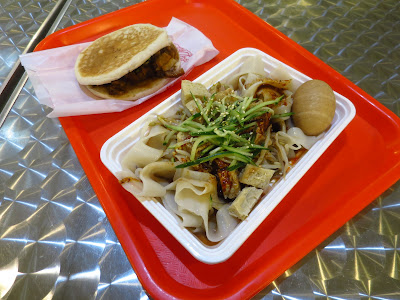 If you want to hit it big and then go the franchise route you need a signature offering. At Shan Shaan Taste that dish is a cold noodle salad called Liangpi. Also called cold skin noodles you can get the compete details on the making of this dish in the Reader article. It's not easy and thus it's probably not something you're familiar with unless you've ate alot of Shaanxi cuisine. The housemade noodles are the star of this dish which also includes "cucumber, sour black vinegar, raw garlic, sesame seeds, soy sauce, and a chile oil spiked with ten spices and herbs that he cooks at a gradually increasing temperature for an hour." I've had them twice and I really like the freshness of the dish as a whole. It's going to be a great snack on a hot summer day. The perfect lunch when paired with one of Zhou's housemade Chinese hamburgers aka Roujiamo. Some say this popular Xi'an snack is the original sandwich of the culinary world. The direct translation of Roujiamo is "meat in a bun" and that's pretty much what it is. I haven't ate a ton of these but Shan Shaan makes a fantastic one with some of the most succulent pork belly I can remember having. I loved the heavy sprinkle of green onion inside. You can get an order of the Liangpi and one Roujiamo of your choice for just $10. 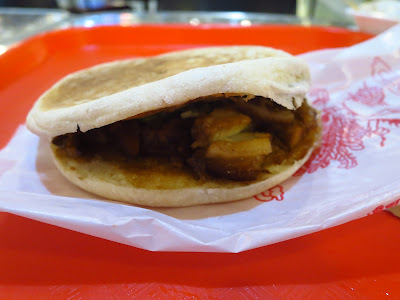 There's a handful of other offerings of fresh noodle dishes. One of them being a very nice bowl of beef noodle soup. While the broth itself is a very mild one, is this a thing in Shaanxi cooking? - The beef itself is full of flavor and tender enough to easily apart when poked with a chopstick. The housemade wavy noodles have a pretty good texture. Next time I think I'll try the noodles stir fried with some of that pork belly if it's an option. Bc Chinatown continues to grow with Chinese people and businesses there's specials on a board that are written in Chinese. As they're clearly catering to that type of clientele. If you've never heard of the WayGo app you may want to download it bc it will tell you what those specials are with a simple picture taken from your phone. I hope Shan Shaan Taste gets the traffic it takes to move out into it's own brick and mortar. It deserves good things for being the latest place to show just how deep China's regional cuisine goes. I wish them much success in 2019. 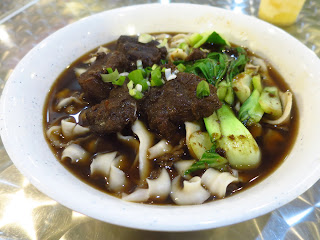 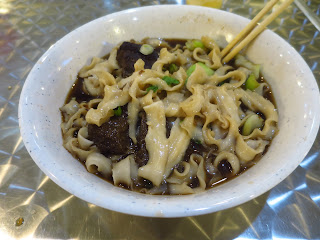 All the things you have written in your post, you have understood all things very well and correctly, your post is also good to see and it is also good to read. You keep writing similar beautiful posts in your life. I wish .
Female Escorts in Gurugram
Gurugram escorts

i like your comment very much, keep share us like this. you are such a nice person thanks for givings us knowladgable thingsFemale Escort Gurugram
Gurgaon Call Girls
Gurgaon Female Escorts
Call Girls Gurugram
Beauty Call Girls