I have another lesser known spot to share here. I'm not sure how I first found Mamina Kuhinja but I think I was stopped at a red light on Clark street and I saw it. As I always do when a place intrigues me I looked it up on google. Not to my surprise there are no reviews on Yelp. That said there's close to 30 on google. Further proof that yelp's best days are behind it. That said most of the reviews on google are as simple as "Great Serbian food" but it's the pictures on there that are valuable. I saw stuff like burek and cevapi and decided that the homemade Serbian food served there was worth a try. 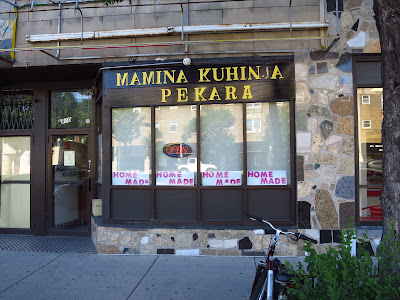 Walking into Mamina Kuhinja is somewhat intimidating do to the fact you cant see inside from outside. They have drapes covering the windows. After walking in you'll get the sense that most people do takeout from here as there's only one or two tables. I noticed quite a few people had called in for pickup orders. All of them speaking in native tongue when they entered. After about a minute wait for someone to acknowledge me an older lady popped out from behind the closed doors to help me. She must've been the owner / cook bc she was the only person working there. I'm guessing she cooks up a few different Serbian specialties each day. No menu so she told me what was available that day. An order of Musaka was what she suggested. I said sure as I was aware of the Serbian take on the Greek classic known as Moussaka. The Serbs make theirs with potatoes instead of eggplant making it a real meat and potato type dish. Another sign all orders lead to carry out is that the food comes in plastic carryout containers. This version of musaka was slightly different than what I had envisioned do to the fact it was served loose rather than layered. Flavor wise I don't think this changed anything. It was still ground beef mixed with potatoes, onions, and probably eggs and some sort of cream and or cheese. It was an Eastern European version of Shepard's Pie. What's not to like? 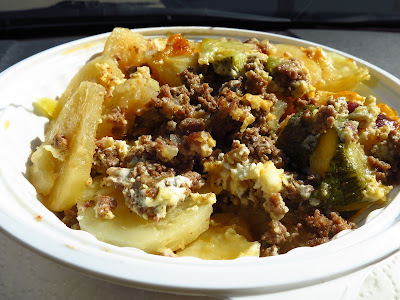