Unlike the last couple of spots we visited today's place has received plenty of press. That will happen when you open up a specialty chicken wing shop in Logan Square. Landbirds flew onto the scene right at the end of 2018. I noticed them right away as I drive down the stretch of California that they're on daily. I was there during the first week and within a few weeks after that so was everyone else. Including all of those in Chicago food media. Word traveled fast with these. Landbirds is the brainchild of a local Chicagoan who grew up eating at Great Seas on Montrose amongst other spots. 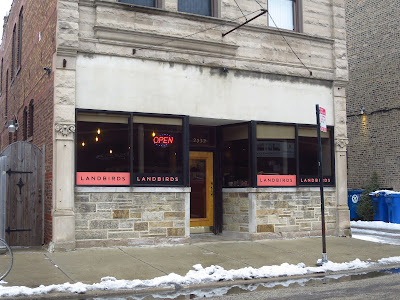 Eddie Lee is a first time restaurant owner. Instead of overwhelming both himself and the staff he decided to curate a menu that consisted of what's basically two items. Landbirds is an ode to the Korean lollipop wings he grew up eating. For those unfamiliar with Great Seas in Albany Park it's one of the city's biggest one hit wonders. I call it that bc despite a pretty large menu there's basically one thing that everyone is there for and those are their sweet and spicy Korean style lollipop wings. Landbirds also has a Musubi fried rice aka spam fried rice. It's offered on a couple different spice levels.  I noticed some hints of kimchi in my order requested spicy. Nicely cooked, this hit the spot. 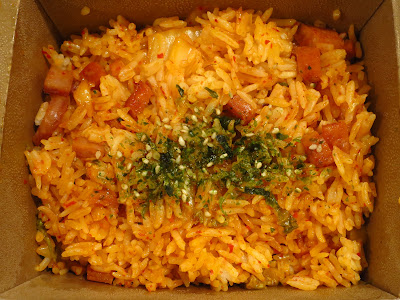 But the reason the hype here was early and often is the wings. Eddie and his team cut them up lollipop style which makes each one essentially the same. They're basically mini three bite drumsticks. There's quite a few spots doing these across the country these days but places like the aforementioned Great Seas have developed generations of fans for their sweet and spicy wings. Though for whatever reason a spinoff location from a relative recently closed in Pilsen. Landbirds offers their lollipop wings in orders of 6, 12, and trays of 72 - perfect for the upcoming Super Bowl. 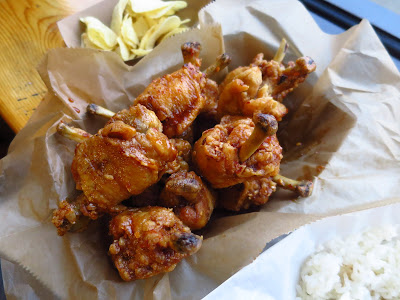 The goal was to create a sauce that's even more delicious than the ones Eddie grew up with. The result isn't far off from what he wanted. These wings are big and plump and fried to perfection. That enough makes them desirable but when the special sauce goes on they become just that - special. Some people have noted the price being a higher than other wing spots but these wings require a little bit of prep work as does the making of the sauce. You have to appreciate the fact they're not coming directly from a freezer and what not. Good food costs more to make. It's just that simple. You can get an order of white rice or Korean style butter flavored potato chips with your wings. I like the rice bc you can use it to soak up the little pool of sauce from the wings. It's no coincidence to see a spot specializing in something doing that said something so well. I hope this practice can become a trend. 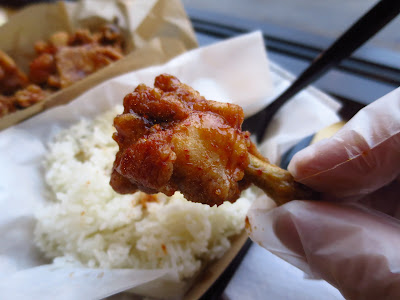 Close-Up of the Wings at Landbirds