It's the holiday season for some and for these people having a merry old time while flying high I've got a few fried items to make you drool. We're taking a different approach this April 20th then we have in the past when fries were featured. Today were going the way of fried food fun. Not just here in Chicagoland but a few other places too. All from previously featured spots here on S'C'&C which should give you the clue that I frequent these places, thus making them chibbqking favorites. I cant get enough of what they got. Lets hit the spots.
________________________________________

Regularly featured in different specials such as this, Toons remains on top of its game unlike it's neighbors who reside over at Wrigley. Whether it's one of their handful of special parties they put on where they do up real Nawlins style crawfish boils or authentic southern pig roasts and now to go with those, their soon to be famous 'Wing (Chicken) Fling' or just a Tuesday night where you wanna grab a beer and watch the Blackhawks and eat some of the city's best wings, Toons makes for great hosts and the type of local haunt everyone should want. Stop by and say hi. 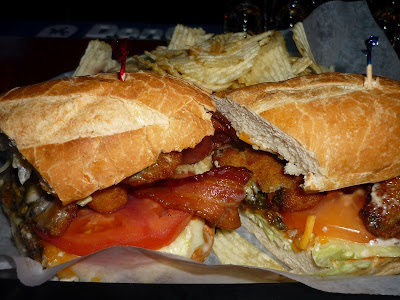 How nice it is to have a real deal cocktail lounge in the middle of Lincoln Park. It hasn't even been a year but the BF has transitioned in nicely and is easily the best drinking establishment if what your looking for is expertly crafted cocktails and conversation with friends. Both the bar downstairs and the lounge upstairs have different vibes but it's impossible for me to pick which is better. The kitchen is right there with the mixologists in many of their offerings and you can be sure to expect a full feature on food soon. In the meantime let me show you what ya missed this year but shouldn't the next time around. 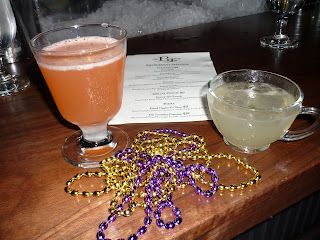 Fat Tuesday at The Flat 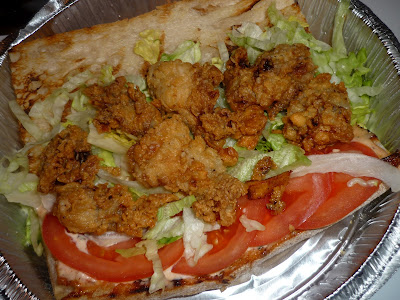 Another one of my favorites especially for food and drink. I like to try and come in later in the evening when they do half off oysters at the bar (After 10p I believe, call and ask). Usually after the dinner rush its pretty easy to find a seat there and when you do, make sure you get a few of their fried oyster po' boy sliders. They take a plump fresh fried oyster and top it with kimchi and peanuts. Not a steal at $4 per but so good you cant help but to have a few. 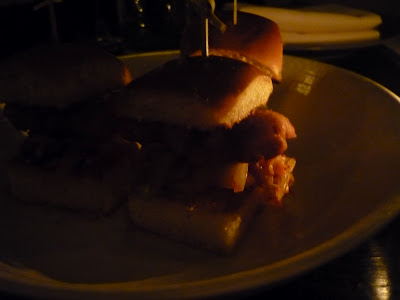 Ah yes Rip's down in Lasalle County Illinois aka Fried Chicken Country. Everyone that lives down in the Illinois River Valley region has a spot they love but the one place people from all over travel to is Rip's. One of the top five viewed threads on this site it comes up daily on the results and people who search the internet for it come from all over the globe. Many of them make the journey down there (about 2 hours from Chicago) and as Rip's slogan goes "We're worth the Wait". That's because its so popular here that there's almost always a line, no matter what time. That's why they offer a few things as in fried chicken, dark or white meat and fried mushrooms too. That's it, that's their menu unless sometimes they have fried wings on special days and fish too. It's near Starved Rock State Park (one of the states best) so make a day of it. 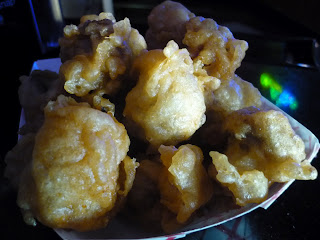 Rip's Fried Shrooms, the best I know of... 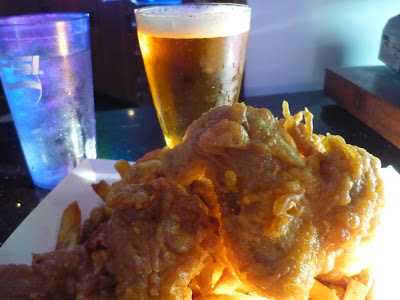 Rip's Chicken Wings are fantastic, what else would you expect? 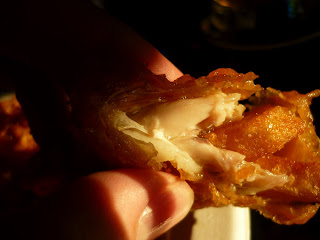 Another place I have a hard time passing by when head in it's direction North towards Wisconsin. Captain Porky's was originally on Sheridan Road in Zion but they got so big they moved shop over onto US 41 in Wadsworth right next to the family's other business 'The Shanty'. Dino still fry's pretty much everything to perfection and has great bbq too. Even the clam strips are plumper and better than most any other places I've had and I'm pretty sure these are usually just bought frozen, but for whatever reason they don't taste that way here. 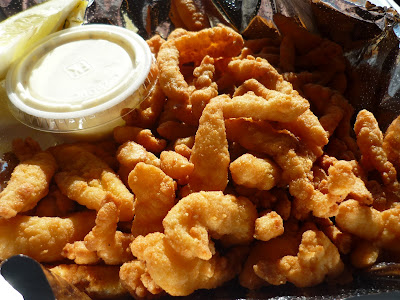 If I'm ever on Highway 94 crossing into Wisconsin it's almost impossible not to stop for a brat at The Brat Stop. I think they might of been in as many of these little chibbqking specials as any other place and that wont stop as I sometimes need more than just a brat from the bar. Take for example their fried chicken dinner which I had one visit I cant remember but I do remember it being damn good and a steal of a deal. It was fried fresh and worth all the cholesterol that came with it which isn't the case for many (Northern) fried chicken joints these days. Oh yeah and the fried mushrooms are ok although I'd like to see better when River Valley Ranch is down the road and they can fry a bird nicely and have a bunch of beer on tap, so why go pre-frozen with these? 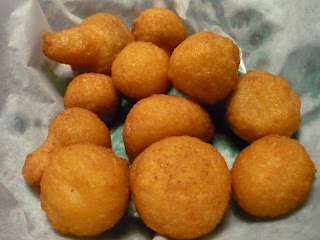 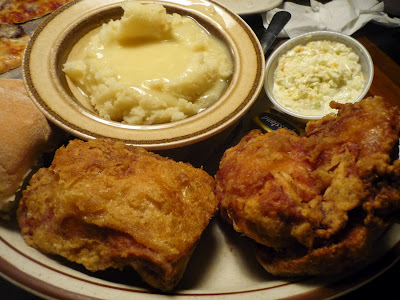 One of my favorite restaurants when I was at college in Madison I still try and get back here whenever I visit Mad City which I like to do a couple times a year when I can. On a visit this last summer we tried some wings to go along with the other usual suspects such as the fried oyster po' boy and Deb's BBQ shrimp. It's real deal Cajun in a college town in the cheese and beer state. 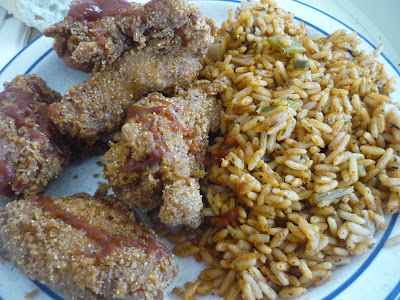 Since it's a short ride and there' can be parking after 8p on weekdays I still get to Del Seoul often. Especially when I'm craving fish and or shrimp tacos. They might not be totally authentic Baja style tacos but both offerings are as good of any of their kind your going to find, especially in these parts. They re-did the fish taco at some point and now it's fried fresh, so the wait is worth it as you can see in the picture below. It tastes better than it looks and I think shes a thing of beauty. Best fish taco to my knowledge although I'm always searching. Do stay tuned. 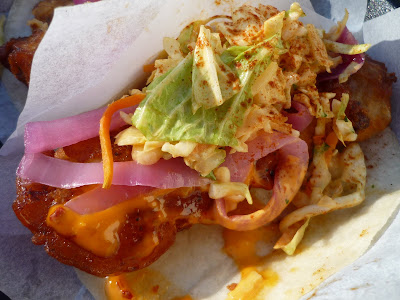 Another one of the places that's been in quite a few specials here on the site after it was featured. Since I made my first post on B&L's they have gotten so popular that they had to move down the block to a bigger place where they now have more space but still lines at the prime times. I love how they have the specials board that switches up now and then and when it does I like sometimes can veer away from the fish and chips for things such as this fried softshell crab taco. 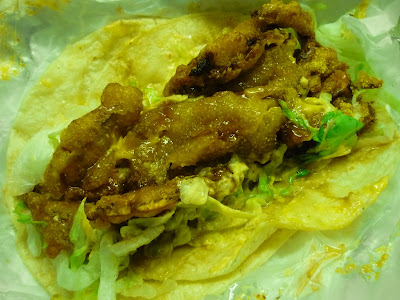 If I'm rolling back from somewhere south and taking Lakeshore Drive to do so, sometimes a stop at BJ's is necessary for me. I recently found out that along with their mustard fried catfish and peach cobbler, they do up a really nice set of fries shrimp. The cornmeal batter is a little different than most Chicago style shrimp shacks do and they give you a big old plateful for a very nice price. If you ever see it special, run with it. 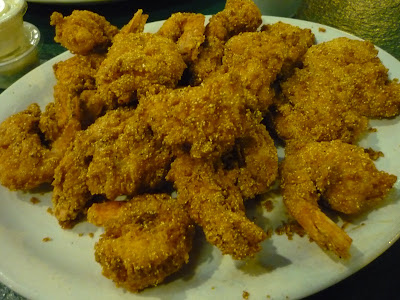 Both 35th Street Red Hots in Bridgeport as well as Red Hot Ranch on Western avenue just south of Fullerton are my most frequented hot dog stops in the city. I'm from the old school minimalist camp aka Natural casing Vienna Beef hot dog from the steamer on a regular old fashioned bun with just mustard, onions, relish and sport peppers as toppings as well as the standard for this style, fresh cut fries on top. At 35th Street and Red Hot too they also serve some of the cities best fried shrimp and on my last visit to 35th I got into the "fancy dog" trend that's swept the city since Hot Doug got it started. I placed a few fried shrimp on top of the dog and ate away. 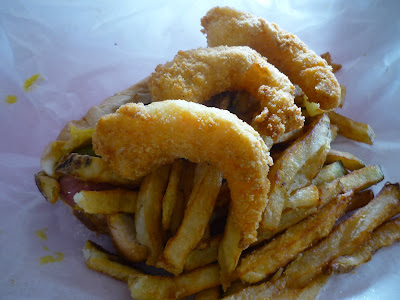 I've started eating here a whole lot more since my OP on the place when I was already going here quite often. It might be my favorite place of any of all the great Asian restaurants in Chicago and definitely my favorite Thai place. These days I find myself trying hard to go thru the menu but sometimes struggling to do so. The eastern sausage remains one of my favorite eats from anywhere but lately I cant stop ordering a couple of the catfish dishes. I like to start the meal with the catfish larb which is diced and fried catfish with seasonings and spices added in that's put into lettuce wraps by you. But my favorite dish there these days is their Pad Ped Catfish which came rec'd by 'Fuckerberg On Food' head honcho KZ. It's fried catfish stir fried with bamboo shoot, green beans, Thai eggplant, peppercorn, bell pepper and basil with coconut red chili paste. Simply an amazing combination of flavors. 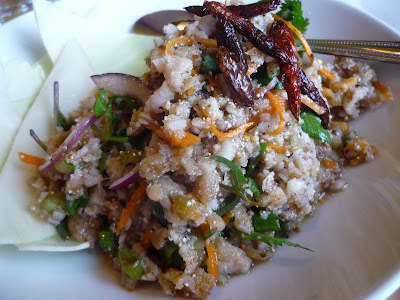 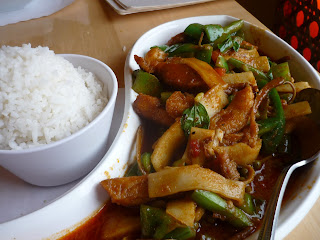 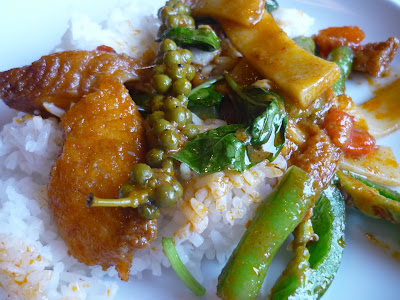 Awesome post you have here. A very helpful one. Thanks for sharing! I'd like to share the LPG cylinder I'm using. I'm sure this will help you in the kitchen.