-Grubbing in Chicago
Where those in with the trend eat at.

Anyone who reads my site knows that I like to stay away from what everyone else is talking and writing about in the food world. I try and explore the less known joints you wont find in Timeout or Metromix, the places that locals have been eating at long before whoever writes the stories about the trendy spots moved here into the city. However I don't have a problem with new places or spots that are going with the trend, just as long as they do what they're doing right. So when Del Seoul opened up in my (born and raised) neighborhood I was intrigued since it was basically the first Korean taco joint in Chicago, a trend that has swept thru LA and other parts of the country. I was even invited to come in for a special sneak peak but I didn't feel that was fair since no one else ever knows who I am at these places I go too. So even though I declined on the special guest invite, I have been over there to eat on a few occasions since it. They didn't know it was me. 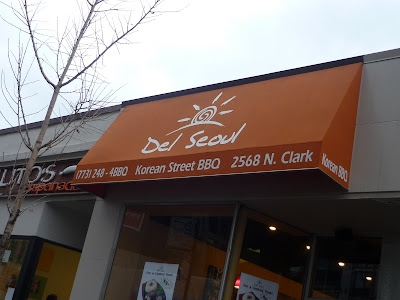 a new on the scene and hot spot in Lincoln Park

Del Seoul is a Korean joint with some fusion added in. Since our people in politics are too stupid to allow street food and trucks etc, Korean tacos were relatively unknown in the area until Del Seoul brought them to it when they opened. Aside from the ever so popular tacos, they also do a traditional Korean bi bim bop as well as grilled Korean bbq plates and a few other things. The menu is actually small but getting bigger as they get settled in. It's been busy from out the gate so I respect what they've been doing the last 8-10 months since they've been open. Lets take a look at some of the menu items offered. All of these are inspired by the popular street foods of Korea and California. 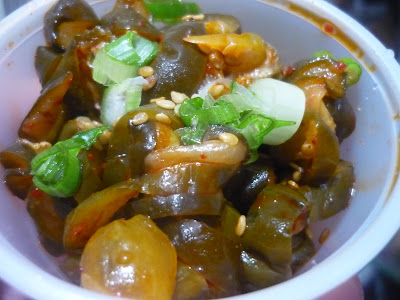 ^Many of the menus items are made using the owners grandmas old recipes. In fact both he mom and grandma can be found in the back kitchen doing up their specialties, I've seen it firsthand. The kimchi was one of the best versions I've had and I have bought some just to have in the fridge and play around with in dishes I make before. I thought it was really good and I hope they get a kimchi burger onto the menu board sometime soon. Also great but not pictured are the market picklz, which are Kirby cucumbers with toasted sesame seeds and chili. God stuff ma'aan. 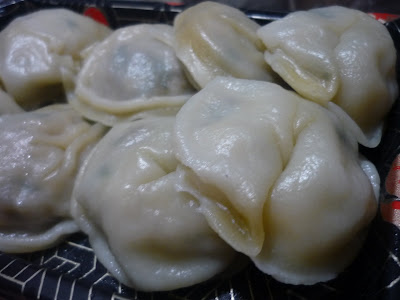 ^The dumplings are my favorite menu item at Del Seoul. In fact they are some of my favorite dumplings in the entire city. This is one of those old time family recipes they use and I always get an order when I go to eat here. So they say the recipe is a 100 year old all in the family kept secret. The dumplings are handmade and the skin is thin like I like it. They're perfectly steamed with the just right texture and strong taste of ground pork with seasonings inside. 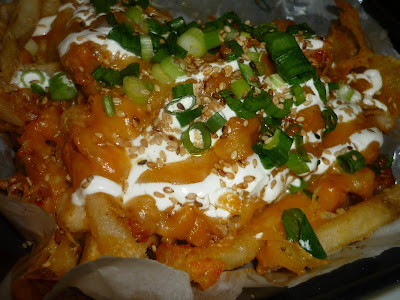 ^These are one of those fusion creations we talked about up above. They take fresh cut fries and fry them to perfection and then they are topped with sauteed kimchi, onions and pork belly, on top of all that goes melted cheddar jack cheese and sour cream. Some people I've talked to and read from did not like these, I thought they were great. I'll get them again. 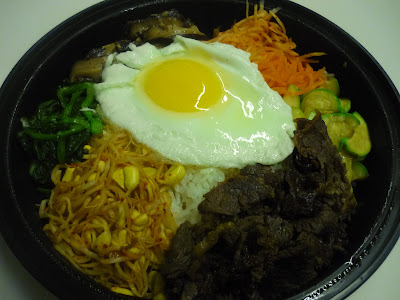 ^This is a traditional Korean dish and one of my favorites dishes out there. I always order bi bim bop if a place that intrigues me has it. Now many spots offer this favorite in a stone bowl which makes the rice crispy at the bottom and I think better. They have the stone bowls at Del Seoul but I have not tried one with the bi bim bop. The only time I ever tried it I took it to go. It was pretty good. I've had better versions but this might of been a just opened still working out the kinks type thing. The beef wasn't that great and not merely as good as the other dishes it had it in and the sauce was just ok. I still ate the whole thing so it wasn't disgusting or anything like that. 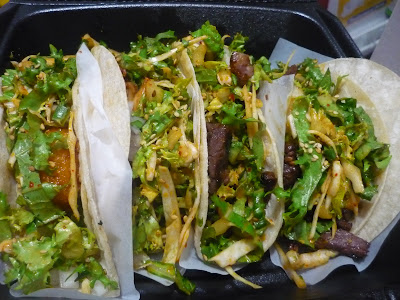 Now these are what everyone was rushing over there for when they first opened. Business is still busy too because every time I have been in there it was packed, mostly with hip young Asians. Korean tacos are the new trend in food. They're a simple fusion that when done right turns into a chow kings pleasure. They take common Korean grilled meats and throw them into a tortilla and they are topped at Del Seoul with a cilantro and onion relish, chili garlic salsa and a secret slaw. Served on corn tortillas they can come with kalbi aka grilled short rib, spicy bbq pork and chicken as well as sesame chili shrimp which are hand battered panko crusted shrimp. At first they needed to get the recipe down pat but since then these bad boys are a great snack at under $3 each. They also offer bahn mi sandwiches and have BBQ mixed plates. I hate the tredy spots but that because most are just that, this is a trend that will live on and I'm happy to have them in the neighborhood. 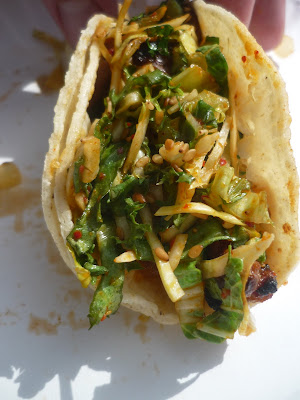 Korean tacos are the new trend in food? Are you two years behind on your Newsweek subscription?

Yes its true that loose meats are for the most part under seasoned, they also always taste homey and comforting.
Janine Zargar | Moshen Zargar | AKZ management