'Big Shrimpin' on the History Channel was one of my recent reality TV guilty pleasures. Long before I knew just how much dedication and passion it takes to be a shrimp fisherman, fried shrimp was a guilty pleasure of mine as well. We've been making the round at S'C'&C visiting some of Chicago's old and new shrimp shacks which have long been a part of the city eats locals love. Today we head down Irving Park road over to the North Center neighborhood where Snappy's Shrimp House sits. It might not be as old as some of the other shrimp spots around the city but it's following is as loyal as any. 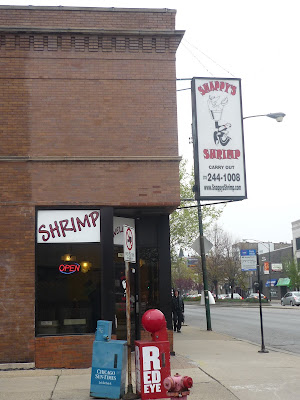 Lets start out by saying yes it's the shrimp that are the namesake. But if for some odd reason you don't like crusty crustaceans or if you've been cursed and are allergic to them, they also happen to do grilled chicken to a charred bird lovers standard. I had heard heavy praise for their chicken sandwiches and also their jerk chicken wrap. Intrigued, as there are actually times when I feel like something "healthy", I tried both of them and was impressed with each. Snappy's is pretty barebones and doesn't try to be anything else other than an excellent fried shrimp shack and also a really good neighborhood lunch spot with a few other things in case shrimp and other fried seafoods arent your thing. 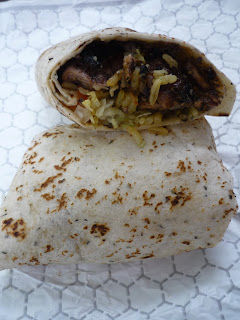 Jerk Chicken Wrap
The wrap is simple but savory so I enjoyed it for what it was. Much better than your neighborhood Shitpotle. The chicken had a mild jerk sauce and was cooked up previously but then chopped and reheated which lead to the pieces being crispy. Also inside the tortilla were pineapples, rice, lettuce, tomatoes and sauce. A nice bite for a nice price ($5.50). The house marinated chicken sandwich is not something I ever would of thought to order if I hadn't heard good things about it from a few trustworthy sources. They were right. Again the chicken is chopped up so the pieces are crispy. Add in the lettuce tomato and sauce with a Kaiser bun and again another example of simple is sometimes better. I've had this sandwich a couple times. 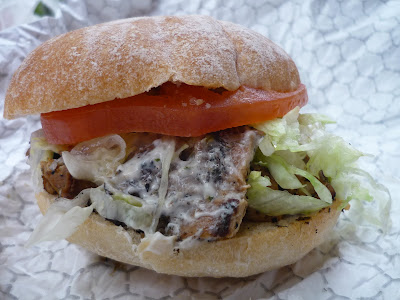 But as mentioned already it's all about the shrimp at Snappy's. Nothing farm raised from China or elsewhere is used. It all comes from the Gulf, Alabama to be exact. The same state where the boys of 'Big Shrimpin' make a living. If your a shrimp cocktail fan they make a great example of it. Nothing fancy as there shouldn't be, just perfectly cooked shelled shrimp which are kept cold and come served in a plastic container with a side of cocktail sauce. I like to grab an order from their fridge to have later in the week when I stop in but it rarely lasts past that day. 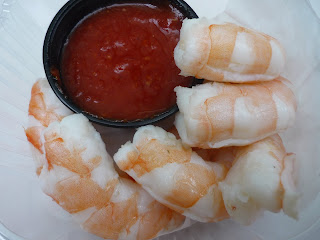 Snappy's Shrimp Cocktail
And introducing the star of the Snappy's show his name is Shrimpy. He comes from the Gulf Coast where the best of the best come from. Snappy's does an excellent frying job and has the perfect coating as far as thickness goes because you never want too much. Especially not when the flavor in these wild caught American fished shrimp is what makes them so good. They come about sixteen to a pound and I like to use just a tad of the sauce you choose (hot and or cocktail rec'd) to drop them in before devouring them down. Nothing fancy here folks, I'm not sure they twitter and dont know if they'll care what hip trendy new cocktail lounge your taking their top notch fried shrimp product too. But you should take note if you like the places that pick something tight and do it right. Snappy's knows shrimp. 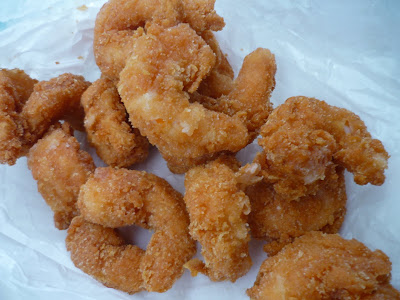 Used to live up by Snappy's so I went a lot more than I do now, thanks for the reminder. This place is a gem, especially for the neighborhood.