The recent Ozzie Guillen comments on Fidel Castro have have brought the country of Cuba back into the spotlight for a minute or two. I agree with the people that have been able to get away and those that suffered because of the dictator. I must also admit that two things come to my mind when I hear 'Cuba'. The first is a big part of Cuba whom I have no love for, Fidel himself. The second is something that has little to do with the Caribbean country but I got lots of love for, the Cuban sandwich. Actually the ham and cheese sandwich has Cuban roots but the Cuban sandwich is more a product of USA regional eats. Originally served in places like Key West and Tampa where early Cuban immigrants would eat these sandwiches on lunch break. So today we head downtown to East Congress street just off Michigan avenue to a place called Cafecito. 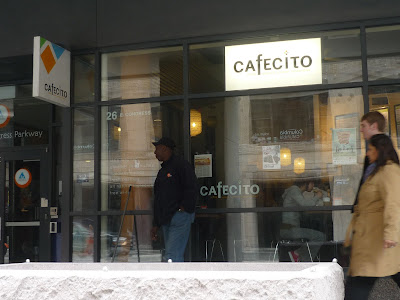 Cafecito burst onto the scene a couple years back and has received lots of praise since then. Already located in a location that's hard to fail at getting people to come in, they don't just settle for the foot traffic with average fare and make a top notch Cuban sandwich. Having lived in Tampa for a year I fell in love with the Cuban and consider it to be America's best regional sandwich. Countless people have called Cafecito's Cuban the best in Chicago and because of constant mentions of Cuba in the news this week I got a taste for one and headed over to Cafecito to see for myself. Cuban Sandwich from Cafecito
Alright lets start off where we have to when you fell in love with this sandwich in its hometown, its not Tampa Bay terrific but its really damn good. As always for anyone trying to recreate an authentic Cuban the bread is near impossible to duplicate but the second important part, the pork roast is the actual good stuff. The ham could be of better quality, like that cut off the bone but other that and the bread, which is a problem for anyplace outside FLA, this is a top notch treat. The combination of pork, ham, pickles, mustard and Swiss cheese is genius and this version at Cafecito verifies that. The only reason I hadn't been earlier is parking is a bitch near there but this time I had someone to run inside. You see Ozzie, the fact alone that the people of Cuba cant get a real deal Cuban sandwich because Fidel is coo-coo is reason enough to not respect the man. Add in everything else and he's nothing but a world class schumck. 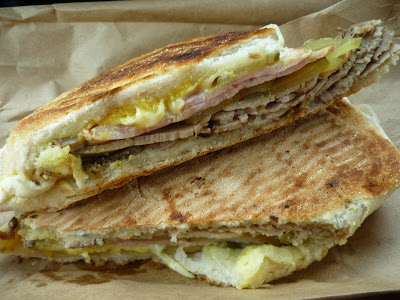 this is just a test to see if comments work