-Grubbing in Chicago
Where the White Sox fans eat.

Its baseball season again in Chicago and the White Sox open the 2009 season against the Kansas City Royal's on Monday at Comiskey Park. If you read the site then you will know that I am a Cubs fan and have been since day 1 and I don't particularly like the White Sox and I have some bad news for their fans. Although Ozzie always has his troops ready and they never under perform, this will be a tough year for the White Sox. The bottom line for the Sox as a team is do they have the staff to get the job done? If you listen to ole' Sox pitching coach Donny Cooper on the Score he says yes but hes a little nutty so don't take everything he says to heart. I say no and will leave the analysis to Peter Gammons, Karl Ravech and John Kruk as I agree with their preseason outlook and put my money on the Cleveland Indians (+160) to win the AL central this year. The Sox don't have the pitching and the hitting is getting close to acquiring their AARP memberships. The Cuban missile wont be able to carry an entire team and Carlos Quentin will come back to reality or just get injured again. Only time will tell but this is my 2009 season outlook for the White Sox. Lucky for Sox fans their stadium is within a stones throw of what I now call the best hot dog stand in Chicago. 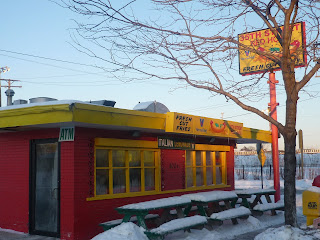 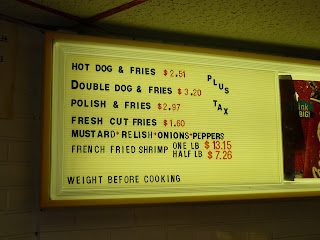 I have a new 4th wife in my hot dog family. As you may or may not know I am a huge fan of the "minimalist" or depression" style dog. Its a simple natural casing hot dog placed in a cheap steamed bun and topped with your choice of mustard, relish, onions and sport peppers and comes topped with Chicago style fries. What are Chicago style fries you ask? fresh cut fries made with one of those old school potato slicers that go right into the fryer after being sliced by an employee. This is the true Chicago style hot dog and most born and raised residents will completely agree. I have been to 35th st red hots countless times post Cubs-Sox games but just never remembered how good they are (booze will do that) until I decided to try them again one day when this sign caught my eye. 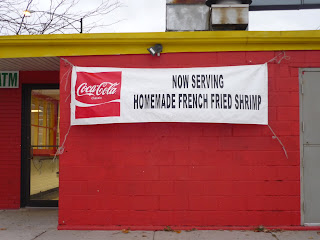 The shrimp at 35th had a very lightly coated breading that was similar to the Southside Shrimp House (RIP) and there is no difference between the two to the best of my memory. This is some of the best fried shrimp in the city and its served at the best dog stand in town. The price is right too and there's not a negative to the place except maybe its a sox fans hangout. This is the best pre-game food around Comiskey. If your going with a buddy/spouse to the game stop in here before and get a dog each and a half pound of shrimp instead of eating the overpriced average at best stadium food. 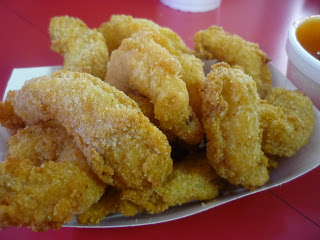 Now as far as the hot dogs go they are right there with Gene & Judes but the fries are now my favorite in the city. They use the same machine to slice the fries ala G&J and Jimmy's but the fries come out a little thinner and thus are never undercooked. Perfect every time. They will start slicing the potato for your order upon your entry so they never sit under the light. Man I love this spot and I just might start going to some Sox games when they aren't playing the Cubs when I get invited. They have three things on the menu (four if you include the fries) and they are all better than good. In case you were wondering about my other three loves Gene & Judes in River Grove and Jimmy's Red Hots on Grand are doing well and we still think of Demon Dogs every day as she rests in peace. It wont be such a peaceful season for Ozzie and the boys in black. 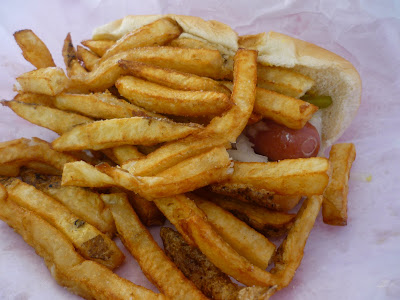 Best dog and fries in Chicago

I'll have to get over there and try those shrimp.

You are so right, they are the best french fried shrimp, they are so big and fresh and the breading is light. Can't resist the fries either.
BK