-Grubbing in Chicago (land)
Where the burbanites eat

Michael's Hot Dogs (now of Highland Park) has been a name recognized in Chicago since 1977. Back in the early 90's there used to be a Michael's in Lincoln Park and they were known for their jumbo dogs, charbroiled burgers and enormous salad bar along with those profile pictures of all sorts of children on the walls. The LP location eventually closed down but Michael's is still very popular in its Highland Park location. It fits well in HP as the website declares "Michael's was one of the first restaurants of its type to recognize a consumer demand for healthy fast food" Lord knows the real housewives of the Northshore need to eat healthy. When you enter Michael's there is a line for the typical burger fare and a line for the salads and potato bars. It had been years since I had a loaded baked potato from Michael's, whenever the LP location closed was the last time I had been but I did remember the cheese fries and loaded potatoes being good. 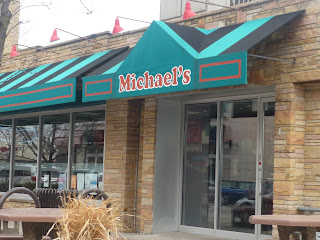 Michael's is very popular with people in the burbs

I finally made it to Michael's in the suburbs just recently and got to see if the chicken teriyaki potato is actually legit or if I was just young and dumb and didn't know any better. I can tell now you that its somewhere in between the two. For whatever reason they still taste really good and hit the spot on a cold day. The potato features the combination of the tato loaded with little square cut pieces of white meat chicken loaded with cheese and teriyaki sauce with sour cream on the side. This is a meal that for whatever reason works with me. I wouldn't recommend driving out of the way for one but if your in Highland Park and hungry then go for it. I also think it would be pretty darn easy to replicate this if not make it better at home. 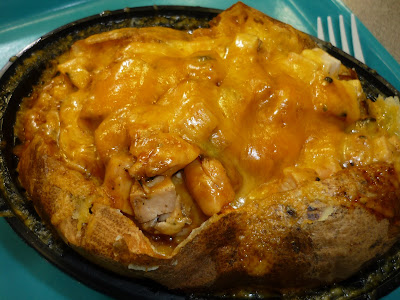