Welcome back to the gyro-tron, did you miss it? Next stop is the burbs of Niles and Nicks Drive In. I'm not sure exactly how long but Nick's has been in the area for some time and served at least a couple generations of people/families. Why its called a drive-in I have no idea, maybe because you have drive into the small parking lot hoping to find a spot. Nicks has a reputation of having the best gyros sandwich in Chicago and so I had to try it. Over the winter I took a ride to do some shopping at the Asian mega store Super-H Mart (HUGE Asian grocery store/mall great for your Asian ingredients) and grabbed lunch from Nick. Nicks menu is heavy with Greek specialties and Chicago gyro stand regular items. They feature rotisserie chicken, ribs, kebabs, hot dogs, Italian beef, hamburgers and of course gyros. 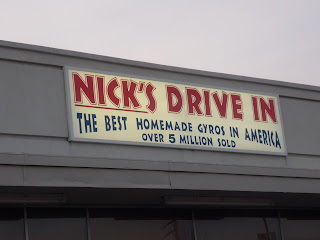 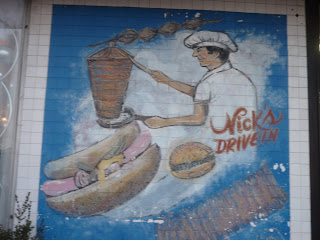 Nick's reputation for having the best gyros in the land of the gyros is due to their secret homemade family recipe that is prepared from scratch. Its nice to see a place that still does it the old school way. I would say that almost 90% of places order their cones from one of the many gyro companies here in Chicago. In case you didn't know: every single gyro manufacture in the country is based in Chicago. The big companies like Kronos make over 80 million a year and at least half of that comes from businesses in the Chicagoland area. That is a ton of pre-formed gyros cones around town. Its not as if these cones are inedible and in fact many places still put out great gyros that use these companies for their meat. Its all about the preparation by the restaurant your eating at.

Nick's gyros have a style all of their own due to the fact they are homemade. I made a few trips to Nicks since the time I was told to go and it has been a mixed opinion on each visit. When Nick's cuts the meat right off the cone and its nice and charred it is a very good mixture of lamb and beef with little bits of garlic in each piece. However on a few visits it had been pre sliced and no where near as crispy as my first gyro dinner there. The same time it was pre sliced the tomatoes and onions weren't so fresh and the pita wasn't warm. Maybe the 2nd and 3rd visits were off days or something but along with the ehh frozen fries and watery tzatziki it didn't live up to the hype and there wasn't enough sauce even when I ordered an extra cup. In summary when this place is on they are on and when they are off...they're off. 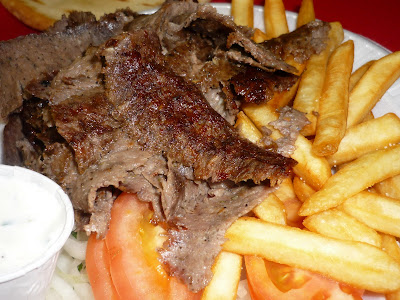 I'm actually relieved to see that you gave this place a so-so review. I've given Nick's a number of chances as well, hoping to catch them when they're really 'on' and have concluded that it's not worth the effort.

I usually wholeheartedly agree with your reviews, so when I saw that you were featuring this place, I was expecting a rave. Good to see that we're still on the same page.

You have a real knack for describing the tiny details of what makes some places stand head and shoulders above the rest, and your reviews carry a lot of credibility. Keep up the good work!

RuthI recently came accross your blog and have been reading along. I thought I would leave my first comment. I dont know what to say except that I have enjoyed reading. Nice blog. I will keep visiting this blog very often.