When I drove by the sign for Apollo Burgers it caught my eye because I had never heard of the place before. Its pretty rare that this happens even if its all the way out in Bensenville. I pulled into the parking lot and it was a little less intriguing after peeking into the place and checking out the menu but I had been sucked in and was hungry for something quick and I don't do the McD and BK drive-thru's. The land of O'Hare can be pretty boring with its food selections but there are a few out there that get the job done. When you've eaten at as many roadfood joints across the country as I have you can start to develop a feel for whether or not a place is good just by looking at it and scoping out the menu and scene. 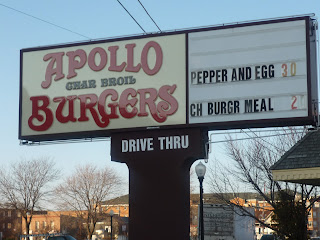 The charred burgers were a sign of something that could be good but everything else told me that this place was going to be nothing special and I was already starting to regret ordering after the fact. The place looked like an old Bakers Square and there was no hint of this place being anything more than average at best. There were no people inside, none in the drive thru and none ever came the entire time I was there. I was very suspicious. The menu had char burgers and a few special burgers and I went with an Apollo burger which was a cheeseburger with lettuce, pickles, onion, thousand island orange sauce, cole slaw and pastrami all on a sesame seed bun. The burgers are indeed charred and it made for a better meal than any fast food chain. Overall it was just a little better than average and the fries were frozen but the charred patty and interesting topping combo turned out out to be a totally acceptable lunch in this desolate area for food. I'll most likely never it make back but if your in the area you will enjoy this burger better than any of the chains around it. I had learned over on LTHforum that this style of burger is big in Utah. It may well be a Utah creation and there is even a chain in Utah called Apollo Burgers. Although there is no relationship between the Utah locations and the Bensenville, IL spot there is for sure a resemblance between the two. Unfortunately you will have to go to Utah to find out. Apollo burgers has just been closed due to the O'Hare expansion. Oh well you didn't miss much. 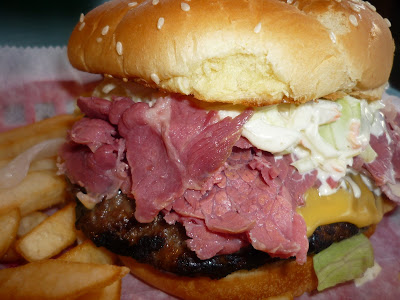 Strengths: If your going to use a pre formed frozen patty then you might as well char broil it. Even a handmade patty of the best quality of beef for a burger would taste better charred. Its also very reasonable for the price and quite filling.

Weakness: The whole pre formed frozen patty is enough of a weakness that its easy to exploit but I was expecting a POS burger so this was a tough call on the final grade.