-Grubbing in Chicago
New to the 'Scene'.

I had a really nice dinner last month at one of Chicago's hot new spots GT Fish & Oyster. Let me star off by saying, don't you loyal readers worry, I'm not going all fancy on that ass. I usually let the 'elegant know it all's' take care of (and argue about) the new trendy places but just because a place is new and trendy doesn't mean it cant be good. It's definitely a hot spot and the place was packed, no seats at the bar, booked for the night but everyone that was able to be in there was having a good time and it was all casual. Sure the ladies were pretty and most of them with men double their age but I had a good time looking around. The bar stocked some nice craft beers and had a cocktail list as well. First up were the oysters in the restaurants namesake. 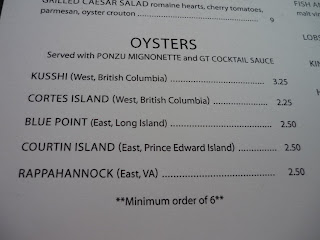 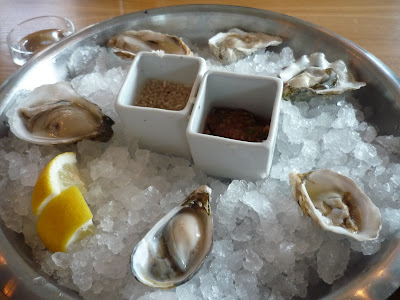 These oysters were the best yet I have had in Chicago. It's hard to to give a real answer as to which ones I liked best, they're all great, extra fresh and full of ocean flavor. You really can taste the difference from which oceans they come from, climate etc.. The dipping sauces which included a ponzu and GT style cocktail we're excellent with just a tad of one on each oyster. In the end I decided the Cortes Island oysters from West British Columbia were my favorite and that's just more bait to get me to Canada's B.C area sometime soon. As I mentioned already the menu at GT consists of smaller sized samples and you have a selection of items both hot and cold. I was with the fam so we we're able to try pretty much everything. The fresh oyster menu varies but they let you know the days selection and where they're from. A few of these ultra fresh oysters and some good handcrafted brew is as fancy a night as I need at this point in life. 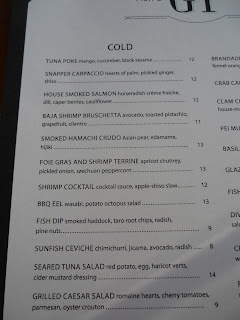 The days selection off the 'cold' menu (click pics to enhance)

I really like the menu and how they set it up. It works well for larger groups of people and also anyone who wants to stop in for a drink and maybe try one or two of the options off of it. Also great is the fact it isn't a huge selection but does cover a good ground and what they do offer they do well since there isn't a million things that need to be done in the kitchen. I'm not sure how often they switch up the menu. The items came out almost as fast as they were eaten. I thought the cold menu might of been better overall than the hot on my visit. Maybe this was because it was a nice hot day outside but it also had my favorite eat of the night on it, and although the excellent oysters have their own section, they're cold so they count as that. I'd order all of these items again, they were all great, my favorite was the BBQ eel, I'll be back just for that. 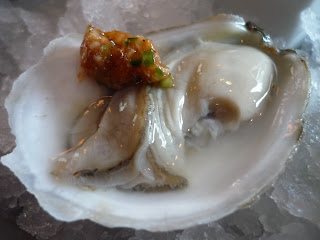 A taste of the Pacific ocean in Chicago 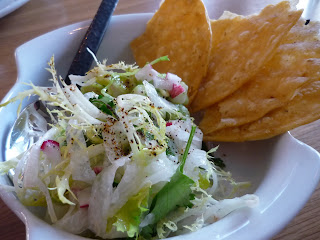 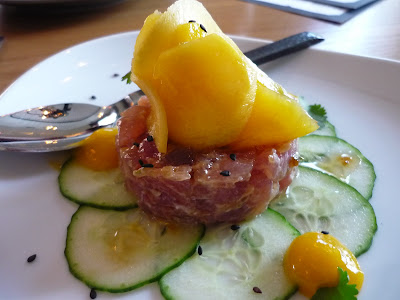 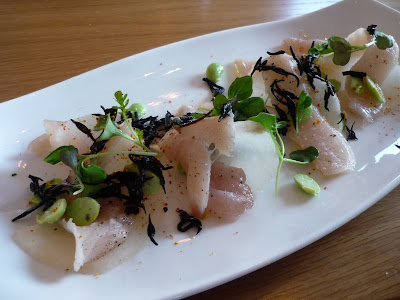 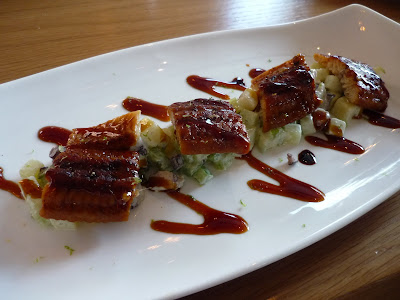 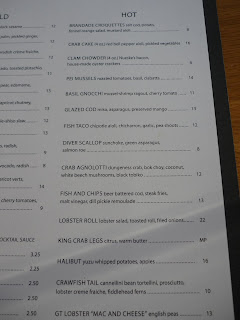 The days selection off the 'hot' menu (click pics to enhance)

The hot part of the menu was also very good but not quite as much as the cold portions but it's hard to beat fresh oysters and such on a nice sunny day. We ate a good amount off of it including some non seafood selections. If I had the chance I might of "tried this instead of that" but again it's all good when you got a group with you. Others enjoyed some of these dishes best. Nothing was awful but I wouldn't order the fish and chips again and was underwhelmed by the fish tacos, they were pretty good, I'd just spend the $12 on a different dish next time. I'm a lifelong big time clam chowder fan and this was an excellent rendition and the pork belly off the 'not seafood' selection as well as the steak. The steak was very good but your there for the super fresh seafood. The pasta dishes were what stood out for me on the hot selection side as well as the crab cake which was my favorite from it. 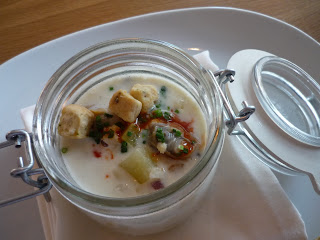 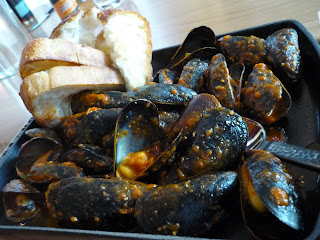 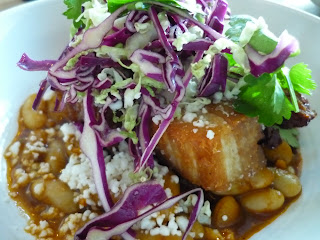 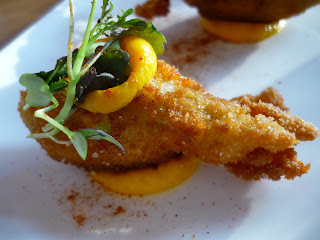 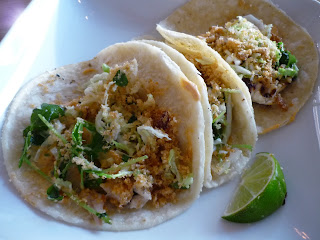 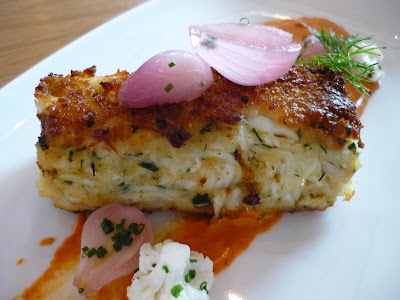 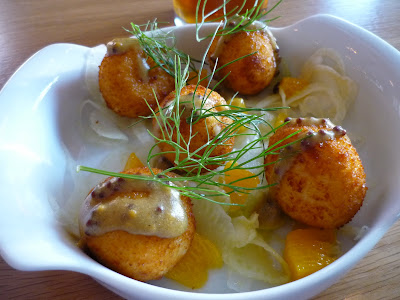 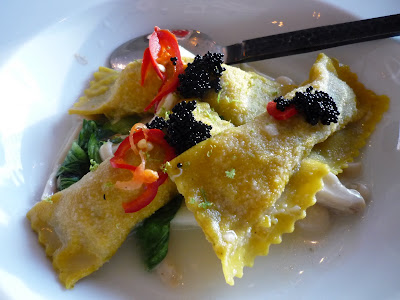 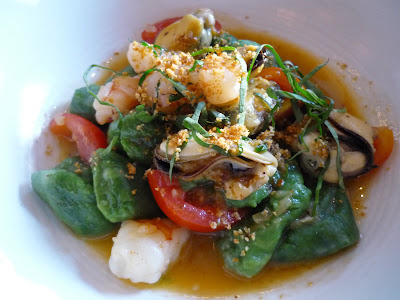 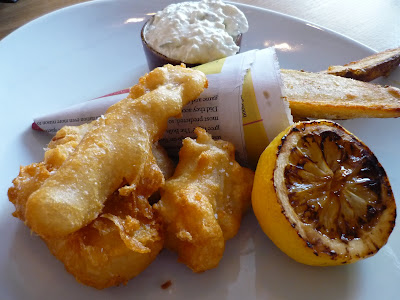 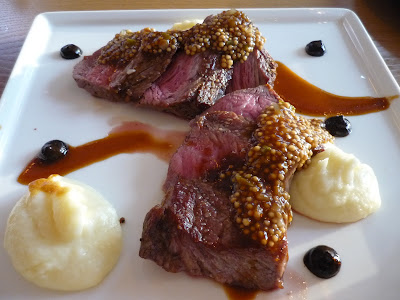 I'll for sure return to drink at the bar at GT and eat some oysters which are one of my favorite food delights along with a few other options from their nice small plate selection. I was very satisfied with everything from the fresh well prepped food to the friendly service of each and every employee. GT is a well run restaurant that lives up to the 'scene' and worth a return. 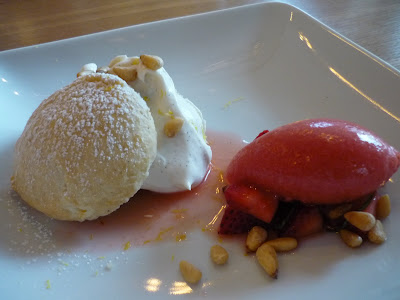 Looks tasty! What is the sauce on the skirt steak?

It was very tasty, thats some sort of mustard sauce, worked well, the steak was great even though it's a second thought when your there, Allen Brothers beef strip steak is what it was.

Yes! BC is the best!