Last summer I was out in Joliet riding along Route 66 when we decided to check out the downtown area of old Joliet. We drove around and passed by a place that was on my radar thanks to a share on LTH. Chicken-N-Spice is one of the few places left in the area. It's seen better times. But they do have a wonderful little baseball stadium which is right downtown. You can catch a Frontier League Baseball game at the home to the appropriately named Joliet Slammers. The areas other big "attraction" is the old Joliet State Prison along Route 66. It's where scenes from the movie Blue's Brothers as well as Fox's TV series 'Prison Break' were filmed, the prison was closed in 2002. Nowadays it's a quiet downtown area but nice place to catch a game. The Metra will take you right to the stadium and Chicken-N-Spice is also right nearby. Lets check it out. 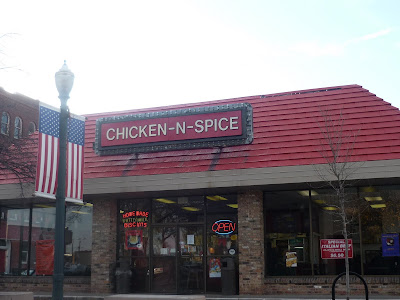 a locals favorite in Joliet, IL

The specialty of the house is fried chicken and their most popular item are the chicken 'chunks'. Seen on their own part of the menu below they come in portions of anywhere from 3 to 100. All were talking here is breasts of chicken coated and seasoned the house way and then fried. They have other options on the menu including regular fried chicken. In fact these chunks are a popular eat around town with their being a few other places that offer them on their menu in and around Joliet. From the outside and inside too, Chicken N' Spice isn't much. Chunks don't sound all that intriguing or original but I liked their chunks and would easily get some again if in the area. 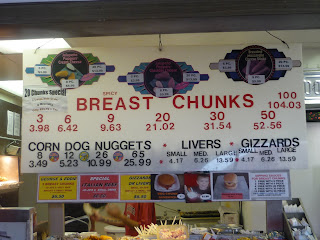 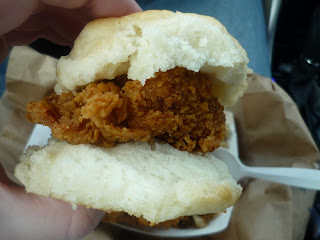 They offer the "George & Eddie" special which includes 3 chunks, house made spicy rice, a biscuit and drink for $6.50 and it's not a bad lunch at all. Much better than the corporate fast food outlets around town. The breasts were really good and I normally don't care for chicken breast at all, too boring. But the coated it perfectly and seasoned it well and fried them to perfection so they actually had some juice in them. The rice was pretty damn good too. Just a yellow rice with some minced meat and veggies thrown together with some seasoning. All things considered, price and other options around town, I really liked Chicken-n-Spice. 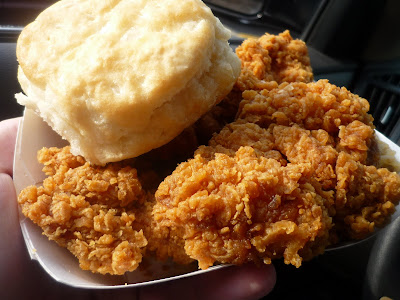 I've got a very interesting article to share with you today. It?s from my good friends and fat loss cooking experts Dave and Karine from MetabolicCooking.

In this article, you will learn:

1. Why most "healthy" cookbooks use ingredients that actually make you fat.

2. How to ensure your meals are optimized for fat loss!

3. What to do so your meal plan doesn't hit a fat loss plateau.

I'm telling you, this is GOLD!

Is your food making you FAT or burn MORE fat? (article) By Karine Losier & Dave Ruel

If you've tried fat loss diets before and have used a variety of weight loss cookbooks to try to lose body fat, then you very likely know by now that those fat loss diets and the "healthy" cookbooks that go with them don't work.

What is it about them that makes successful weight loss so difficult to achieve?

Well for starters, most "healthy" cookbooks are NOT designed with high Metabolic Thermo Charge ingredients. They are not using the metabolic powers that certain foods have to make your body burn more body fat. Instead, they use ingredients with very low thermogenic effect.

Why does this matter? Because the Metabolic Thermo Charge of food stands for how many calories your body will burn just by breaking down the nutrients each time you consume a certain food.

Most people have absolutely no idea of the power some of these foods have over the fat burning processes that go on inside the body, and so they never really think twice about them. BIG MISTAKE.

For example, simply consuming high-quality protein with most meals will naturally burn off more calories and move you closer to your target weight. Lean protein has a very high "Metabolic Thermo Charge". Spices also have a strong thermogenic effect on your body. Combining certain foods together, such as chicken and turmeric, with help you burn more fat after you eat it.

But that's not all. Another thing to consider is whether or not your so-called ?healthy? cookbook has a real structure. Too often, cookbooks are just a bunch of recipes thrown together at random ? you pick and choose what you feel like eating at that point in the day. That is NOT going to make you burn fat faster!

Having a structure is mandatory if you want to rid yourself of stubborn fat. That's why we developed a quick and easy "Metabolic Nutri-Profile" system for all our recipes, so you can see precisely what nutrients you're taking in, which ensures that each meal makes the most of your metabolic rate.

Don't make the mistake of venturing into the food jungle without your compass!

So we?ve talked about the food and the structure of your eating plan. Sounds like we?ve got it covered, right? NO!

Ever followed a diet to a ?T? and all of a sudden noticed that you stopped losing fat?

This is called the Metabolic Adaptation Phenomenon. It occurs at that point in your diet when your body knows precisely what it's getting in terms of food and has fully adapted to it. When it reaches this state, your metabolism slows down and fat loss screeches to a halt.

In order to avoid the Metabolic Adaptation Phenomenon, you have to vary your nutrient intake regularly, shocking your body as time goes on. This keeps it guessing and ensures your metabolism stays on high at all times. Having a wide range of fat loss recipes at your fingertips makes avoiding this frustrating condition a breeze!

Now you know the REAL score when it comes to fat loss and dieting! Be sure to watch out for these three sneaky saboteurs next time you make the decision to lose fat!

If you struggle with food or nutrition, Metabolic Cooking is your knight in shining armour.

Talk to you soon!