These new ad's from the taco hell about their volcano taco's have me in disgust. Its time for another taco joint shout out.

ATTN: Taco Hell--Some of us like real food and not tacos with shells the color of sorority girls puke after too many cranberry vodka's. Give up your ad's in any city with real taqueria's, its a waste of time, stick to Middle America.

Why pay more? Because we spend more on food we eat than we do are dog's

La Pasadita will always be good in my heart b/c its where I discovered the true beauty of what a steak taco should be...Char grilled skirt steak that tastes like clean meat, chopped nicely and topped with fresh onions and cilantro on a warm corn tortilla with salsa verde with an actual kick on the side. Ones things for sure, any and every Mexican restaurant in the city is better than the Chihuahua's even La Bamba, which I recommend you avoid at all costs.

I had a friend in HS who lived right by taqueria el asadero in Lincoln Square and we would always eat there when we were running around wreaking havoc on the neighborhood. Back then they had what I thought were the best tamales ever, and I really love tamals, they were large and very soft. Last month I decided to give an old favorite of mine a try. I hadnt been in 10 years so I went in and saw the article where Chicago Magazine names them the best steak tacos in the city but I didnt see my beloved tamales on the menu. 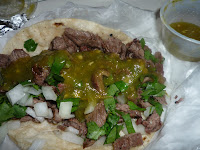 I am very skeptical of anything Chicago mag claims best in the wide world of food but I had heard before about the tacos here and ate them back in the day, so I ordered 2 steak tacos and asked about the tamales. To my delight they had them, they just arent on the menu. 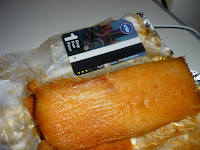 Tamales are the same as they ever were. Not the best in the city, but tasty.

Unlike other spots, they cook your steak to order, they take two thin strips of skirt steak and throw it on the grill and chop it to order so it takes about 10 minutes...well well worth it. These might be the best I have had, the meat was so tender, the toppings fresh and the salsa verde was amazing. Now in my top two along with another spot I got for you , pushing pasadita even further down in the standings, they are slipping like the Brewers. 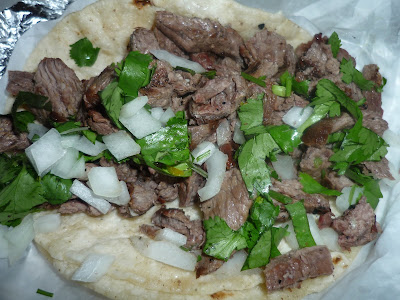