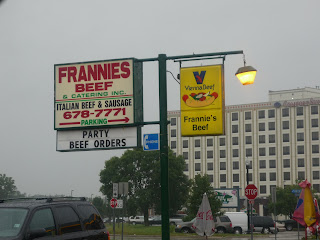 Frannie's beef is located in Schiller park near O'Hare. Frannie's was one of the few beef joints that looked worth trying that I hadnt been to...until now. Check! another one off the list. They use Scala's preferred at Frannie's and serve the beef in a gravy that is heavily seasoned with oregano and other dried green herbs. The peppers to my knowledge seemed to be homemade and were probably the best part to the beef. There is nothing wrong with ordering a beef from Frannie's with some of their fresh cut fries when in the area. Its not destination: Beef, driving but its still a tasty sandwich that is better than alot of other places around the city. Dont be scared off by a score given by me in the 12-14 's from the beef joints, that is a respectable score and doesnt mean its not worth trying, just not on my "All-Chi" beef team, which is hard to reach. They are still damn good players who have had careers like that of Robert Horry.

FYI scores in the 17-20 range are excellent . Dont even try anything that scores under a 10 and just be happy I did so you dont have too. 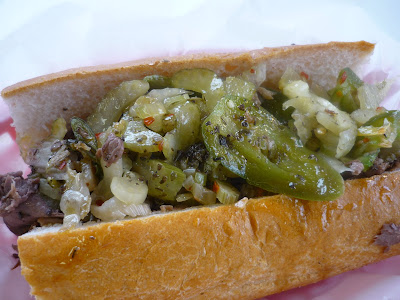 Beef with hot from Frannie's