It took a minute but the ‘Birria Boom’ of Los Angeles has arrived in Chicago. We’ve had plenty of places doing goat and lamb but for whatever reason we’re just starting to see spots whip up Birria de Res in crispy taco and quesabirria form. Birria being a classic Mexican dish originating in Jalisco and consisting of some sort of shredded meat cooked in a potent bath of liquid and spices. Goat is most popular but seems to be more of a celebratory dish than when it's made with beef and in the case of Tapatíos eaten for breakfast in taco dorado form. Birria de Res is basically spiced beef in broth. Exact recipes can vary by state. For example it's also popular in Zacatecas and Tijuana but it's made differently in each of those places. About five years ago a place called Teddy's Red Tacos opened in LA and they served what they call Tijuana style Birria de Res. The red tacos moniker comes from the cooking process of the taco where the tortilla is dipped into the red consommé that the beef is cooked in. The tortilla is then crisped on a hot flattop giving it a red hue. As Teddy's became an instagram sensation more birria spots started popping up and now there's tons of places doing it. 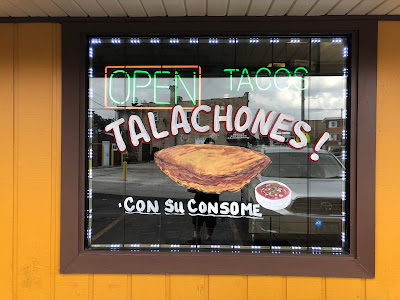 I'm not sure where the Quesabirria started but I can say it always seemed like a very Tijuana dish to me. I've heard from people that would know say that some parts of Mexico look at Tijuana as basically being America. So some people think the food is Americanized or whatever but from my perspective it's a place lots of Mexicans move to from other Mexico states and in doing so lots of regional Mexican dishes are mixed together creating a unique cuisine all it's own. If not in Mexico most likely somewhere in Califrnia. Bill Esparza @StreetGourmetLA mentions it in 2010. There's no doubt social media has played a big part in making birria de res a national sensation. Between the red tinged tacos, the melted cheese, and the dipping action it's pretty much the definition of food porn. While there are spots that specialize in Quesabirria de Chivo today's post is exclusively focused on those serving birria de res in taco form. That said I must give another shoutout to my favorite birria de res dish in the city - the Consomme con Carne at Tacos el Tio. But they don't make the tacos. 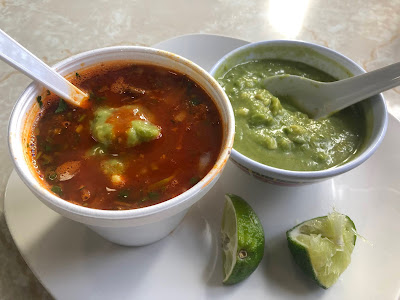 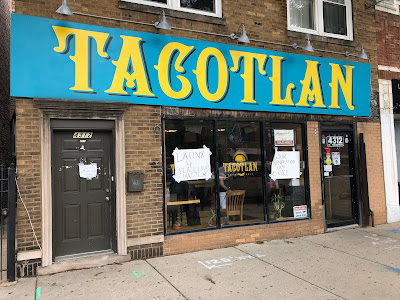 We start on the city's Northside in the Logan Square / Hermosa area near Fullerton and Kostner. I've written about Tacotlan before as it's an excellent family run taqueria. I'd call it a new age version of the local mom and pop type taqueria as it's ran by a dad and his kids. The kids have the business on social media so no surprise to see them running with whats hot in the form of birria de res in a variety of ways. As you can see below birria is being added to just about everything from pizza to ramen. 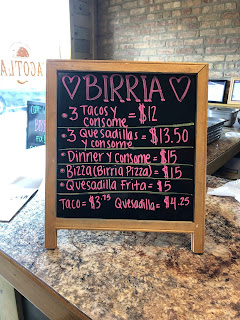 I believe Tacotlán started doing their birria de res as a weekend special but it became so popular they now do it every day they're open. No dining inside for now and no outdoor seating on a part of Fullerton currently under construction but that hasnt deterred cars of people from pulling up for pickup birria de res in a variety of ways. I tried both a taco and a quesabirria with a cup of consommé and came away extra impressed. Their birria is a bit chunkier than most as it's more chopped in pieces than shredded but this isn't a bad thing texture wise. I do wish the tortillas would've been better crisped but I could tell they had a ton of orders coming in so that can effect the patience it takes to get them semi crispy. The consommé itself is in the running for best sipping / dipping of the bunch. 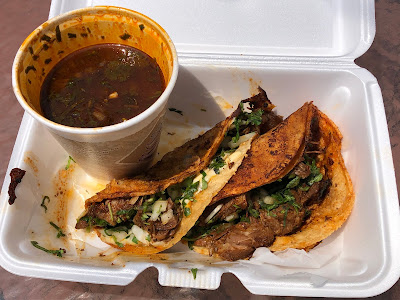 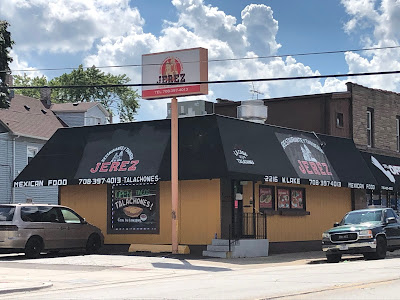 Well it's safe to say facebook knows me well. It's been suggesting pages of local taquerias to me for a while now. Sometimes I'll click on one and then it'll suggest a few more. That's how I found Restaurante y Taqueria Jerez in Melrose Park. As soon as I clicked on their page I was bombarded with pictures of QuesaBirra and other dishes like red dipped tortas and such. They have an entire menu of "Talchones" as they call everything on there. An order of QuesaBirria comes with three of them which is always one too many for me. That's ok though bc I take the other home and usually eat it upon arrival. These guys do a Zacatecas style birria de res which is described well in this piece by Southern California writer Gustavo Arellano. It's a weekends only thing and available in a variety of ways including as a big ole platter. But of course I had to get the tacos with cheese. I loved how they give you a ton of topping options for these as it's similar to a setup in Sayulita that had the best birria de res tacos in town. These are a contender for best in the Chicagoland QuesaBirria class. I loved the potent beef clearly spiced with a heavy hand and the consomme was basically meat there was so much shredded beef in there. Plus each taco was stuffed and the tortillas were nicely toasted. 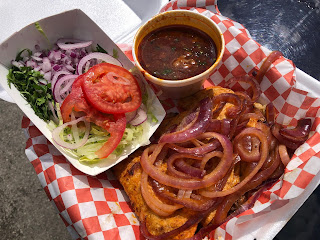 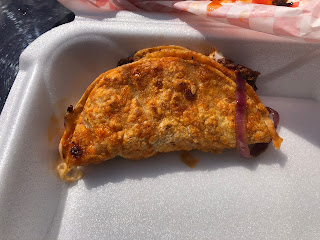 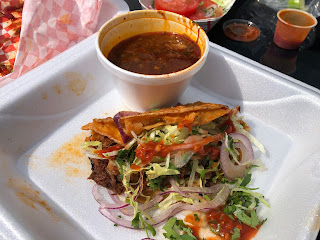 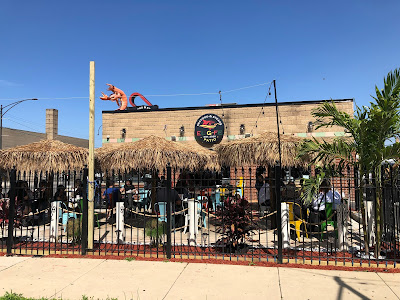 Another Facebook suggestion here. I drive by El Ge Fe on 47th street now and then including when on the way to another birria de res spot up the block (read on). They bill themselves as a mariscos spot but if you look at the reviews and the tables around you you'll notice everyone has a plate of their QuesaBirrias. They also post about it regularly on their facebook page. So they too know how to get groups of younger people in. I dined outside around a month ago and it was a little nerve wracking as I think it was the first time I ate somewhere since Covid came roaring into the States. It's a popular spot so there were groups of tables drinking and such. They're BYOB and sell michelada mixes and such. QuesaBirria comes four to a plate with a cup of consommé for dipping. These were just ok. Or at least the broth was just ok. It had a slightly unpleasant taste like all the fat wasn't skimmed. 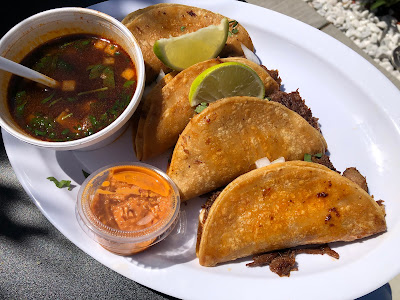 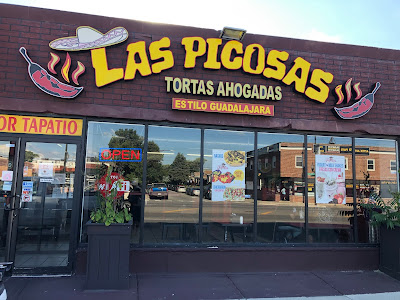 I've written about Las Picosas at 64th and Pulaski before. It's the anchor of a strip mall in West Lawn and they're known for their Tapatío menu. Tapatío being the term used to describe someone from Guadalajara. So of course their Tortas Ahogadas are front and center but that's not the only Tapatío dish they do. They call their birria barbacoa but it's the same idea as far as shredded beef as a taco filling. They offer a platter of four served on a sizzling plate with regular sliced onions, grilled knob onions, and also a halved grilled jalapeno. It's fun presentation but the plate isn't hot enough to where it crisps up the tortillas the way I like it. They're basically just soft shell barbacoa or birria tacos. 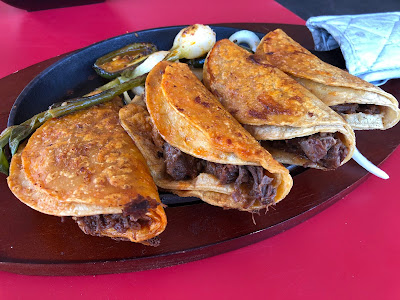 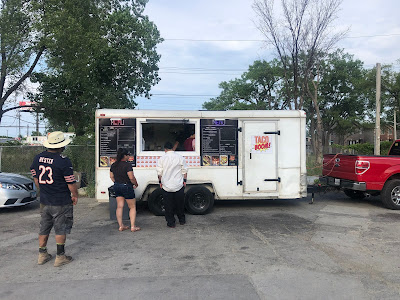 Taco Boom is a food cart that sets up shop daily in an empty lot on Cicero just past I55. Right around Cicero and 43rd street across from the park. I too found them through Facebook. They're one of the best street food setups in the city and the line on a weekend night will reflect that. Luckily most everyone is there for their Quesabirria which they say is their specialty. That said the menu is more than just those even if they take up all the grill space the entire night. Birria tacos are also an option if you don't like cheese and they've done a good job crisping them up just right. On my most recent visit I tried the birria ramen which is ramen noodles served with birria in it's broth. It's made with the classic ramen noodles we all remember from college but if we all had potent birria de res like this to mix in many of us would still be eating it. One can make a case Taco Boom is the city's best birria. 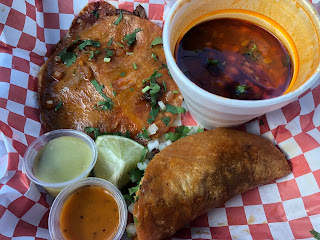 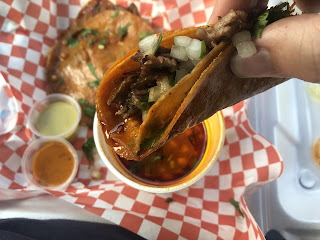 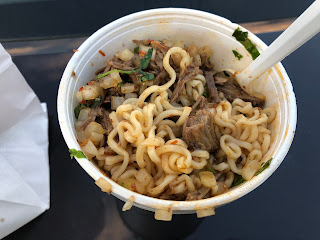 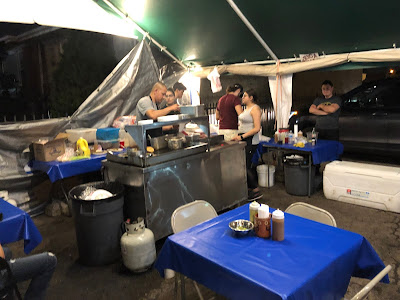 This roundup would be incomplete if I didn't include the most authentic tacos dorados estilo Guadalajara in town. I posted about Chavelo's last year in my Chicago street taco roundup. Well they're back at it this year in the same location of the parking lot of Mariscos Luis on 47th street. They set up shop on the Weekends around 8p and go until at least midnight. It's a very Mexico like setup and this makes the tacos that much better as they're cooked to order on a hot portable flattop. I've been by a couple times this summer and they always hit the spot. Sometimes they're crispier than others but I now just ask for them extra crispy. Though I keep forgetting to bring my own crispy giardiniera which I think would work perfectly in these tortillas full of shredded beef. Birria de Res is kind of like the Italian Beef of taco fillings and I cant get enough. Did I miss a spot? Let me know. 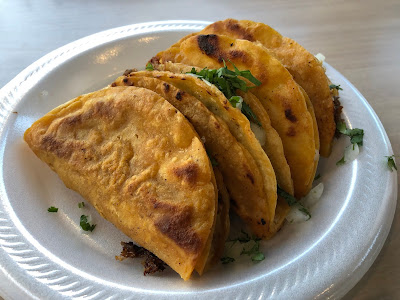 
See ya next time @chibbqking
Posted by KingT at 11:49 AM