With air travel a no go for the time being we decided to take a small roadtrip this summer. We're still hoping to be able to take a longer one at the end of August but around Mid-July we decided to go beaching for a few days up the coast of Michigan. A trip I try to take every summer but don't always accomplish since there's so many other spots to see. That said there isn't much better as far as a 2-3 hour trip from Chicago this time of the year. Western Michigan easily has the best fresh water beaches in the country and there's some cute little towns to be found up and down. That said this was a bit of a last minute trip so any type of cute beach bungalow was long gone as far as rentals go. So instead we decided to make Grand Rapids our home base. More on GR in my next post as today's will focus on the food we ate up and down the lake since even though we stayed in Grand Rapids we hung out on the beaches during the day. It worked out quite well actually as there was more to see / do in GR in the eve. Today's roundup will include food from Harbor Country all the way up to Muskegon. We beached all four days and found the Pere Marquette Park Beach in Muskegon to be best in class. It's spacious and the sand is super soft while the water is pretty clear. 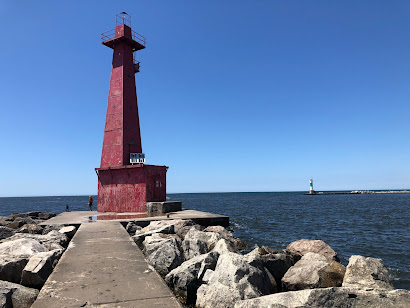 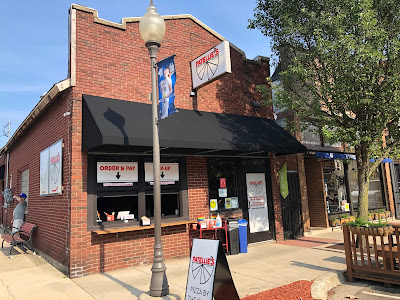 I've always loved the charming little town of Three Oaks. It's a great place to stay if you're headed to Harbor Country and don't need to be right on the beach. I feel like it's seen major growth the last decade. But not to the point where it's lost any charm or feels like any other suburb. Most of the businesses in town are local purveyors of whatever it is they're selling. At Patellie's that's pizza. Found right on the main strip of town (Elm street) is this semi newish pizza place. The Michiana area has some good pizza spots and you can count these East Coast style pies and slices among them. We had called to order a whole pizza but there was a bit of a wait. Luckily they do slices and huge ones at that. I was confused by the lady at the walk up window asking if I wanted my slices sliced so I said no and ended up with basically a 1/4 of a pizza in each slice dressed with fresh local toppings. 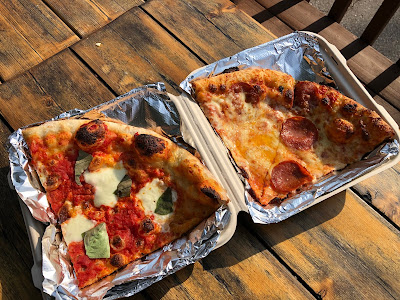 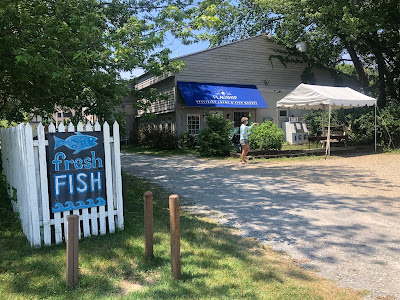 I recently took my first trip to Flagship Fish located on the Red Arrow Highway in between Warren Dunes and New Buffalo. I got the tip from a buddy and agreed it looked legit. Small menu of fried items including lightly breaded lake perch and traditional fish and chips made with cod. Fresh seafood and local meats available too. I enjoyed both fried offerings on a hot summer day before some chill time at the beach. Judging by the constant takeout they're a welcome addition to Harbor Country. 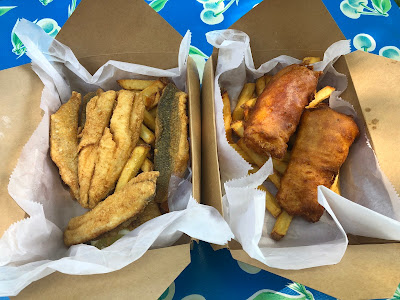 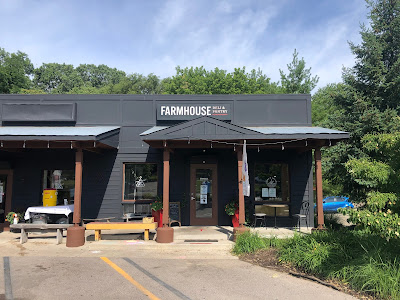 Douglas Michigan is another cute little town that's worth spending a weekend in. If you do then check out Farmhouse Deli & Pantry for lunch one day. This is kind of the prototypical lunch option in Harbor Country if you ask me. There's lots of spots like it but they're not all the same per se. Farmhouse features a ton of Michigan products such as Great Lakes Potato Chips which are quite possibly the GOAT of bagged chips. Aside from a deli case with salads, meats and such they also have cold and hot sandwiches and fresh squeezed juice drinks. Their most popular offering is their version of a banh mi which isn't authentic at all in terms of the bread used (Dutch Crunch Roll) but they nail it in terms of deliciousness. House smoked pork with good smoke flavor is dressed with pickled carrots, pickled radish, pickled cucumber, greens, jalapeño, cilantro, sriracha mayonnaise. I'd advise to order ahead. 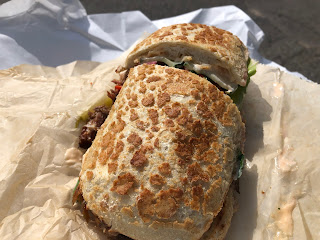 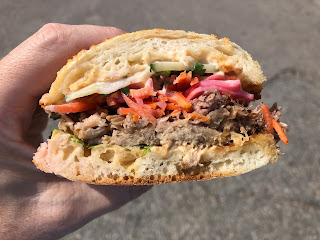 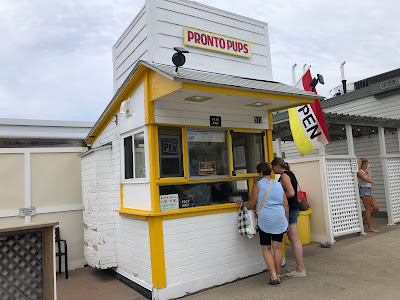 This little corn dog stand sits on a public park overlooking the Grand River. It's been a part of Grand Haven summers for a really long time. So when I walked up and found a line with news cameras interviewing people I assumed they had just opened from quarantine shutdown or something. I watched a blue collar local walk away with five and chow them down solo at a picnic table. He must've really missed them I figured. It wasn't until after I too enjoyed my unique pancake battered pronto pups (hence the name, they cant call them corn dogs) that I learned that news cameras were there bc the day before the owner had posted a racist rant to the businesses social media account. Apparently the dumb ass meant to post to to his personal page as if that's any type of excuse. Look they were good for what they were. Cheap hot dogs battered and fried fresh but I for one want to know if a place I'm supporting is part of America's ugly problem bc I don't want to support these people in any type of way. Some will cry cancel culture but it's in fact enacting the freedom to say "Fuck You". 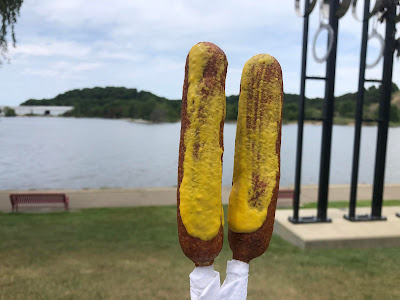 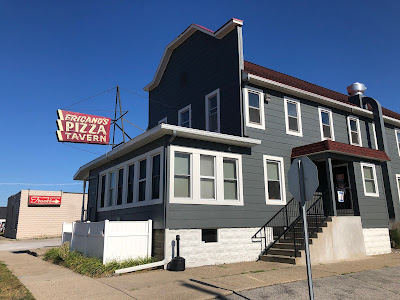 Return trip to what some call the best pizzeria in all of Michigan. I first visited close to a decade ago and loved the classic atmosphere as well as the minimal menu. They offer pizza and drinks and that’s it. You can choose from just five topping options including anchovies. Also there’s just one size. Founded in 1949 by two brothers who decided to introduce Western Michigan to a Sicilian style pizza their family made and the rest is history with multiple locations today. That said the original here in Grand Haven is the one you want to try as the atmosphere is as important as the pizza. It was weird seeing the house empty but they were still churning out 100s of pizzas for takeout. The most popular order is “EBA” or everything but anchovies. But I had that last time and it was too much toppings. I think two is the most a pizza should have. So for this trip I chose sausage and green pepper. They load up the sausage with seasoning mix they call ‘birdseed’ that seems to be a dried Italian herb blend. It’s pretty potent in a good way and when ate with the sausage and peppers it tasted like an Italian Sausage with sweet. The pizza is extra thin but not cracker crispy or cut in squares - how I like it. That said between the unique style and the throwback dining area it’s worth a stop for sure. I love how they still cut the pies with scissors. Best pizzeria in the state? Maybe outside of Detroit. 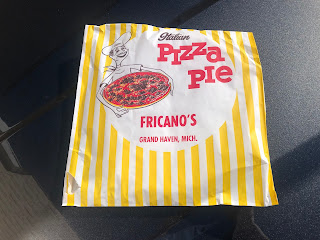 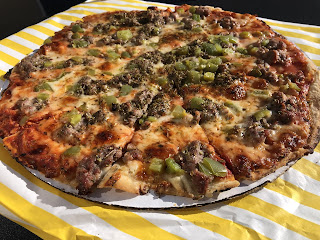 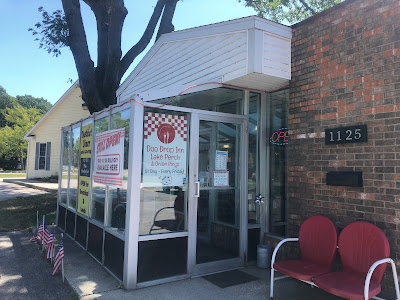 The Friday Night Fish Fry at Muskegon's Doo Drop Inn was iconic. Featuring freshly dusted lake perch and also a popular onion ring recipe made the long gone bar one of the most popular places in Western Michigan on Friday nights. But the lake perch and onion rings live on at Tootsie’s Diner also in Muskegon. I can see why people like both recipes so much. The fish has a nice light crust that lets the fresh lake perch shine. It wasn’t crispy but it was extra tender. Friday’s only in Pure Michigan. 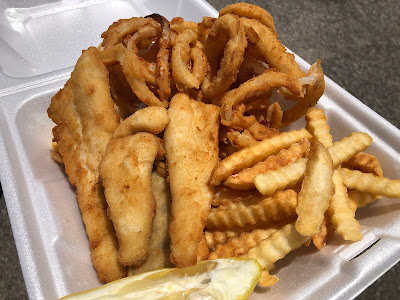 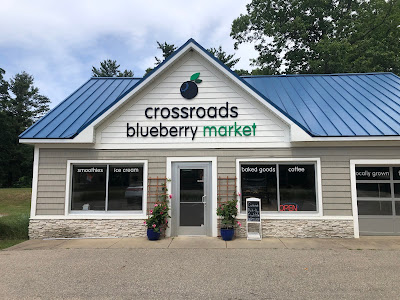 If you're in these parts during the blueberry season there isn't anywhere that does them better. Michigan grows more blueberries than any other state and a large number of blueberry farms are found in Western Michigan. I stopped into a couple and found the blueberries to be best from the Crossroads Blueberry Market which also makes great blueberry donuts. I'd read that a place called Jawor Brothers rolls their pie crust by hand so I made it a point to stop there and grab one. I should've got the large instead of a small. Bomb blueberry pie and vanilla ice cream is a killer combo. 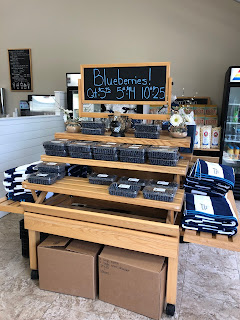 I want to thank Dr Emu a very powerful spell caster who help me to bring my husband back to me, few month ago i have a serious problem with my husband, to the extend that he left the house, and he started dating another woman and he stayed with the woman, i tried all i can to bring him back, but all my effort was useless until the day my friend came to my house and i told her every thing that had happened between me and my husband, then she told me of a powerful spell caster who help her when she was in the same problem I then contact Dr Emu and told him every thing and he told me not to worry my self again that my husband will come back to me after he has cast a spell on him, i thought it was a joke, after he had finish casting the spell, he told me that he had just finish casting the spell, to my greatest surprise within 48 hours, my husband really came back begging me to forgive him, if you need his help you can contact him with via email: Emutemple@gmail.com or add him up on his whatsapp +2347012841542 is willing to help any body that need his help.