I had mentioned in a previous post how I set out on a lunch special-special. A round-up of the best lunch specials in the city. During research on where to find the answer I came upon a newly opened Middle Eastern restaurant in Albany Park. Like the other popular kebab spots in the area it's on Kedzie. Except Karam Grill sits in the strip mall just N. of Lawrence. They opened three months ago. 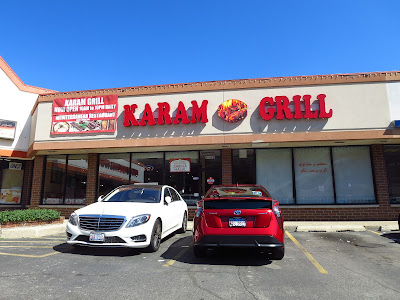 I was instantly intrigued when I saw this place. Kebabs have to be one of the best semi healthy meals out there. Just good old fashioned grilled meats with lots of rice. Nothing fried unless of course you want some falafel. Karam Grill offers what they call a Middle Eastern menu. I asked the young lady working the register where she was from and she told me Jordan although you'll notice a few maps of Palestine hanging as well. The fact of the matter is the food served in these countries can be very similar from spot to spot hence the cuisine being called Middle Eastern. Where Karam Grill stands out above the other spots in the area is in the shawarma department. Get the lunch special featuring both beef and chicken and you'll be rewarded with a heaping plate of freshly cut shawarma for $6.99! 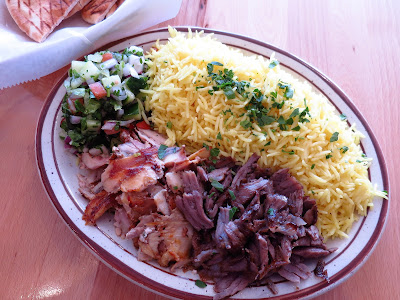 I could tell the shawarma was cut fresh and never saw a flattop. It was near perfect in texture. It was so good I made sure to return a week or so later for some kebabs. They offer all the usual suspects. The best way to get a taste of as many as possible is the Mixed Grill combo platter offering Kufta (ground beef/lamb), sirloin, and chicken kebab. It too is a heaping plate of food but not quite as big of a bargain as the lunch specials. Everything was grilled perfectly and I liked the Kufta the most. No surprise as this is my go-to item at the other spots in the area such as NOK and Kabobi. In fact I wouldn't be surprised if Karam Grill has some sort of relation to one of the other spots. That said there's some things here such as garlic sauce that made me wonder is there a connection to Michigan? Dearborn to be exact. Which for those who didn't know is the country's center for Middle Eastern food/culture. One of the things you'll find at every shawarma shop there is white garlic sauce. 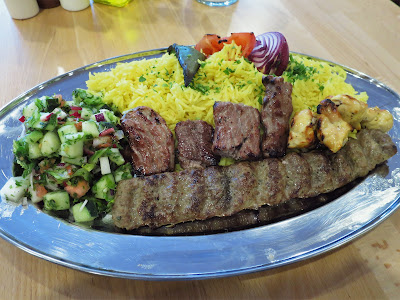