I'll come out and admit it right away. I'm not the biggest fan of Eastern European food. While I do like to enjoy it from time to time (winter) it's not one of my favorite styles of cuisine by any means. So after reading some enthusiastic reviews of Astoria Cafe over on LTHforum I was slow to go check it out. About a month or so after it was on LTHforum Mike Sula was there getting the full story. His review which can be seen HERE was still not enough to get me in right away though it made sure I was eventually going to go. This summer my friend came in from Barcelona and his GF is from Croatia so he's gotten familiar with Eastern European cuisines since being with her. Burek is one of his favorite bites and his mentioning of that reminded me I needed to go over to Astoria Cafe. I did. 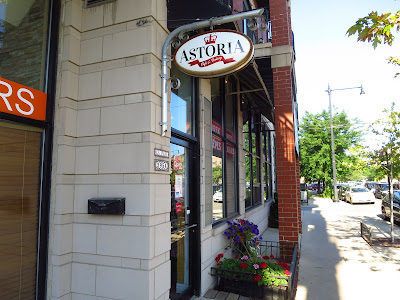 The story of Astoria is a good one. You can get the complete details from the previously linked article in The Reader. Long story short this bakery is a mother / daughter operation by way of Detroit and Germany and then Serbia before that. When they arrived in Chicago the mother took a job at a different Balkan spot across the street. Eventually they saved enough to open their own spot which is where we are today. The menu is a heavy hitter of Serbian classics. I still need to try the beast that is the komplet lepinja (see the Reader article) but I'll need to get past the burek to do that. Burek being a stuffed phyllo dough pastry that's extremely popular in the Balkans. On my first trip to Astoria I wrestled back and forth in my mind about whether to try the beef or the potato based option. I settled on the potato and onion. The Burek is baked fresh so I had to wait 25 minutes or so but it was more than worth it. With this being basically just diced potatoes and sauteed onions layered in dough I couldn't believe how good it was. It took on similar profile to a UP Michigan style pasty but this was so much better. The potatoes were perfectly al dente and the onions extra potent. Wow. I'll be back. 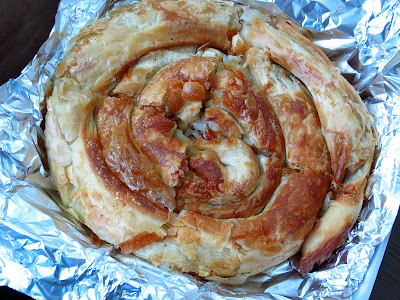