It took some time but the space that used to house an old dive called The Beechwood Inn has come back to life. This time in the form of a shiny new New Orleans inspired tavern. We had a chance to check out Ina Mae's one hot day this past summer. I like what they did. I did feel a bit of Nola vibe via the design of the place. Though it was empty on our visit it was also opening time on a weekday. 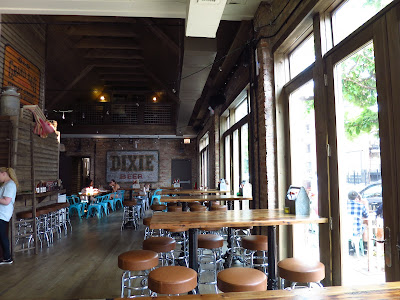 Ina Mae's is the second spot from the chef behind Frontier. Chef Brian Jupiter has developed a name for himself at Frontier doing things like exotic game, and crawfish boils and such. The fried chicken is considered by many to be the best in the city. It makes an appearance on the Ina Mae menu. It's an ode to New Orleans with most all of the classics making appearances. You know the drill. Gumbo, Po Boys, Fried Shrimp, and more. Maybe not as much more as I'd like. I was hoping to see a few hyper local favorites on the menu. Something like Ya Ka Mein which I suppose could still make an appearance this winter. Nonetheless the area gained itself a great place for fried seafood. The 1/2 lb plate of fried catfish was as good as I've had here in the North. I'm confident the rest is just as good. 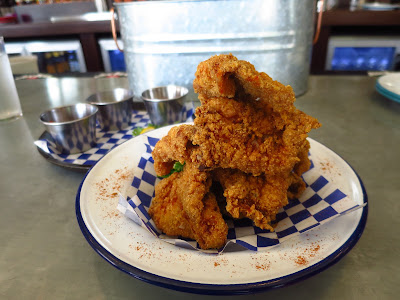 I had to make a tough choice between the gumbo and the shrimp Po Boy and ultimately settled on the Po Boy. To go along with it I also got a side of dirty rice. One of my favorites. The rice wouldn't live up to the stuff at the long gone Analogue but it still hit the spot in the way that New Orleans style food most always does. The Po Boy had strengths and weaknesses. The strength was in the fried shrimp. They were just about perfect. But I felt like the bread could've been better. D'Amato's maybe? Still though we aren't in Nola. It was damn good for Chicago. It just needed some crisper bread. 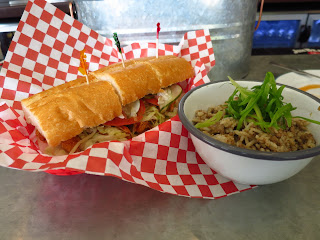 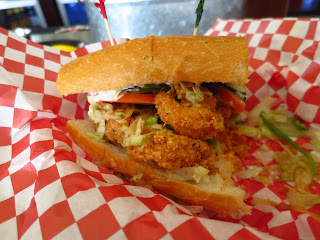 There is one hyper local Nola dish that they recreated. The famous SnowBalls found all over town. The mounds of shaved ice flavored with sweet syrups and evaporated milk and such. It's a Nola tradition that goes back to the 1930's. I did a little SnowBall tour once and loved doing so. Many of the spots down there are classic old school joints that have been around forever. I couldn't resist one from Ina Mae so I went ahead and got Tiger's Blood which is a popular (fruity) flavor down there. I loved that they serve them from Chinese takeout containers which is what the famous Plum St. Snowballs does. Only problem was the containers weren't secure enough and mine started leaking after a minute or so in the 90+ degree heat. It's a problem that's easily fixed and thus I'm sure I'll be back next summer for another. In fact this is the type of spot I'll probably get back to a few times. 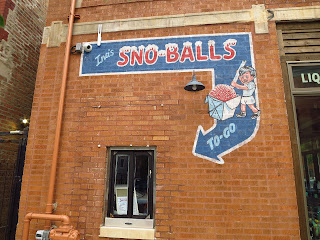 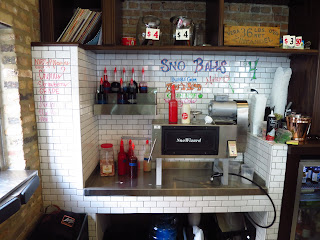 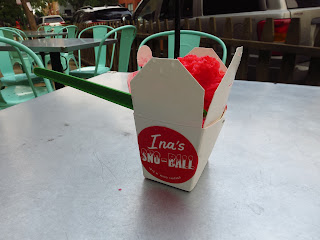