Sweet tasting Chicago. You know all about the Italian beefs, hot dogs, pizza pies, tacos and even the Big Baby, Mother-in-Law and the Freddy. But today's post is all about the great unknown. For those of us that live in a different Chicago, the one that doesn't make the news as much, this is for the most part a foreign sandwich. It'd be that way to me if not for the great Peter Engler, the man who introduced Anthony Bourdain to the Mother-in-Law is also responsible for introducing 100's of us to the Jim Shoe. Or is it the Gym Shoe? No one's quite sure. It took Peter close to a decade to dive into the history of this sandwich which is typically found at sub shops located mostly on the city's south and west sides. Another common trait amongst the places that offer this sandwich is they tend to be Pakistani owned. That much we know thanks to Peter who's complete report can be found HERE. You're probably wondering what makes a Jim Shoe so lets get that out of the way before we check out some spots making them. The main parts to a Jim Shoe Sandwich are the corned beef, roast beef and gyros. No you don't choose which one you want, they come with all three. Toppings vary but standard orders incl. lettuce, sliced tomato, tzatziki sauce, mayo or bright yellow mustard while stuff like cheese, onions, and giardiniera is sometimes used. Mess is an understatement.
______________________________________________ 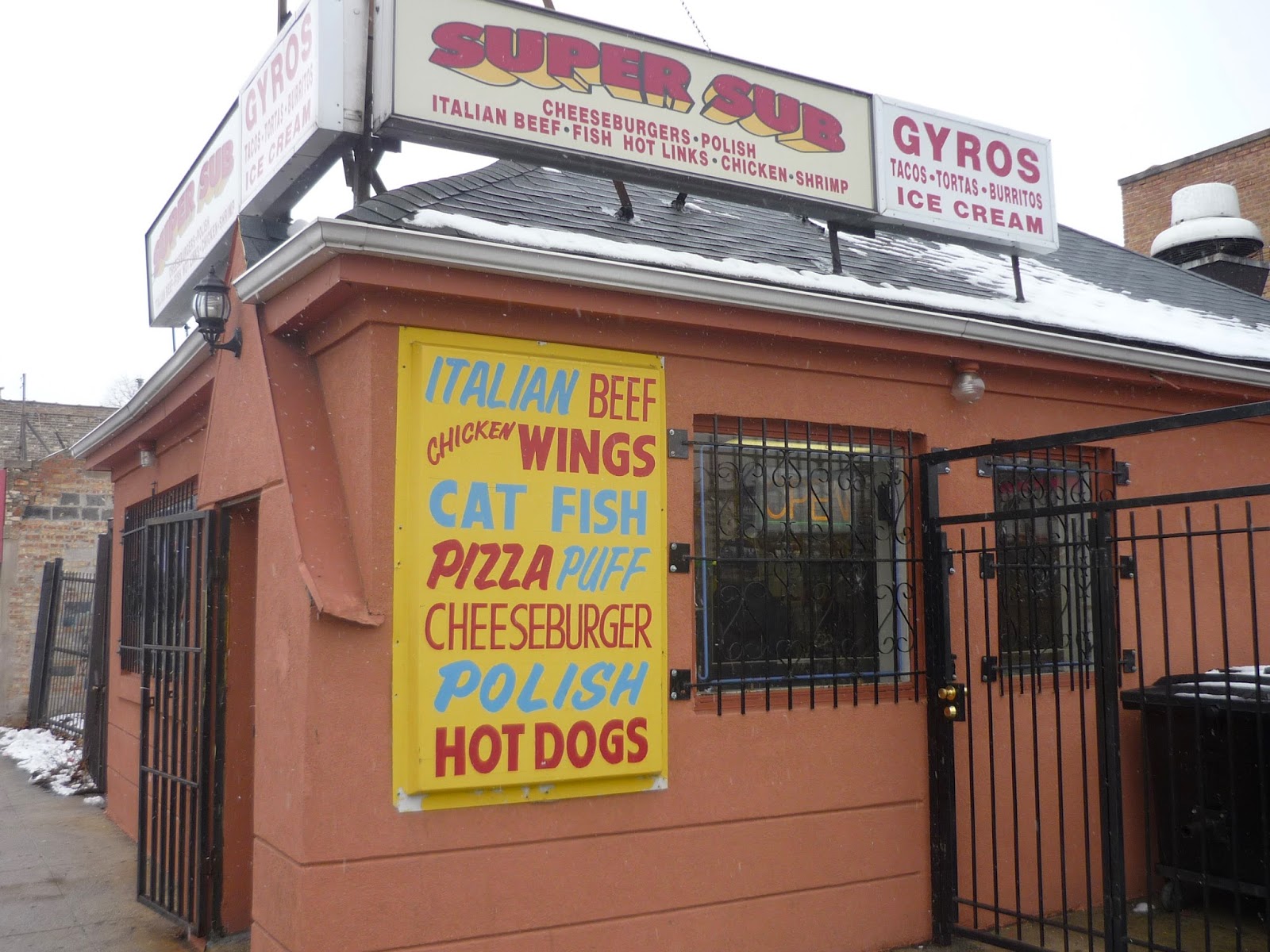 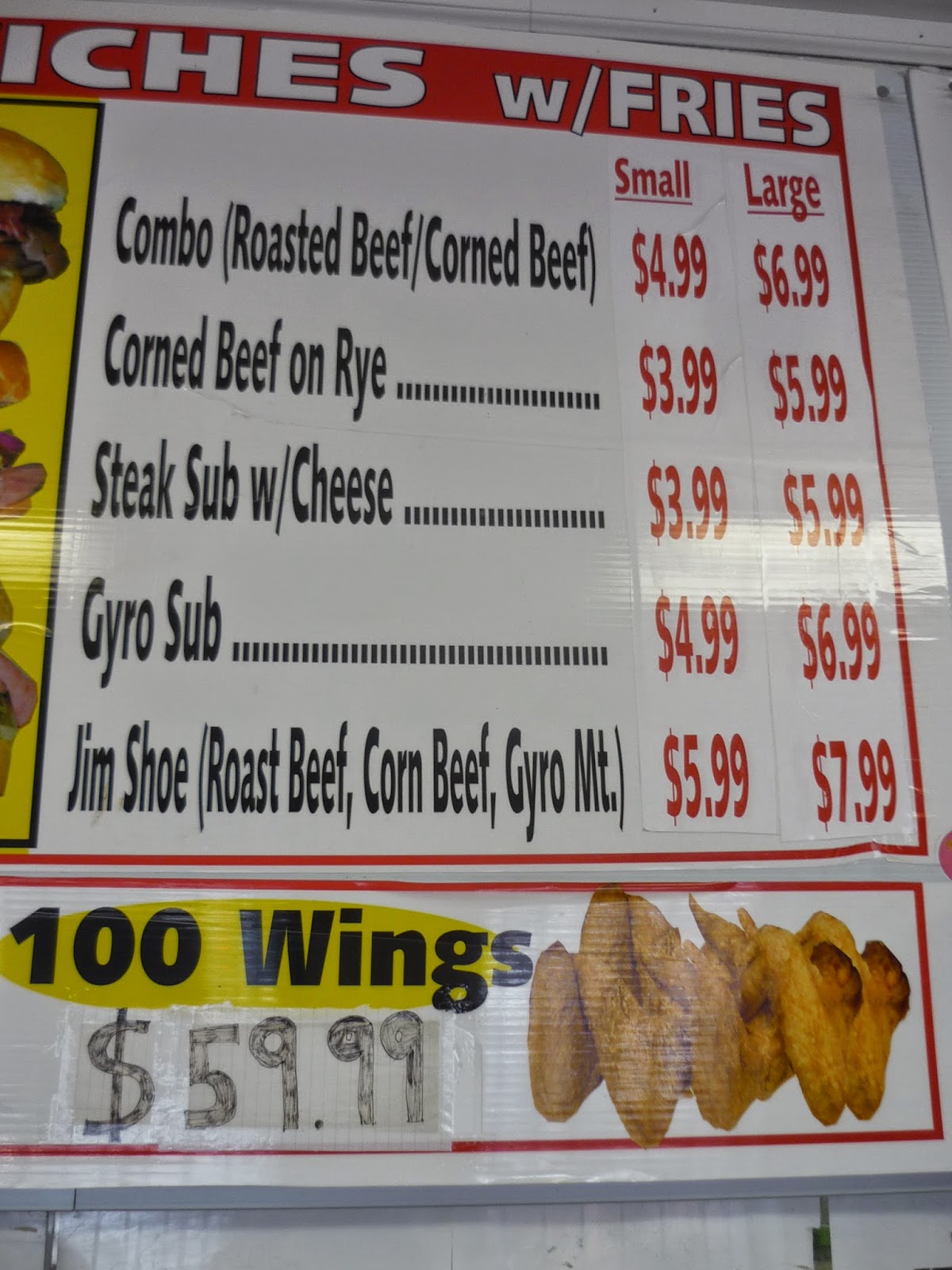 Jim Shoe listed on the menu

My first ever Jim shoe sandwich was consumed with the man who introduced me to them. I joined Peter and a couple other explorers for one at a place he would say has one of the better Shoe's in town. They also offer a Super Jim Shoe taco which is the same as thw sandwich except it comes on pita bread instead of the sub roll. The super taco is a pretty common offering at these shops but this is the only place I've seen them making a Super Jim Shoe Taco. While we contemplated ordering it in line the guy behind us said "you gotta do it, they're the best" but due to the fact me and one other were Jim Shoe virgins we had to go with the sandwich which the guy in line totally understood. He was impressed we were there indulging in one. The friendly proprietor behind the bullet proof glass took our order laughing as they got to work on it. 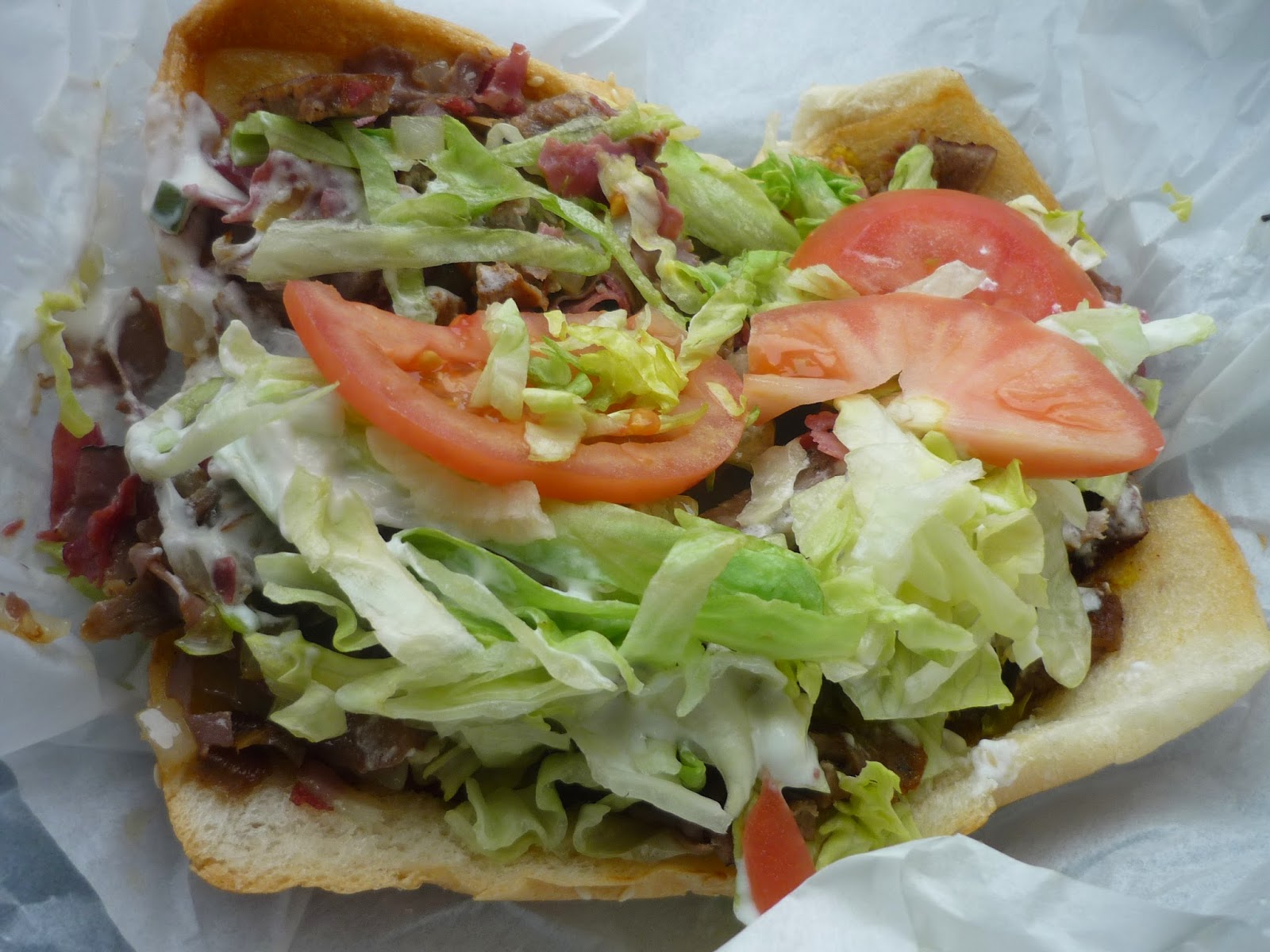 Super Sub does a really nice presentation and good overall tasting sandwich. How each place makes a Jim Show varys as far as technique. At Super Sub they throw the meats on the griddle and chop them down into a taco filling consistency before adding the layer of gyro sauce (tzatziki), lettuce, tomato and whatever else I'm forgetting. To date this is the best Jim Shoe I've ate but it gets crazier than this. Another common item offered at these sub shops are deep fried cheese steaks. I don't even know if they offer these at the State Fair! Insane but people order them. They take everything that makes a cheese steak and stuff it into a tortilla like they're making a burrito except instead of ending it there they place it in a deep fryer basket and place another basket on top, this prevents it from opening, and deep fry the entire thing. Not listed on the menu we asked if they could make us a deep fried Jim Shoe and the guy happily obliged while other customers were in awe. 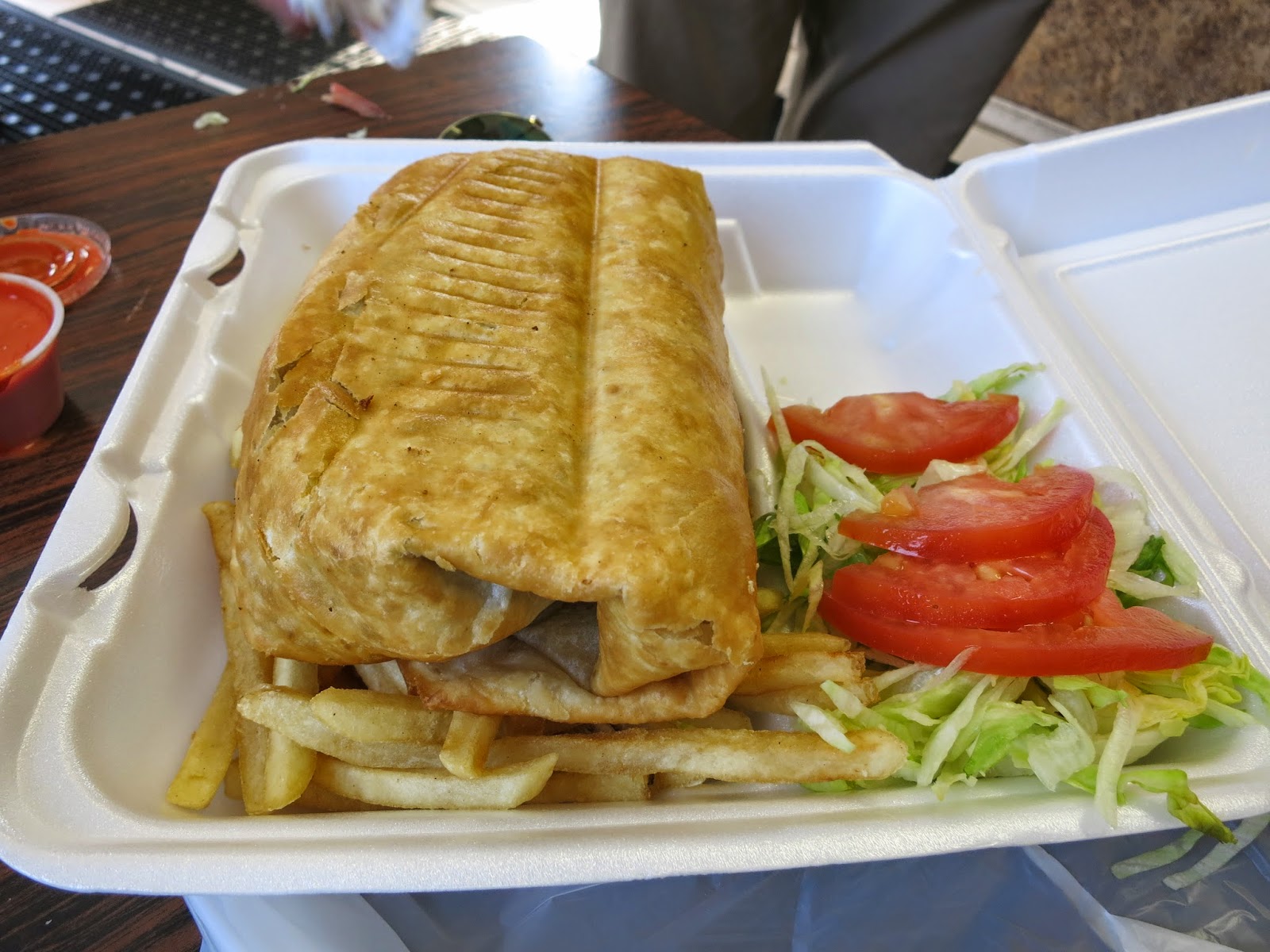 There was no warning label on the box but if these things take main stream best believe some congressman out there will be pushing for a label that lets you know the health issues you can have if you eat too many of these. That said, you kind of got the feeling that it could be good and it was. 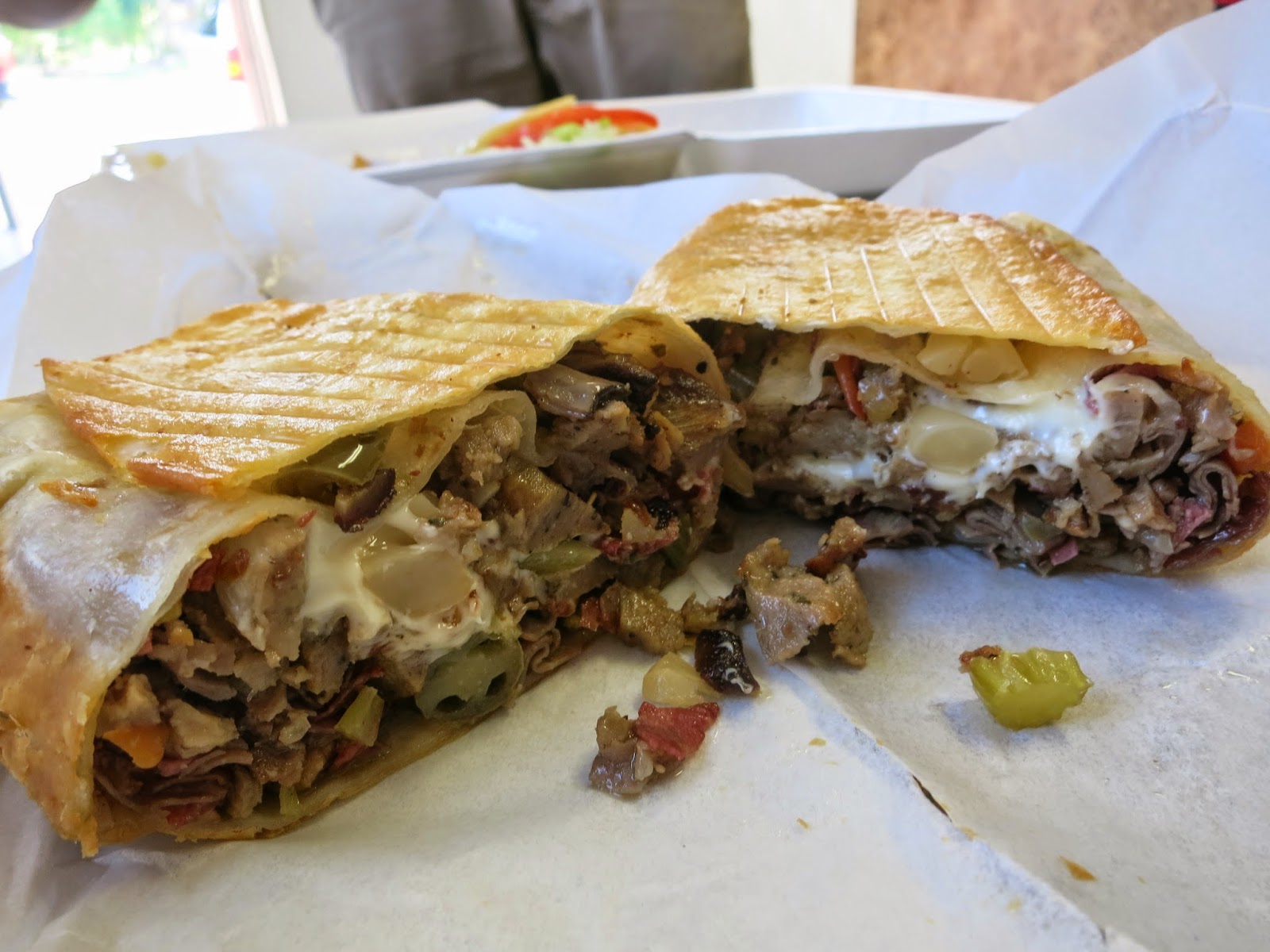 This 24 hour shack boasts some of the best artwork which is a common characteristic at many of these southside eating establishments. Peter, who happens to know everything, mentioned that it's one guy who does them for most of the spots. No Jim Shoe listed on the outside but we were there for one and when we stepped inside they had Peter's report printed out and taped to the glass. I asked and another customer brought it in and they were very happy to see. As Peter described it "Stony Sub’s sandwich is exceptionally generous, well chopped and griddled, extremely juicy, and bursting with giardiniera." This was much messier than others though it's description is on point. 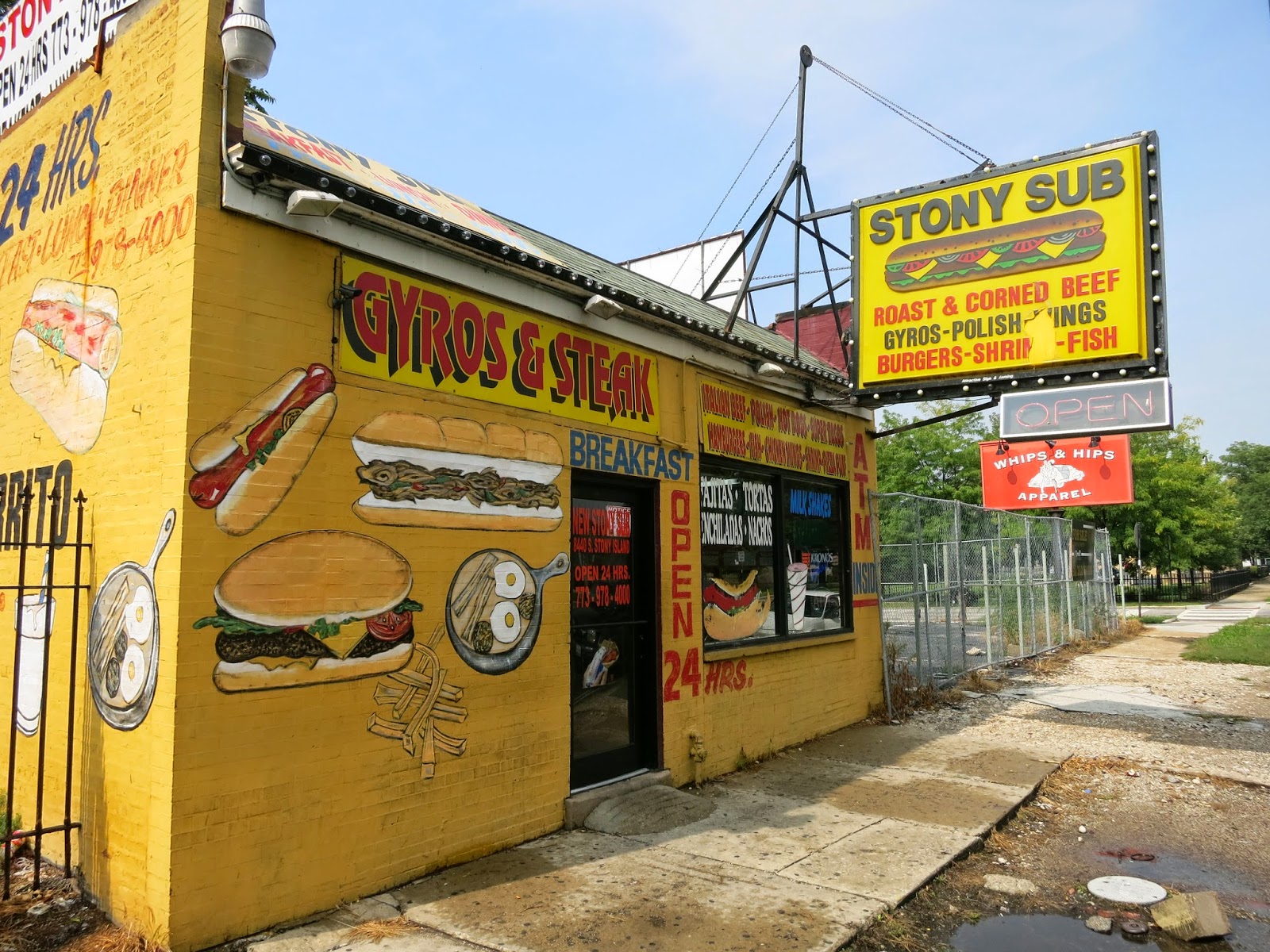 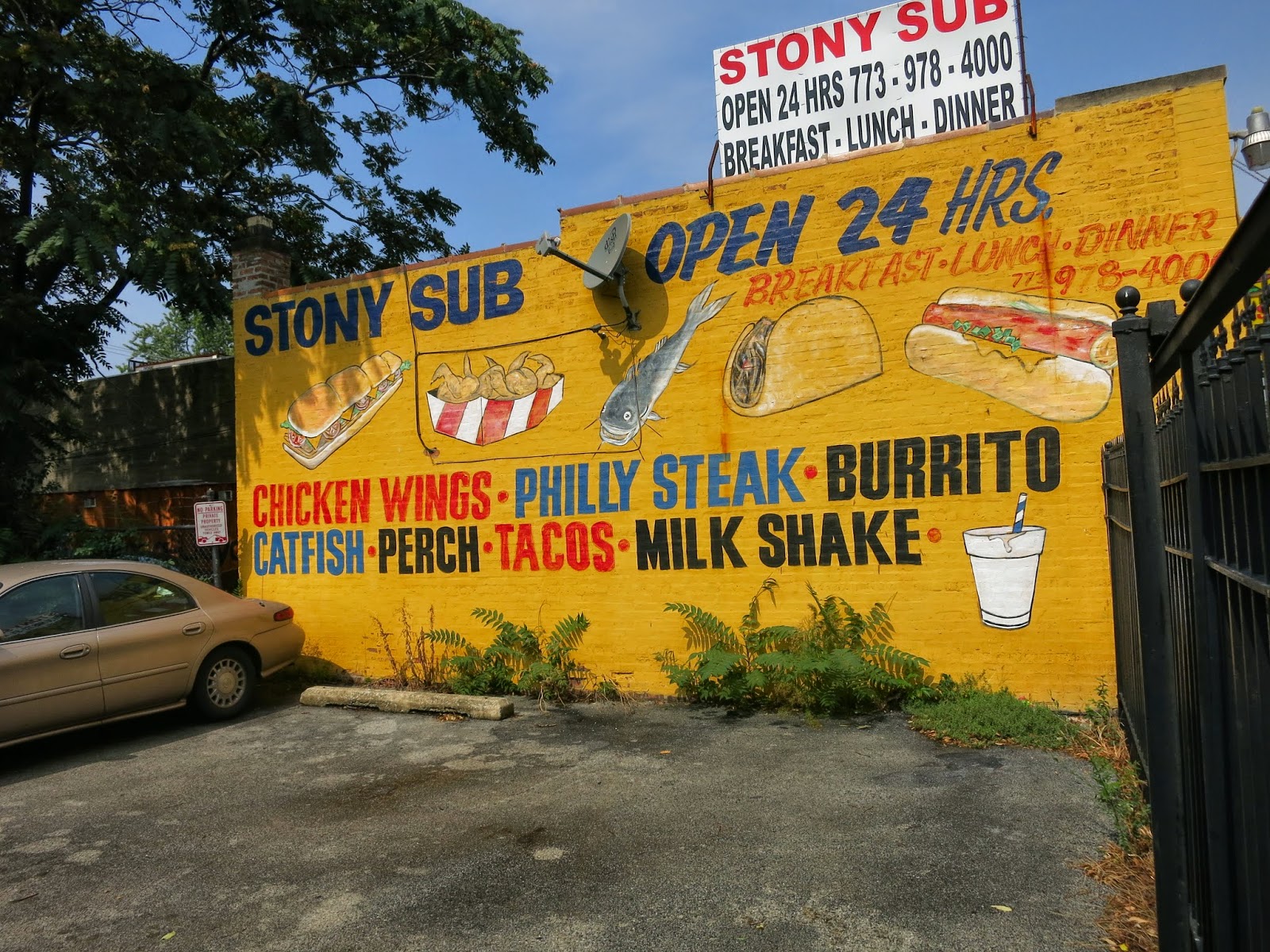 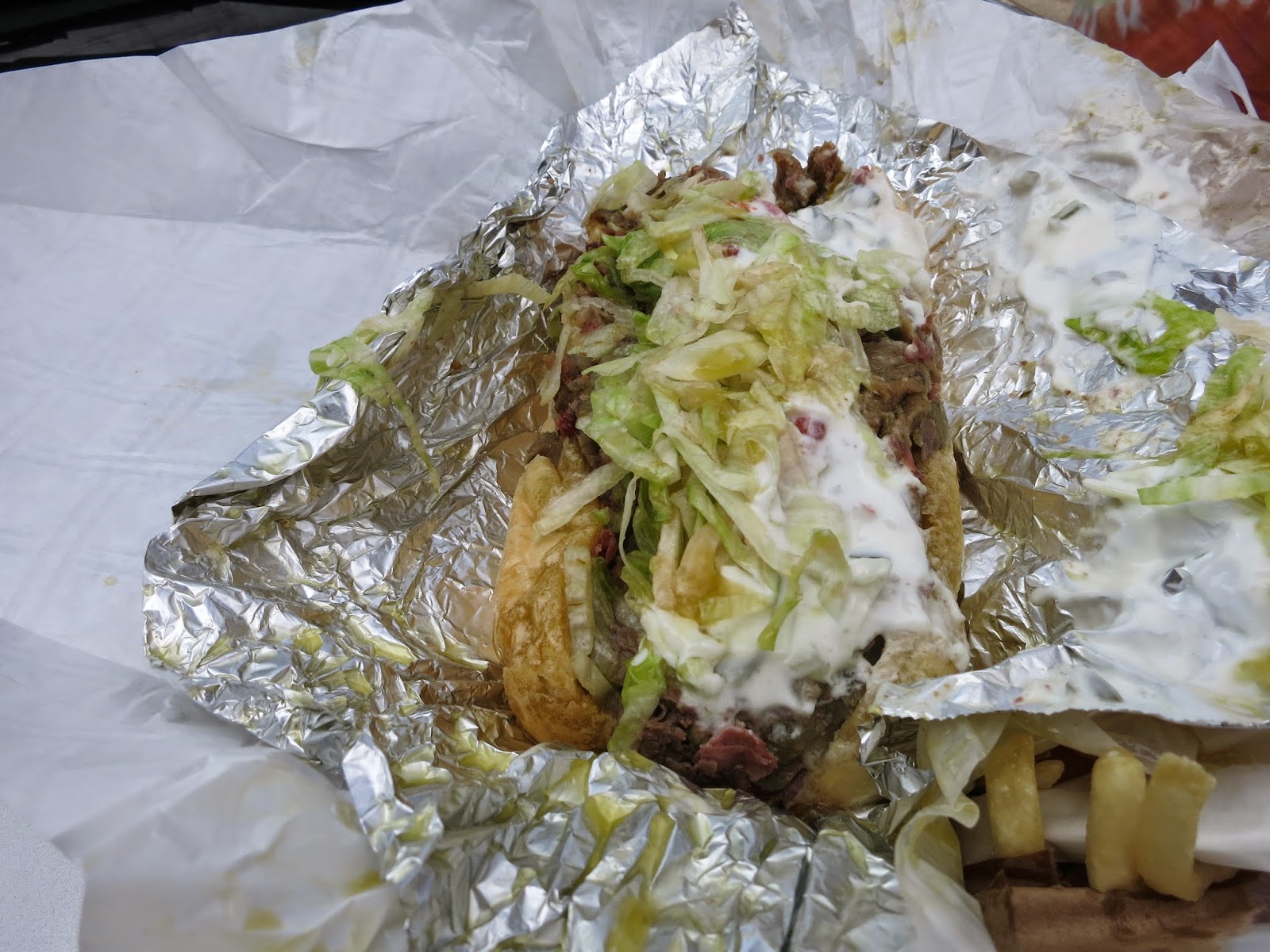 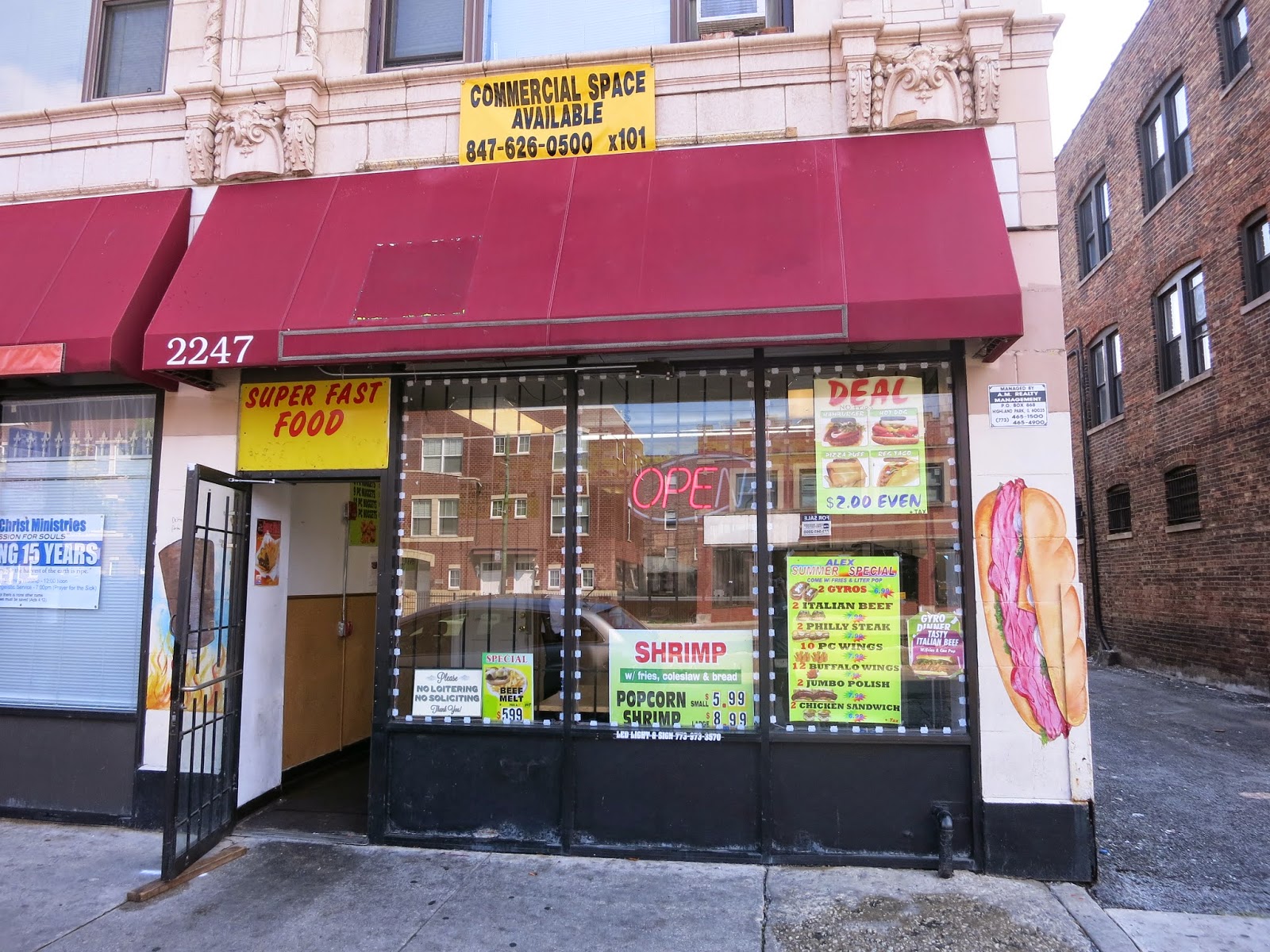 Located on 71st Street in the South Shore Neighborhood

We stopped into this spot on a later excursion that was trying to get to the bottom of the sandwiches origin. As of then it was Peter's belief that it may have started somewhere in the Roseland neighborhood but there was a reason that we were here. I don't believe we ever did find out what we were there too but we did enjoy a pretty decent Jim Shoe. Further proof that no two shoes are the same as this one was really lacking in the toppings and bread department but the finely chopped meat is my preferred way of eating one. Unfortunately the bread couldn't hold this monster together. 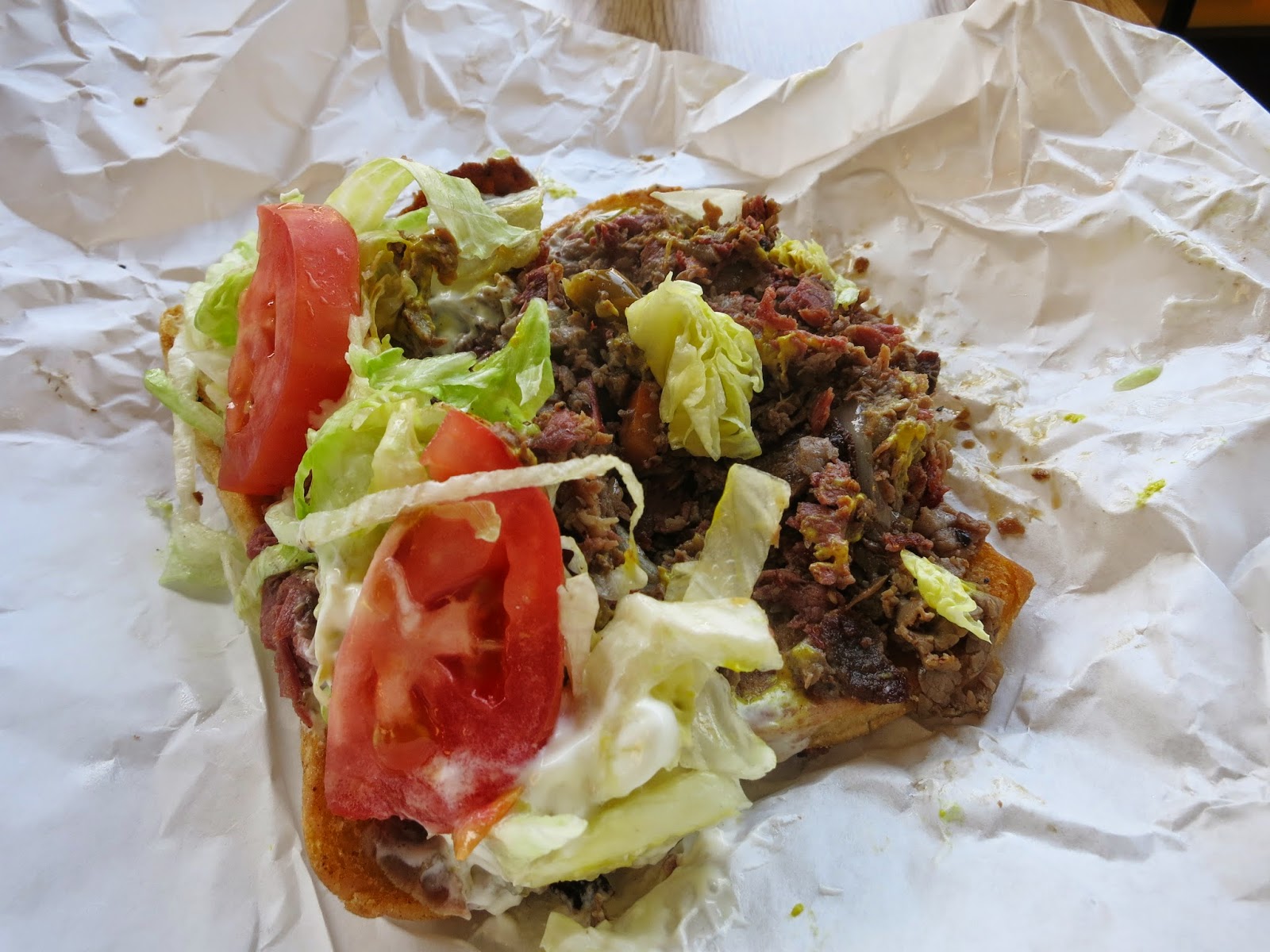 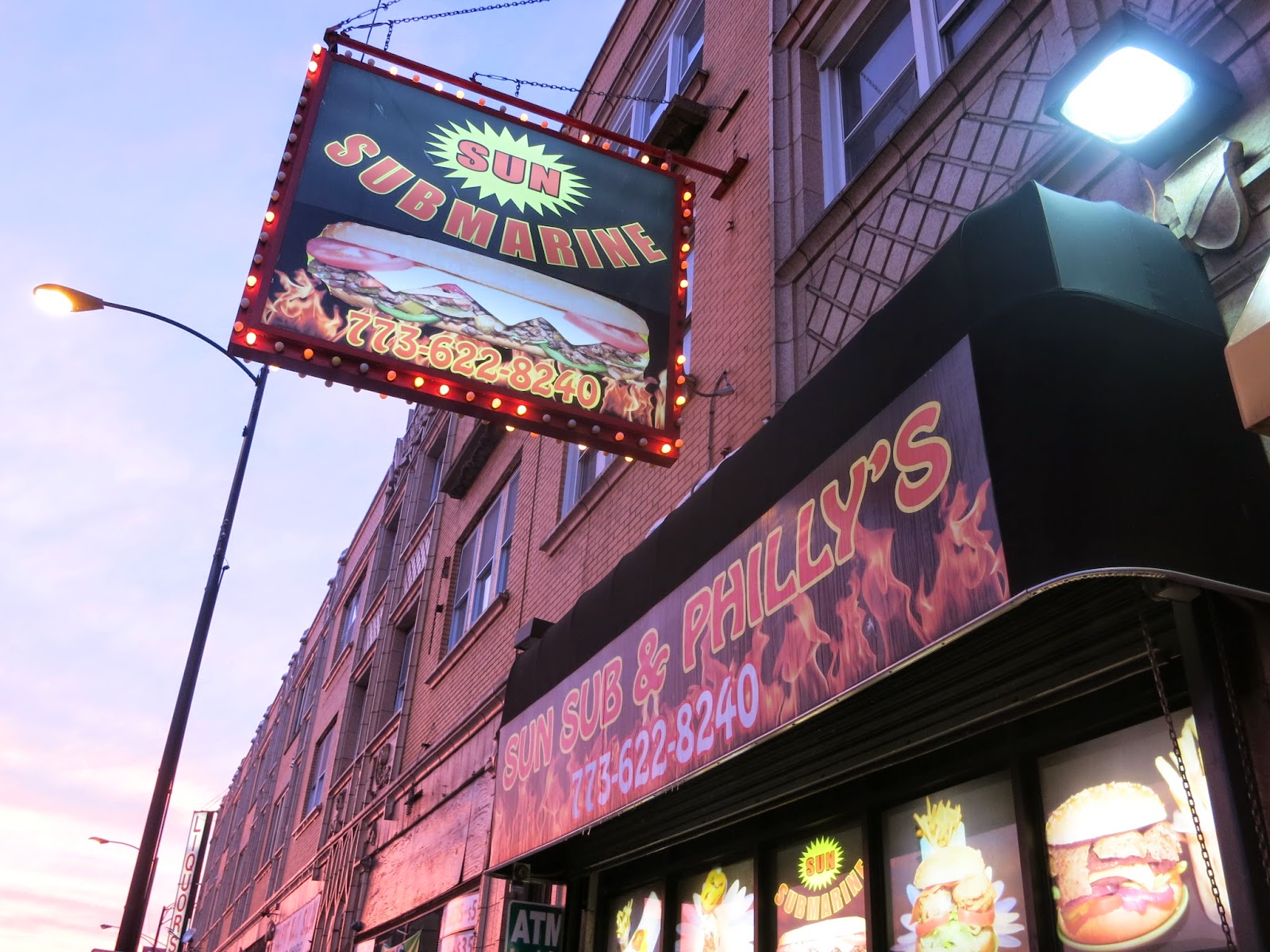 Mini-Chain on North avenue in the Austin neighborhood 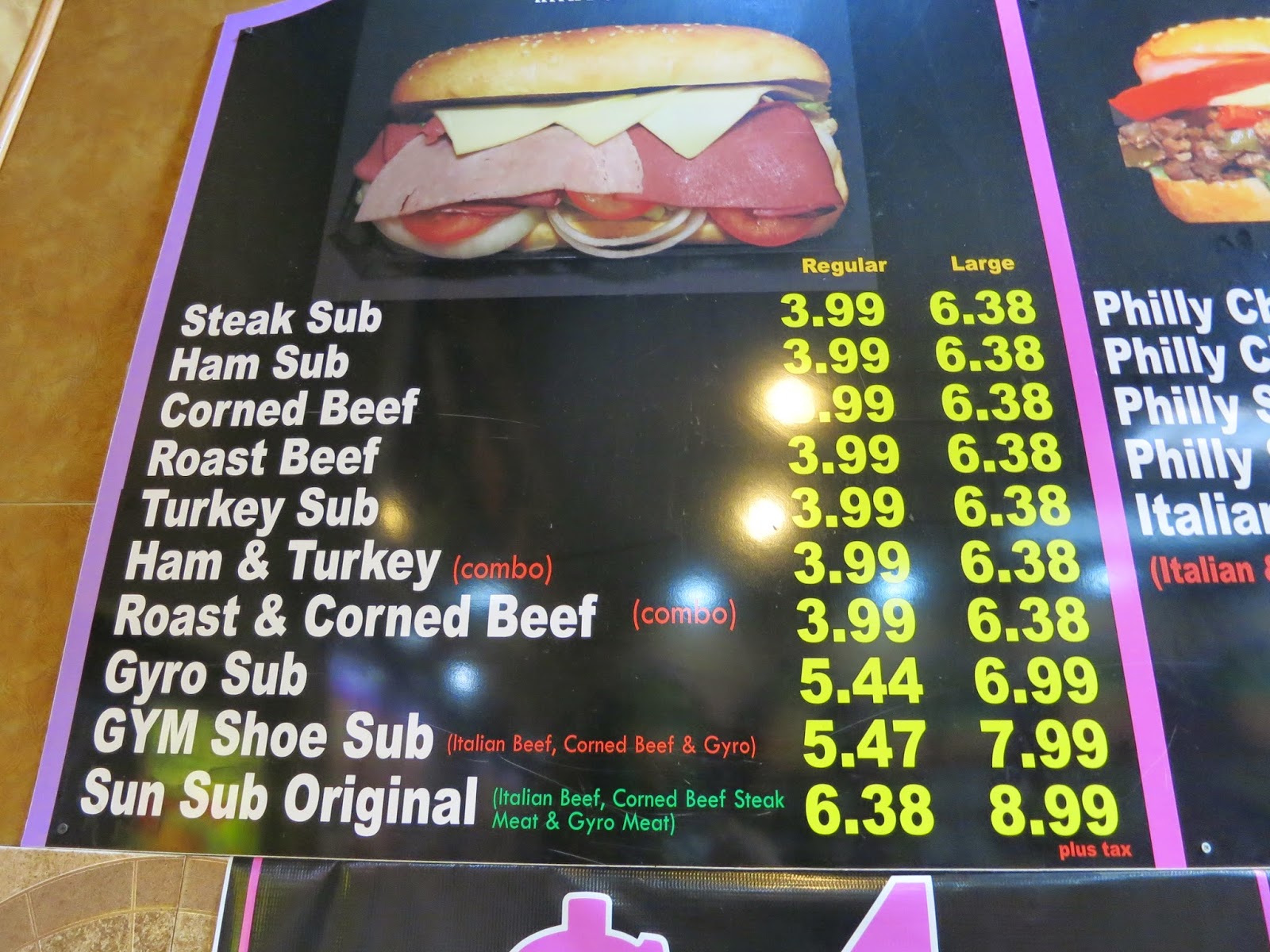 "Gym" Shoe Sub on the Menu...or go one up and get the Sun Sub with steak meat included too

Jim Shoe's aren't local to just the southside, while it's most likely they started somewhere over there they've flocked all over the city and even across state lines. In Austin there's a place called Sun Submarine that was profiled by Peter in his report. As far as the pictures go this one looked the most delectable, go ahead and laugh but it really looked good. Specifically the chopped meats inside a perfectly toasted sub roll. I rolled into here on Super bowl Sunday last year with a Jim Shoe virgin named Jim. While it wasn't nearly as good as it looked nor quite as finely constructed as my first and to date best Jim Shoe ate, it was a nice soaker-upper for the shots of booze that ensued. 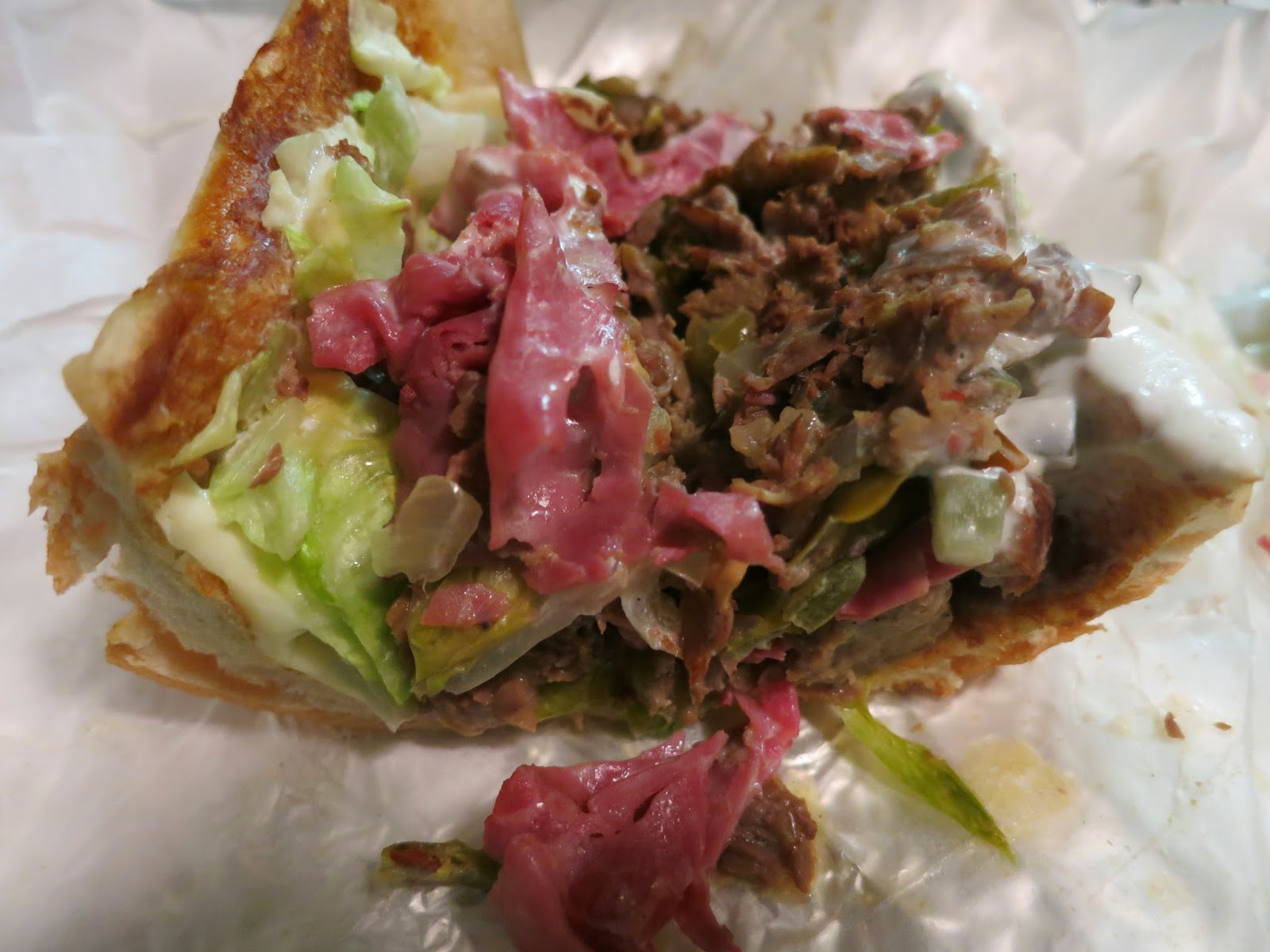 Just like Chicago style hot dogs and also Italian beef once did, the Jim Shoe has started to become a little more well known. I've seen it on menus at Halal fast food shops and even at Submarine sandwich stops in Milwaukee. Others have chowed on them in Indianapolis and I've said before that in time you'll see them pop up somewhere very mainstream. Maybe a cocktail bar or some yet to open place that tries to elevate Chicago style street food. Stay tuned, more shoes to fill. 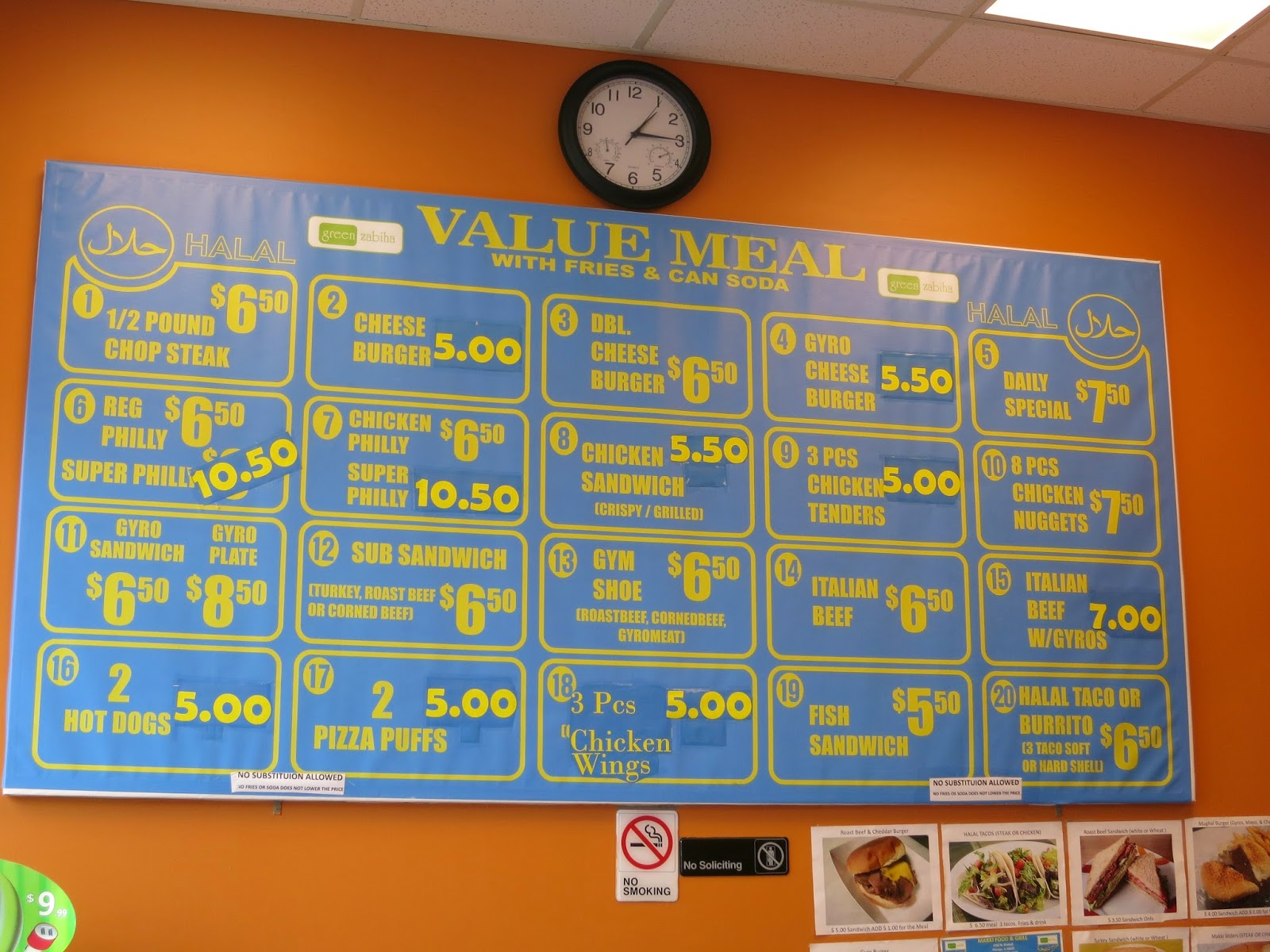 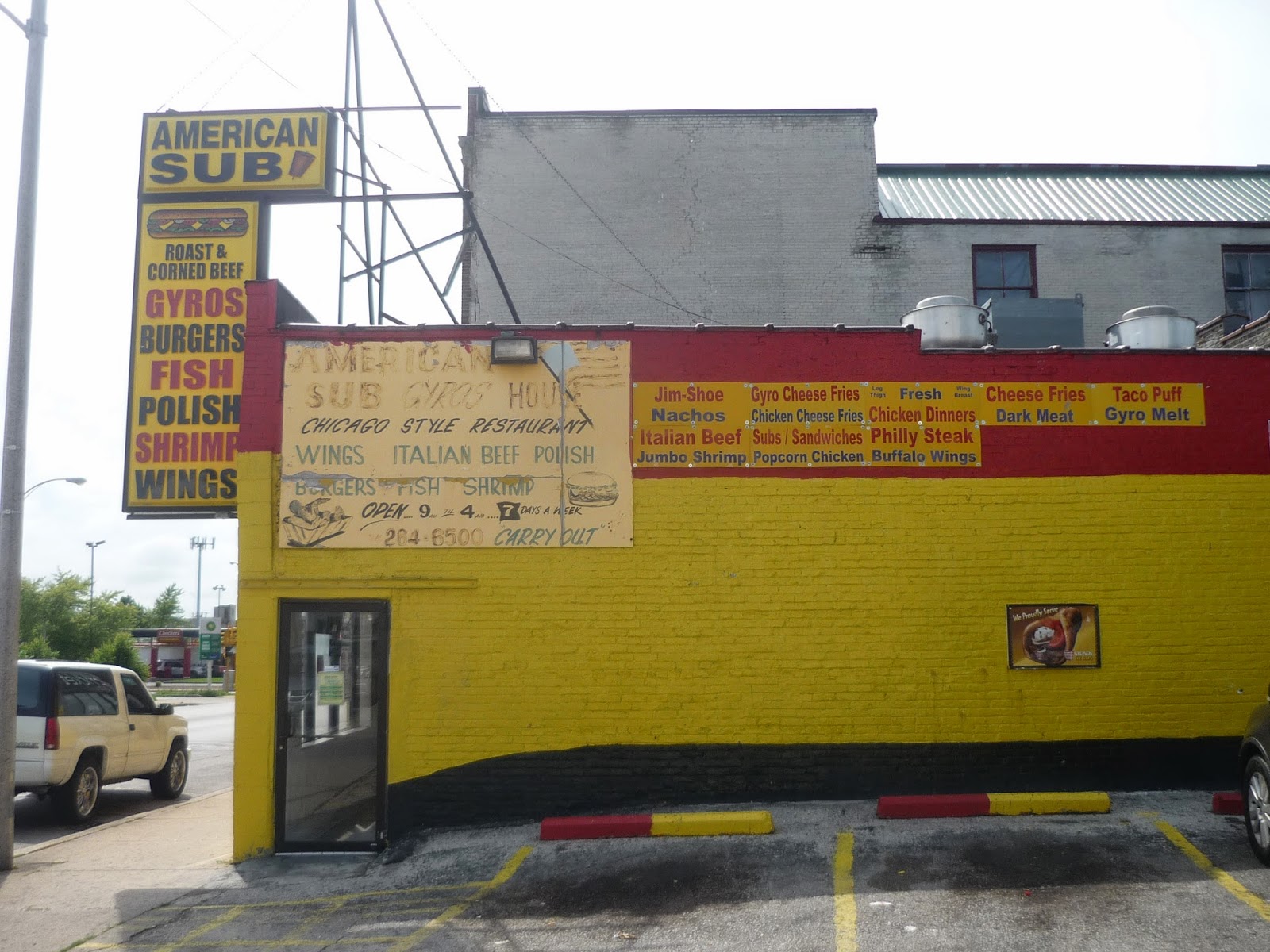 Are there any places in Las Vegas that make a Jim Shoo Sandwich?

Sometime few educational blogs become very helpful while getting relevant and new information related to your targeted area. As I found this blog and appreciate the information delivered to my database.
รองเท้าบอล adidas