I'd driven by the intersection of Armitage and Kimball countless times watching the building on the SE side of the intersection get rehabbed into something that looked like it might be a nice addition to the area as far as a food goes. I tweeted how I was intrigued about it and Tony at Cemitas Puebla replied back that the guys who own Armitage Produce owned the property and a tortilleria was coming. Sweet! Always down for a place slanging fresh masa in the vicinity of the near north side. I drove by recently and was pleased to see it's not only a fresh masa shop but also a restaurant. 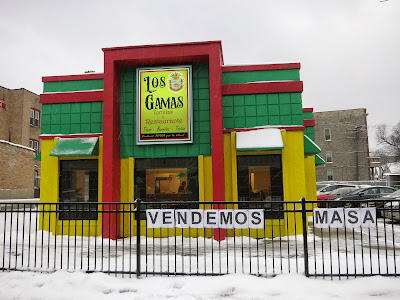 Los Gamas Tortilleria Y Restaurante is the name of this new locally owned Logan Square business. They sell freshly ground on the premises masa by the pound ($.65) as well as tamale husks and dried hominy for pozole. I didn't see ready to go tortillas for sale but wouldn't be surprised to find them across the street on the shelves of Armitage Produce. 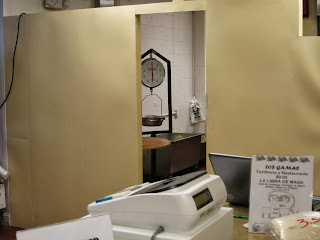 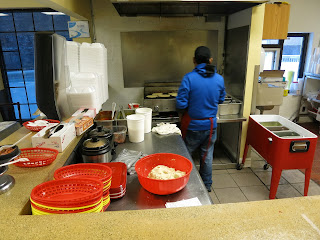 As seen in the picture up above they have a bowl of masa which is used in most every recipe on the menu. Notice the scale in the top pic which sits next to a huge tub of it. Tacos, Sopes, Tamales, Picadas, Tortas, Quesadillas, Enchiladas and Burritos make up a simple menu that also includes pozole and menudo on weekends and a breakfast portion with the usual suspects. First trip there I went with a carne asada sope, picada with red sauce and a choriqueso (chorizo and melted cheese) taco. After my order was placed the cook went to work pounding out a fresh tortilla and a couple sopes for my order. 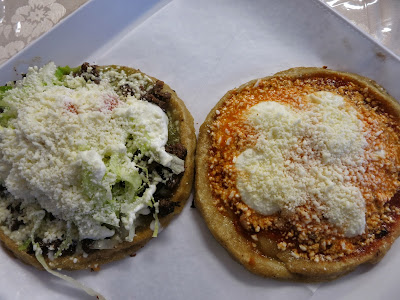 For those who've never had a sope its like a deep dish tortilla that typically gets spread with beans and topped with meat of choice and lettuce, tomato and cheese. This was as good a sope ($2.75) as I've had in the city. It's all about the fresh masa. The steak wasnt grilled to order but did have char flavor and came chopped well so there were no chewy rubbery pieces from sitting around in a steam tray. Picadas ($1.80) are are just a sope with no meat and your choice of sauce (red or green). The choriqueso taco was also very well prepared. The cheese holds all the meat together and the made to order tortilla is able to hold all that together. So you're basically eating queso fundido with chorizo in taco form. How can not that be good? Tamales are large and about as corny as Urkel. It was pretty easy to see by the constant flow of customers this place will be a welcome addition to the area. 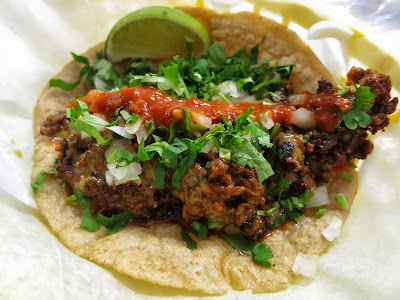 The day my son and I were driving around trying the things in this post-- http://chicago.seriouseats.com/2013/12/investigating-the-promise-of-real-al-pastor-at-mazamitla-and-el-burrito-amigo.html

we saw this place (didn't even have the sign up yet, just the Rasta colors) and pulled in. Unfortunately, I noticed two things that immediately discouraged me-- one, nobody was eating actual food there. Two, the smell of boiling masa was so strong, sauna-like, in the air, that I thought I might puke if I ate inside. I think they just weren't ready for actual food yet and were mainly selling tortillas at that point. Anyway, now I know!